A city ledger logs building inspections for a dairy at 1936-44 Augusta.

Volunteers are making a last push to preserve a longtime dairy and restaurant building before the City Council acts on a demolition request.

Ald. Brian Hopkins has deferred action on a demolition permit at 1936-44 W. Augusta Blvd., but chief of staff Steve Niketopoulos says without new information March 16 vote is likely. MCZ Development plans to raze the building, initially proposing condominiums. From 1985 to 2015, the site was a Leona's restaurant.

Local historians have been trying to flesh out the site's emergence as Pure Farm Products, "the only Ukrainian dairy in Chicago," in the words of a 1924 ad in the Newberry Library's collection.

The building is in the city's East Village landmark district. The Commission on Chicago Landmarks recommended demolition after staff failed to turn up documentation from the district's historical period, defined as "circa 1883-1920s."

Niketopoulos says the developer is "anxious" to proceed, but has not discussed plans since the November demolition hearing. 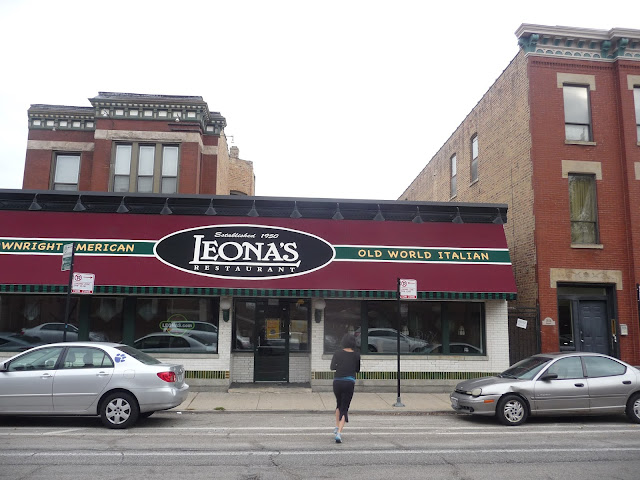 In the Richard J. Daley Library at the University of Illinois at Chicago, I found a card file entry for "enclosing the space between two buildings" at 1942 W. Augusta and a 1930 ledger items for bricklaying and roof work spanning 1936-44 W. Augusta.

The Polish Museum of America is trying to date parade photographs showing the dairy, and families connected to the Home dairy have been searching for photos as well. Longtime neighbor Jeff Kulik has been documenting construction work, including other uses of its distinctive white and green glazed bricks.

Landmark commission staffers have not weighed in on whether the new research makes a persuasive preservation case, Niketopoulos says.

In Our Urban Times, Elaine Coorens suggests that in the days of the milkman, add-ons to a 19th-century structure would have been typical for an emerging wagon-delivery business.

"It appears that this may be the only example of the local dairy left in the City of Chicago," Coorens writes. "People would surround at least three-sides of a two flat then put a roof over the enclosure and it would become the local dairy." Her Pure dairy citations include a 1922 Tribune report on city health inspections.

If the city allows demolition, a new building would have to pass landmarks review. Construction must be in keeping with surroundings. Hopkins would ask the developer to consult with the East Village Association on design, Niketopoulos says. An early concept drawing "would have disappointed reviewers," he adds.