Plans to raze and rebuild the Leona's restaurant in East Village are moving to the City Council for approval. But Ald. Brian Hopkins says he'll work to preserve the building, a former dairy in the East Village landmark district.

The Commission on Chicago Landmarks recommended the city approve demolition at 1938 W. Augusta Blvd. Hopkins told commissioners before the Nov. 5 vote that the community wanted to preserve the structure, a 1920s-style glazed-tile facade around an 1895 two-flat.

"There's grandparents and great-grandparents that'll talk about ordering products from Pure Dairy," Hopkins said. "Many of them do believe the building as it stands today is a legitimate symbol of their success as a community."

Hopkins could block demolition in the City Council, but Commissioner James Houlihan asked Hopkins not to defer the issue. He noted the commission would have to approve any new building. "A 44-story high-rise might not be consistent with the district," Houlihan said.

That's not in store, said Tod Mullen, project manager for MCZ Development. He pledged to stick with the current B2-3 mixed-use zoning, which he said would allow 12 residential units.

"The zoning for this allows for a larger building," Mullen said. "This particular building doesn't have a whole lot of commercial value to us as a one-story, overly large restaurant in this particular location." 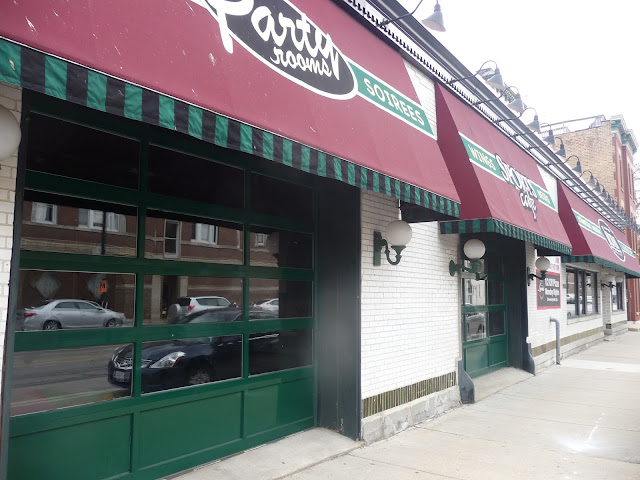 Leona's glazed-brick facade at 1938 W. Augusta Blvd. reflects its past as a local dairy.

MCZ laywer Nick Ftikas said building plans would fit into the district. "We are going to try to fit our building within what we believe the character of the neighborhood remains," Ftikas said.

Commissioners Juan Gabriel Moreno and Ernest Wong voted against the demolition. Moreno asked the developer to "provide some sensitivity to how old and new can merge."

Hopkins said volunteers were still building a case that the building preceded the Great Depression. Elaine Coorens, who researched newspapers and insurance maps, said she believed it's the last example of Chicago's local dairies.

"This building is living history," said Scott Rappe, who framed the East Village Association position against the demolition. "It has been well documented that a dairy operated on the site within the period of significance of the district. ... The alterations which have transformed this residential building into a commercial dairy add to rather than detract from the significance of the whole."

Rappe noted that Ald. Manuel Flores helped EVA head off demolition once before with a 2007 rezoning.

Neal McKnight suggested that apartments could be built behind the facade. He said commercial building in the district need to reflect the period. "We want to have that continuity so our children can understand the past and live in a sustainable future," McKnight said.

Catherine Garypie said the building recalled the days of horse carriages. "When I walk by this building I think about why local dairies existed in Chicago at one point in time. I think about how there were very few cars for much of the time the dairy operated. I think about milk, cheese and butter being produced on the property for their neighborhood, and the pride which the Ukrainian community probably had in the fact that they had their own dairy run by members of their own community." (I made a similar personal case.)

Adam Natenshon, Preservation Chicago vice president, maintained that a rehab could capitalize on the building's retro features. "In the right hands this building would be a gem and a goldmine for a developer that recognizes its attributes," Natenshon said.

Houlihan encouraged the developer to include EVA and Hopkins in its planning. "You're aware that the East Village organization is a very strongly knit and positive contributor to the character of not only this district but that neighborhood, and that they're very important in terms of the neighborhood integrity," he told Ftikas.

"I assume you're also aware that the newly elected alderman who has a great deal of experience in government, would be very interested in reviewing your proposals when you come back with a request that would fit and be consistent with that neighborhood character and this landmark district. It's not just us but it will be that local process that will be very important to your success."