Showing posts from June, 2008
Show all

Jazz from the Charlie Hunter Trio, alternative rock by Polvo and Bishop Allen, dance from Dark Party, experimental music of Daedelus and pop with the 1900s and Ra Ra Riot the 1900s are among performers at the three music stages of Wicker Park Fest, July 26 and 27 from 11:30 a.m. to 10 p.m. Wicker Park Fest is staged on Damen Avenue between North and Schiller. Donation is $5 to benefit the Wicker Park & Bucktown Chamber of Commerce. Information is at wickerparkbucktown.com or (773) 384-2672.
Read more

Greening and your home at July 1 EVA meeting

By Webmaster - June 25, 2008
By John Scheer   Some remodeling products can save you big bucks in the first year of installation by reducing your energy consumption or providing you with a method to monitor what personal behaviors are using the most energy. Others are healthy alternatives for products that are part of your everyday life. Both types of "green" commodities will be explained July 1 in the general membership meeting of the East Village Association. Giving details is guest Theresa Minarik-Okuley, the marketing manager for Greenmaker Supply , 2500 N. Pulaski Rd. Greenmaker opened for business in September 2005 and was founded by Ori J. Sivan and Joe Silver. East Village residents are perpetually updating or repairing something in their homes. Minarik-Okuley will share selected items from the vast inventory of green products. Please join her at 7 p.m. at the Happy Village Tavern, 1059 N. Wolcott, to learn more about options to improve your family’s home, and continue to support green
Read more

President’s Message by John Scheer Longtime East Village residents have a wealth of knowledge and history about the neighborhood that has never been captured. These pioneers have added their own characteristics to the current culture of the East Village. This month’s message is a snapshot of one family that moved to the East Village, stayed through its evolution and became part of its fabric. This is a story about Louie Topacio, son of Luis Topacio. Luis moved to East Village in 1971. He worked as a nurse at two jobs, St. Elizabeth Hospital and Cook County Hospital, to support his wife and family. Many of the nine sons and four daughters were adults but the family was still a top priority for the Topacios. Soon after arriving in East Village, Luis bought a modest two-flat on the same block where he was renting. Ten years later, Louie (one of the sons) and his wife Linda relocated to East Village and moved into the two flat with Luis. Jane Byrne was mayor in the early 1980s when they m
Read more 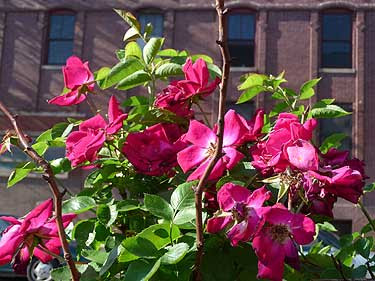 By Marjorie Isaacson   The 20th year of cultivation is underway at the Frankie Machine Community Garden. The East Village Association established this community garden at 1800 W. Haddon (one block south of Division at Wood) in 1988. Today, there are 27 individual plots for neighborhood residents who do not have their own garden spaces at home. Gardeners share raspberry bushes and a mature peach tree in the parkway. Frankie Machine Garden is one of 57 sites owned by NeighborSpace , a Chicago community land trust. Frankie Machine is the title character in Nelson Algren’s novel The Man with the Golden Arm . His last name was Majcinek, and he was called Automatic Majcinek for his expertise in dealing cards. Eventually he became Frankie Machine everywhere from the polls to the police blotter. Frankie’s "golden arm" was an extension of his steady wrist, both valuable tools for a gambler and card hustler. Over the years, as his addiction to heroin worsened, a small fortune was
Read more

A day after East Village's new police commander heard complaints about speeding cars on North Winchester, a patrol car was parked at Winchester and Thomas. The next day, Judith Martin was checking out the alley escape route for a nearby home burglary that had been discussed. Martin told East Village Association members on June 3 that she shared their concern about side streets being used as rush-hour speedways. "If you draw your attention to stop signs, nobody stops!" Martin said. Drivers will "just coast through" a stop sign, even one in front of the 13th District's Wood Street squad room. "People think it's like a caution sign." Martin said the death of 4-year-old Maya Hirsch in a 2006 accident rallied her Lincoln Park neighbors to a Stop for Maya campaign to promote driving caution. She suggested Winchester residents petition for speed bumps and said patrol officers had been assigned to traffic hotspots. "Crimes of opportunity"
Read more

Commander Judith Martin of the Chicago Police’s 13th District is the special guest of East Village Association at its meeting Tuesday, June 3 at the Happy Village tavern, 1059 N. Wolcott. Martin is the department’s former domestic violence coordinator, and volunteered at a battered women's shelter before joining the force. "I always tell everybody, 'Call the police.' But I know it's not that simple," Martin told the Chicago Reporter in 2002. “If I was being abused, I probably wouldn't call the police, either. I guess it's because I'm Irish and Russian, and we grew up learning that you keep that to yourself. … You don't air your dirty laundry."   Martin’s 26 years in uniform also included Foster Avenue district patrol duty, the Internal Affairs Division and the citywide Organized Crime unit. Police Superintendant Jody Weis replaced 21 of Chicago’s 25 district police commanders in March, a month after the former FBI agent took over as Chica
Read more
More posts