Showing posts from September, 2008
Show all

By Stephen Rynkiewicz - September 29, 2008
The City of Chicago is holding another landmark workshop Saturday, Oct. 25, this time nearby at Whitney Young High School, 211 S. Laflin in the Jackson Boulevard landmark district. The sessions are informative and a good opportunity for face-time with the landmarks staff. RSVPs are required at 312-744-3200. —Marjorie Isaacson
Read more 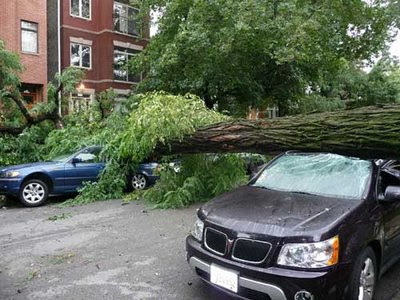 A tree felled by lightning blocks North Winchester, crushing cars on either side, following storms on Aug 5, 2008. (Photo by Stephen Rynkiewicz) President’s Message by John Scheer  Have you have heard the monthly siren test at 10:30 on the first Tuesday of every month? What do you do when you hear those sirens and it’s not a test? Last month when the tornado came through our neighborhood was the first time I can remember ever hearing the warning sirens while living in Chicago. And it was a good reason the warning was sounded. Between the news flashes that interrupted TV programming to the sudden power outage, we gathered up the dogs and a flashlight and headed to the basement. Again, that was the first time I can remember heading to shelter while living in Chicago. We regularly see major weather damage around the Chicago suburbs, but I remember only small isolated issues from violent weather in the core of the city. This time, the tornado warnings correctly predicted serious, widesprea
Read more

Button up home for winter

By Webmaster - September 22, 2008
By Marjorie Isaacson  The imminent arrival of cold weather and increases in heating-fuel prices mean that making your home more energy-efficient is more important than ever. Surprisingly, much of the energy used to heat and cool houses is wasted. The average home can easily save 30% on their energy use. In addition to saving money, using energy efficiently will make your home more comfortable and reduce your impact on the environment. And while some improvements like a new furnace require investments, you can make many improvements at no or little cost: Find and seal holes. Each individual opening may seem tiny, but together they add up and result in significant exposure to the elements. Caulk leaky windows, add weatherstripping to doors, and insulate any openings, such as around air conditioner window units. Don’t heat unused space. Close doors to rooms you’re not using. Set your water heater to 120 degrees. Cover it with an insulating blanket. Consider covering your wind
Read more

By Webmaster - September 22, 2008
By Greg Nagel  I consider myself moderate in balancing historic preservation with new development. There are times that I’m disappointed by the tearing down of great properties and other times I roll my eyes when people tell me that a particular building is a gem that needs to be saved. With that being said, one neighborhood feature is truly spectacular &@151; the decorative ledges to flat roofs known as cornices. The owners of these buildings really should preserve them. Over and above the fact that many of them are irreplaceable, it makes good economic sense to do so. On a regular 22-foot-wide building, a new but bland and boring replacement cornice will cost you somewhere in the vicinity of $6,000 to $15,000. To re-create something spectacular will be two to three times that amount. However, to sand rust, patch holes and paint an existing cornice will cost roughly $600 to $1,200 every 3 years. Cornices by their nature are exposed to the elements and must be maintain
Read more

By Webmaster - September 22, 2008
General Meeting minutes for September 2, 2008 Membership Meeting Submitted by Joe Hunnewinkel Introduction and welcome to Guest Speaker Alderman Manny Flores. 1. Alderman Flores spoke about the new LaSalle School of Language Arts at Division and Wolcott, formerly Anderson Academy. The school will focus on Chinese and Spanish, and membership would be 50% local students. An event is in the works to welcome the school and establish a relationship with the community. 2. A new playlot is in the works for Commercial Park. 3. The Alderman stated that the West Town Library will hopefully be relocated to the Goldblatt's Building in the near future. He requested that members send letters to Commissioner Mary Dempsey stressing the need for a permanent solution. 4. The Alderman spoke successes of the Blue Cart Recycling program, and encouraged members to educate neighbors on the correct method of using them. 5. Alderman Flores talked about the successes of the Milwaukee Avenue Landmar
Read more

By Stephen Rynkiewicz   With much of Milwaukee Avenue's Ashland-Damen stretch now a city landmark district, Ald. Manuel Flores (1st Ward) now suggests that nearby properties be considered for a Polish Triangle "historic district." Flores told East Village Association members Sept. 2 that city designation of the Ashland-Milwaukee-Division intersection could include buildings to the north and east of the Milwaukee Avenue district created in April. The Chopin Theatre , 1543 W. Division, and other structures would represent the "Polish downtown" of the late 19th century, he said. This summer, Flores consented to demolition of a Commonwealth Edison substation nearby, at 1510 W. Division. In a Chicago Journal commentary, Flores wrote that polychlorinated-biphenyl contamination on the site made preservation impractical. The city's 1995 Chicago Historic Resources Survey rated the power station in the "orange" second tier of significant properties. In Apri
Read more
More posts