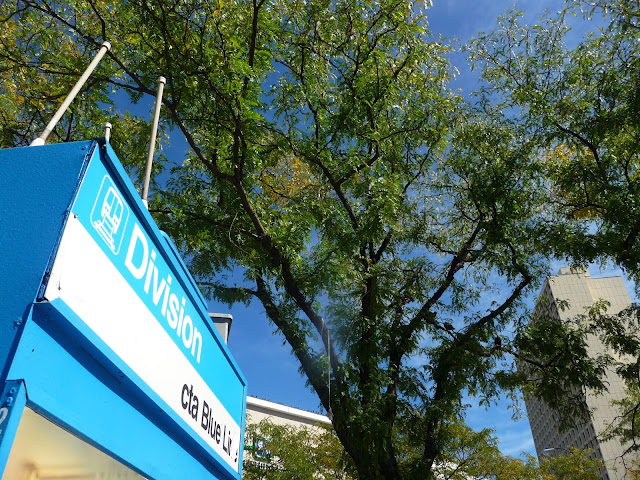 "The project will still be awarded to a design-build team," Rappe tells members of the Polish Triangle Coalition, "but there appears to be time to influence the process, and a willingness on the part of the CTA to make sure this happens."

The East Village Association, Wicker Park Committee, Near North Montessori and other community representatives formed the coalition to support public-space improvement and maintenance at the Division-Milwaukee-Ashland intersection. The group produces summer performances at the Polish Triangle.

A contractor will plan and execute updates. The Grand, Chicago and Division stations would get new entrances with granite stairs, glazed wall tiles and new lighting.

But city representatives estimated that the downtown-style design would cost twice as much as recent improvements at neighborhood stations. And it hedged on whether the timeline would support custom plans. With work still to be awarded, the coalition is formally requesting a role in designing the station.

The group formed in 2011 as a Friends of the Parks affiliate. It recently incorporated and is seeking recognition as a nonprofit charity.

Division is one of seven Blue Line stations promised "extensive" renovations in the CTA's $492 million Your New Blue plan, a 13-station modernization that began in 2014. The city secured a $120 million federal loan a year ago to start improvements.

Renovations are estimated at $33 million for the Grand, Chicago and Division stations. The CTA plans to make water management improvements and ceiling repairs, replace the original 1951 escalators and clad the platform and staircases in granite. Mezzanine improvements would include an epoxy finish for the concrete floor, new plaster ceilings, high-efficiency lighting and new steel exit gates.

Ridership at the Art Deco station at Division is comparable to the Rosemont, Jefferson Park and Logan Square stops. With the prospect that transit-oriented development will bring more riders, the coalition argues the Polish Triangle plaza and its subway entry should be a clean and welcoming destination.

The Division node was built for the Dearborn Subway, a downtown tunnel excavated during the New Deal to replace elevated tracks. World War II delayed the station's buildout. A concession stand dates from 2005.