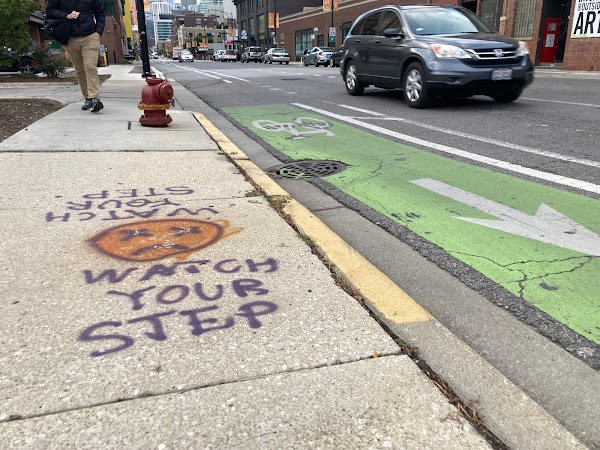 Do you have an idea for an infrastructure improvement in the 1st Ward? Some of your neighbors do, and they are trying to get them funded in next year’s city budget.

Here are some of the proposals from the 1st Ward Participatory Budgeting process:

There are 76 proposals registered on the Participatory Budgeting website. The time for submitting ideas has been extended, and additional ideas can be added until Oct. 5.

One of the chosen projects in last year’s participatory budget was to install a protected bike lane on a mile of North Wood Street, which would include making Wood Street a one-way street. There was some consternation when this was discussed at the February EVA meeting. Some people were upset at the proposal, but board members thought the process itself had too little participation.

Residents opposing the changes on Wood Street proposal have been circulating petitions and distributing flyers. Regarding the process, the 135 people voting online and in person was a small percentage of the people in the ward (>50,000). Residents wondered whether it was appropriate for such a small number of people to make decisions that affected the entire ward and the neighboring 2nd Ward.

The participatory budget process in the 1st Ward is underway now. Assistance is provided by the Participatory Budget Project and the University of Illinois’ Great Cities Institute. There is a well-developed website that is easy to use. If you have questions about the process, additional information is at pbchicago.org.

At the 1st Ward site, you can also review the projects that have been proposed. I especially like this feature because you can make comments about anything you think should be considered in the evaluation of those projects, whether you agree they are a good idea or not.

Self-selected “community representatives” develop the projects that will be offered for a vote via Zoom meetings. I question how people who aren’t digitally connected can participate. Like many things today, this process is designed to happen online.

However, if you don’t use computers, the 1st Ward chief of staff, Nick Zettel, wants you to get in touch. I’ve been following this process, and the meetings have been friendly and well-organized. Most importantly, you should make sure you participate when the voting happens.

On balance, a budget success

Participatory budgeting has received a lot of attention worldwide because it is such an innovative way to include people in the often opaque budgeting process. There is no shortage of academic articles on the subject, and as more communities use the process, improvements have been incorporated. It has largely been considered a success.

In Chicago, in some cases, the results have revealed a gap between what the alderman thinks is important and what the residents want. For example, neighborhood residents have rejected much-needed infrastructure improvements in favor of projects that beautify their ward. Participants also complain that the funding is limited to infrastructure projects, when they want to spend their money on what they believe are the most significant issues, crime and safety.

There is also criticism of the low participation. However, democracy is for those who show up. Participatory budgeting may be a small step toward making budgets more equitable, but it’s a beginning.