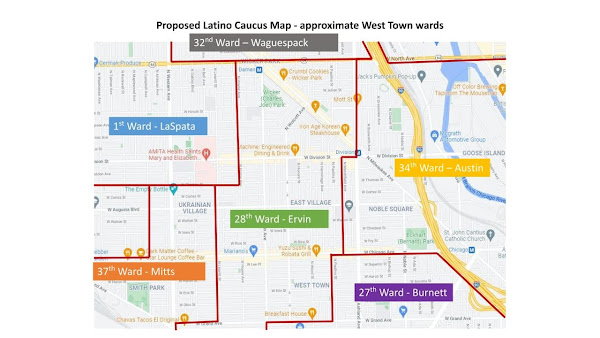 Neighborhood communities must stay unified in order to serve the constituents, ensure public safety, and address common needs. We, the community called West Town, are comprised of closely knit neighborhoods represented by the undersigned neighborhood associations. We insist the alderpeople and their respective caucuses create a ward map for the City of Chicago that unifies our connected neighborhoods into as few wards as possible rather than excessively dividing our community.

Our neighborhood associations represent contiguous communities including but not limited to: Wicker Park, Ukrainian Village, East Village, Noble Square, and West Town (generally defined as the neighborhoods between Grand Avenue, Bloomingdale Avenue, Western Avenue, and the expressway). We often work together to address community issues that span between neighborhoods to ensure that the West Town community is capable of advocating for its interests and facing community challenges.

This division occurs at a critical time for the West Town community. It will make it harder, if not impossible, for us to advocate for ourselves and work in unison with our alderpeople to face challenges and create a better West Town. For example, in 2021 the West Town community is seeing a significant spike in violent crime. In the City of Chicago, the community has experienced the 2nd highest number of vehicular hijackings this year. This is double the number of carjackings West Town experienced last year and a trend that continues daily. Concerned citizens and neighborhood organizations are actively organizing to bring public safety concerns to the forefront and trying to work with the local alderpeople to find solutions. However, even with three alderpeople representing our area it has been a challenge. Further dividing the West Town community into six wards will only hinder the residents and organizations seeking to improve our community.

Our goal is to keep the West Town community unified and in as few wards as possible. We believe the City of Chicago and its citizens are best served by continuing to support communities, and we hope you will join us in advocating for a ward map that respects neighborhood boundaries and supports the established West Town community.

Please watch for your invite to our community meeting on November 18th.