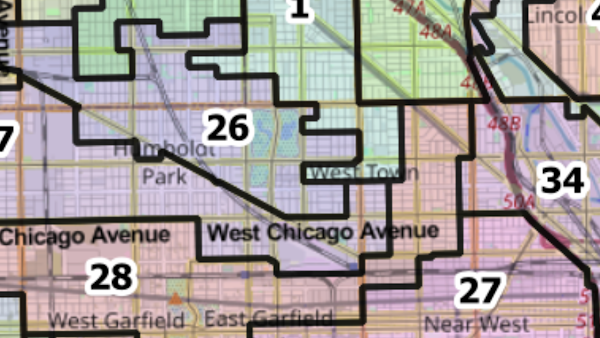 Who will represent East Village for the next decade? Chicago aldermen will negoatiate their ward boundaries in November. Their first proposal splits the neighborhood between two wards spanning the city: one stretching west to Central Avenue and another east a mile short of Lake Michigan.

The meeting starts at 7pm in The Mitz event space, the former Lincoln Public Baths building at 1019 N. Wolcott Ave. NOTE: Masks are required for all attendees. Per Executive Order 2021-10, Private Property may still require all persons to wear face masks regardless of vaccination status.

The City Council's Latino Caucus made the first bid in Chicago's redistricting on Oct. 22. Their proposed map appears to divide East Village along Ashland and Paulina between the West Side's 28th Ward, now represented by Ald. Jason Ervin, and a transplanted 34th Ward now represented by South Side Ald. Carrie Austin, who was indicted July 1 on federal bribery charges. The draft boundaries scatter the larger West Town community among seven wards (1, 26, 27, 28, 32, 34 and 37).

In recent decades, East Village is rended in every remap. Since 2015 the neighborhood has been shared by the 1st, 2nd and 27th wards; the Latino Caucus map pushes the 1st Ward northwest toward Logan Square and the 2nd ward east from Milwaukee Avenue. The previous 2003 map divided East Village among the 1st, 27th and 32nd wards.

The City Council likely will consider more redistricting plans to take effect in the 2023 municipal election. If 41 aldermen cannot approve a single a map by a Dec. 1 deadline, a special election will let Chicago residents choose among maps the aldermen have put forward.

The Chicago Advisory Redistricting Commission, a project led by Change Illinois as a recourse to aldermanic gerrymandering, held hearings to produce a "people's map" with more compact boundaries. Its Oct. 1 final map puts East Village in a single ward. West Town is split among five wards.

Congressional and state legislative districts are also being redrawn for the 2022 midterm elections. Covid-releated census delays forced mapmakers to estimate population shifts, though, and a U.S. District Court challenge sent state lawmakers back to the drawing board in October. Current draft boundaries for the House of Representatives move East Village from Rep. Mike Quigley's Northwest Side 5th Congressional District to Rep. Danny K. Davis' West Side 7th District.