Bird picks up 250 of its scooters every night and redistributes them for the morning commute, general manager Robbie Zettler told EVA members Sept. 9. Yet with 10 companies in Chicago's June-to-October scooter trial, it's hard for any of them to commit more resources to clear scooter clutter. 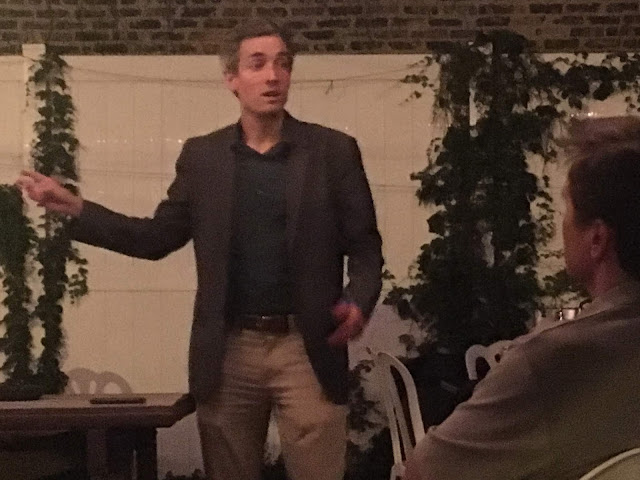 Dean Maragos, attorney for the Windy City convenience store at 1756 W. Chicago Ave., asks for EVA members to consent to a liquor license change that would allow hard liquor sales in its plan of operations. Maragos promised that window signs would be moved to allow clear view of the store and to circulate details before an Oct. 7 vote on proposed restrictions.

State of the 1st Ward

Ald. Daniel La Spata is meeting with community groups for feedback on zoning review, spot zoning and demolitions. Ward nights have started 4-8pm on the 2nd and 4th Thursdays in the ward office at 1958 N. Milwaukee Ave. A participatory process will budget ward "menu money," with town halls starting in October and on public safety in the future.

"We can't do the budget that we did four years ago," La Spata said. "$550 million in new property taxes is not a mistake I want to repeat for the city."

Answering questions, La Spata says he will not try to anticipate changes in the ward map or City Council makeup. In a meeting with Mayor Lori Lightfoot, he said extending sales taxes to corporate and personal services was discussed. A 3% corporate taxes alone would generate an estimated $300 million in new revenue.

Scaffolding eventually will come down at the West Town branch library, La Spata says, with $6 million in exterior renovations due for completion by mid-2020. Also on the alderman's radar are the feasibility of a city-run electrical utility, the contested 168-unit high-rise plan for 1624 W, Division St., CTA Blue Line renovations and state multifamily property tax relief.

Plans for 1115 N. Hermitage Ave. have been scaled back to converting existing commercial state to residential use.