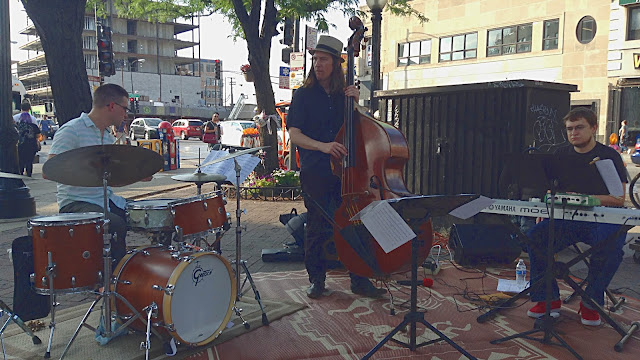 Tuesdays at the Triangle concerts begin June 5 at the Polish Triangle, the intersection of Ashland Street, Division Street and Milwaukee Avenue.

Some events will feature food and beverage choices and Vendors are still being sought for the Polish Triangle Marketplace on event days, as well as sponsors for the performances. The June 5 event is sponsored by Activate! Chicago and Wicker Park Bucktown Special Service Area #33. Sponsors for 2018 include: Adventure Stage Chicago, Ald. Brian Hopkins, ChiME, Chicago Department of Transportation Make Way for People, City of Chicago Year of Creative Youth 2018, Near North Montessori, Our Urban Times and Wintrust Bank - Logan Square.

The Polish Triangle is the gateway to Wicker Park, East Village, Noble Square and Pulaski Park neighborhoods. The Northwest Side intersection sits along one of the Chicago's original Native American trails and was the historic center of Chicago's immigrant Polonia community. The Triangle is a primary destination for CTA Blue Line travel and the center of Chicago's first Transit Oriented Development zone undergoing residential and commercial expansion.

For more information on Tuesdays at the Triangle and the Polish Triangle Coalition, visit polishtrianglecoalition.org.