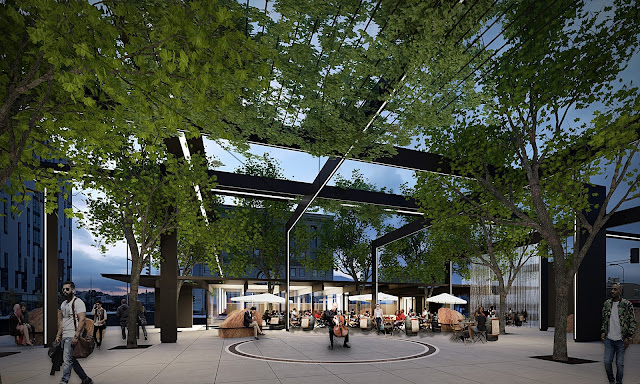 As the CTA plans Division Street subway station repairs, the Polish Triangle Coalition is floating a proposal for long-term improvements at the Ashland-Division-Milwaukee intersection.

"The CTA has told us that 'we can't build this," said coalition board member Drew Bayley, who on March 5 showed EVA members the conceptual drawings presented to the city. Transportation planners consider the improvements "a heavy lift." Nevertheless, the coalition hopes the city will adopt similar design features in capital plans 5 to 12 years away.

First come the repairs. A request for proposals calls simply for building a canopy at the Division Street Blue Line stop. The coalition advocates a more ambitious proof-of-concept design for the street-level station entrance.

Plans have been a decade in the making, since the Wicker Park Bucktown business district commissioned a study with East Village Association participation.

EVA continued its involvement, organizing the neighborhood working group that later was organized as the coalition. Volunteers are in their sixth year of planning Tuesday afterwork performances at the triangle, to begin June 5.

Following the presentation, EVA members voted in officers for the next year: