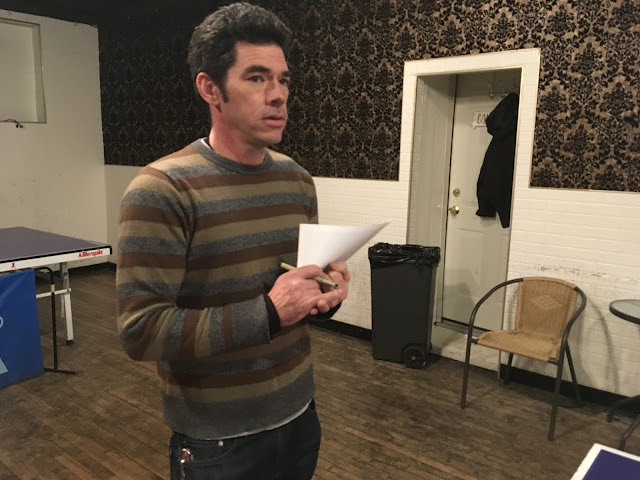 Bar Biscay is a Spanish brasserie restaurant at 1450 W. Chicago Ave. that features cuisine from the northern coast of Spain and western coast of France such as Galicia, Gascony and Brittany. Partner Scott Worsham explained the restaurant's concept and passed out menus. Bar Biscay’s chef is Johnny Anderes, previously of Avec.

Design for the Polish Triangle (Ashland, Milwaukee and Division)
polishtrianglecoalition.org

Drew Bayley, architect with Moss Design Studio, presented and explained renderings for physical improvements to the Polish Triangle. The design was created through a pro bono contribution from Bugaj Architects, whose offices are at 1223 N. Milwaukee Ave. on the Polish Triangle.

Obstacles to the project include cost, identification of agencies with legal control of the Polish Triangle, and assuring beautification of this space as an agency priority.

Bayley estimates that fundraising could begin in as soon as 6 to 12 months. The coalition will be seeking contributions from surrounding developers. The project could be done in phases, starting with the Ashland canopy.

Neal McKnight, EVA board member, explained the nominating process and the nominating committee consisting of Michael VanDam, Dan Johnson and McKnight. McKnight presented the 2018 slate of Michael VanDam, president; Michelle Hayward, VP; Michaelle Gansle, treasurer; and Neal McKnight, secretary. McKnight called for nominations from the floor. There were none, and the proposed slate was elected without objection.

Chicago Police Beat 1221 is having a Meet Your Officers event at 3pm March 9 at Dark Matter Coffee, 2521 W. Chicago Ave. The 12th District will be opening a Strategic Decision Support Center, which allows the 12th District command and officers to use multiple technologies to respond and proactively address crime issues in the 12th District. This program has been successful in other districts.

Staffing appears to have stabilized and possibly increased in the 12th District, and FBI index crimes for February 2018 were down 36% over the previous year. McKnight noted that crime stats can be impacted by weather, but overall the trend was very good.

Columbus Elementary School is having an adult dodgeball tournament fundraiser at 6:30 pm April 6 at the school, 1003 N. Leavitt St. Anyone may register a team at friendsofcolumbus@gmail.com.

Beatnik Restaurant is seeking EVA’s support for a Public Place of Amusement license. Details to come.

A preliminary request to change the zoning at 830 N. Ashland Ave. was requested to accommodate microblading operations. Details to come.