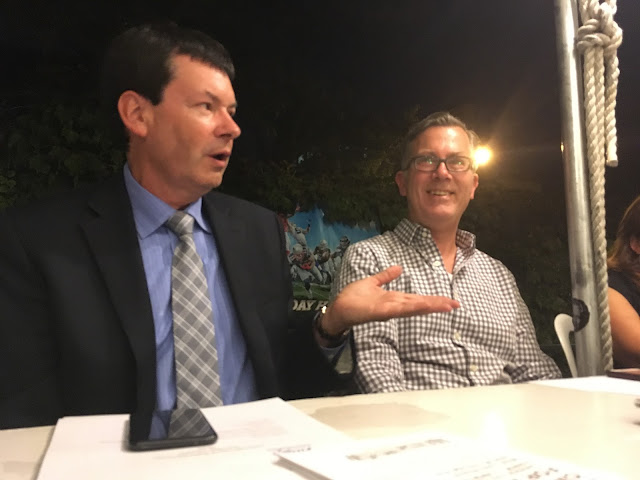 Ald. Hopkins asked EVA to find threatened structures that should be preserved, and gave details on his attempt to shore up the landmark ordinance.

A damaged Logan Square landmark spurred Hopkins to action. The owner proposed that the structure was beyond saving and should be razed. The decay appeared to benefit the landlord; there were even indications of tampering. Yet willful neglect or gross negligence was hard to prove. When the East Village landmark district was organized in 2005, residents noted similar signs of landlord resistance.

Now the alderman proposes that if owners ignore a warning, the city should block demolition of an "unsafe or structurally compromised" property for 20 years. "The point of this is to let them know at the earliest stage of this process that they really have no choice but to monitor their landmark property," Hopkins said.

Hopkins contends that fines in the landmark ordinance, $500 to $1,000 a day, would keep landlords from gaming the system to get demolition permits for protected sites. Still, he admits that the city would be taking its chances that a housing-court judge would levy the fines. "You win some and you lose some," Hopkins said.

Planning chair Brian Foote suggested that the city still would have to demolish unsafe landmarks. He proposed that plans in character with the district be in place before demolition is approved. Hopkins suggested that zoning powers might not save a building, but could influence its replacement. He asked for EVA help in adding threatened structures to the landmark rolls. 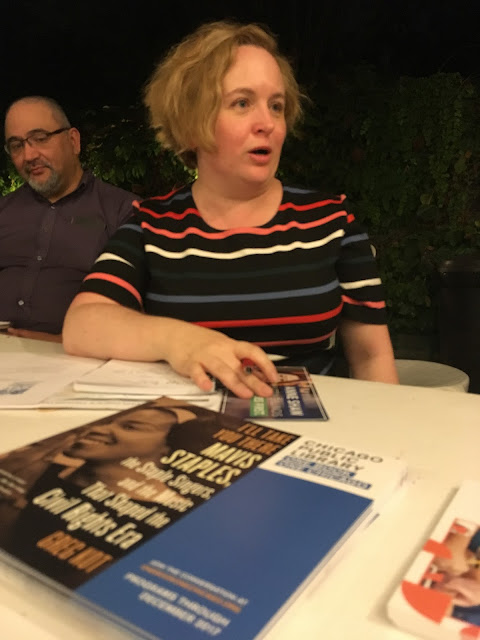 Stephanie Flinchbaugh noted that the Chicago Public Library this year features a local author and subject.

Scaffolding keeps the branch library at 1625 W. Chicago Ave. under wraps. Sick Fisher murals and sidewalk "yarn bombing" are attempts to draw interest to the building, staffer Stephanie Flinchbaugh told members. But the stalled maintenance project is out of the librarians' control.

The library's latest event has tapped a local resource: the Forbidden Root brewery at 1746 W. Chicago Ave. "Books & Brews" on Oct. 26 features adult beverages and discussion of I'll Take You There, Greg Kot's biography of singer Mavis Staples. (The Nov. 30 discussion is The Traitor's Wife by Allison Pataki.) The library also runs a Music for Wellness" course and onsite homework help. Teen nights and a graphic novel book club are on the full events schedule. 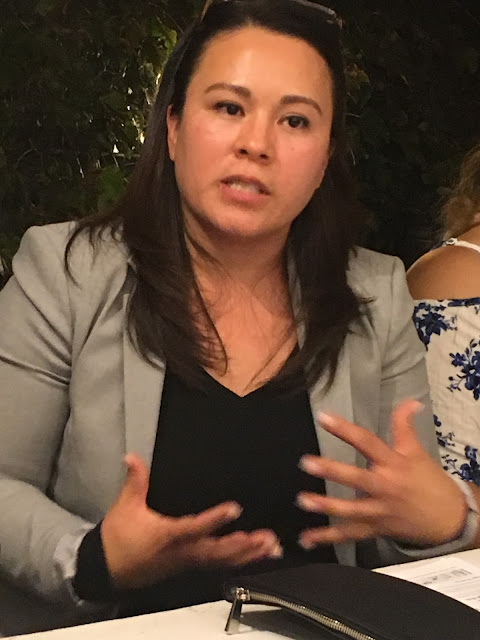 Iris Millan is running for a state legislative seat.
Meet the Candidate

Iris Millan is running for Cynthia Soto's 4th District state house seat in the March 20, 2018, primary. She pledges to advocate on children's and immigrants' issues. Millan is a City Colleges of Chicago community liaison and a Northeastern Illinois University master's degree candidate. Previously she was part of the 1st Ward staff.

The Chicago Department of Transportation is meeting with the Polish Triangle Coalition on plans for the traffic plaza at Ashland and Milwaukee. Bugaj Architects drafted renderings to suggest the scope of work.

The West Town Art Walk is Oct. 6 and 7 along Chicago Avenue.