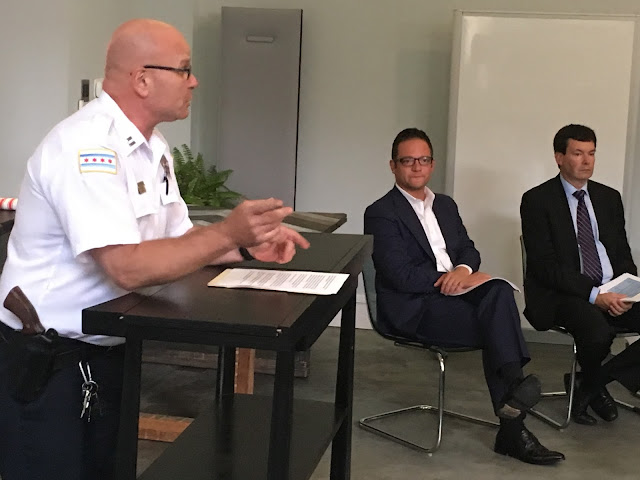 Two aldermen signed a pledge to fight for West Town police staffing at a Aug. 31 East Village Association special meeting. But they pushed back on notions of what they could get done.

The community letter they signed seeks return a police presence at the old 13th District Police Station within a year, and a return to more than 400 officers in the 12th District by the end of 2018.

While signing the letter, Ald. Proco Joe Moreno (1st Ward) argued that it would take the votes of 26 aldermen to reopen the 13th District police station, which closed in 2012.

"I don't sign anything that I'm not going to do. I'm going to fight for that," Moreno said. "But I like wins as well. And I think the win we could have now, with your support, is to increase the number of police offers and the transparency within the department. I'll take that fight to the mayor or to anybody else, any day of the week and twice on Sunday."

A capacity crowd of about 120 people filled the meeting, called on short notice, at the Bath House Cultural Center at 1019 N. Wolcott Ave. 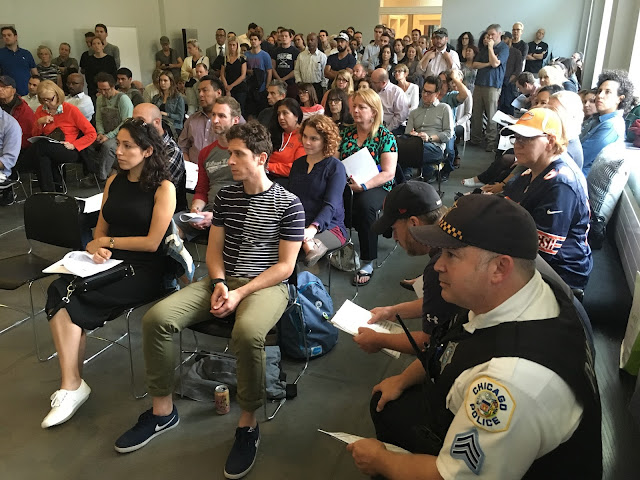 A standing-room crowd of West Town residents attended the forum.

The East Village Association and the Ukrainian Village Neighborhood Association also seek quarterly reports on the number of officers assigned to the district. Meeting organizer Neal McKnight said the district force may have dropped below 300 officers.

The groups also seek more patrols on all watches and beats in the West Town community area and the return foot or mobile patrols to commercial streets and incentives to delay retirements in police ranks.

Ald. Brian Hopkins (2nd Ward) joined in the pledge while noting the challenge it poses. Chicago's police academy is at capacity, he said, and retirements from a high-stress job were inevitable.

"I'm willing to review changes in police protocol," Hopkins said. "I'm willing to go over the collective bargaining agreement, which has expired, and that has a great influence on the way we conduct police business, how we investigate suspicious behavior, whether we can make an investigative stop and what happens after that, which is one of the reasons why police officers don't want to do it anymore."

Kwasinski and Sgt. Chris Schenk asked homeowners to take precautions such as putting street numbers on garages. "They're huge when we're chasing offenders," Kwasinski said, "because when you're running down an alley, it's really reassuring to know I'm at 1019 Wolcott."

Safety tips are included in a handout circulated at the meeting. EVA recorded audio of the event. Video is posted on the members-only Ukrainian Village Neighborhood Watch Facebook page.

Next steps are up for discussion at the next EVA meeting, 7pm Monday at Happy Village, 1059 N. Wolcott Ave.