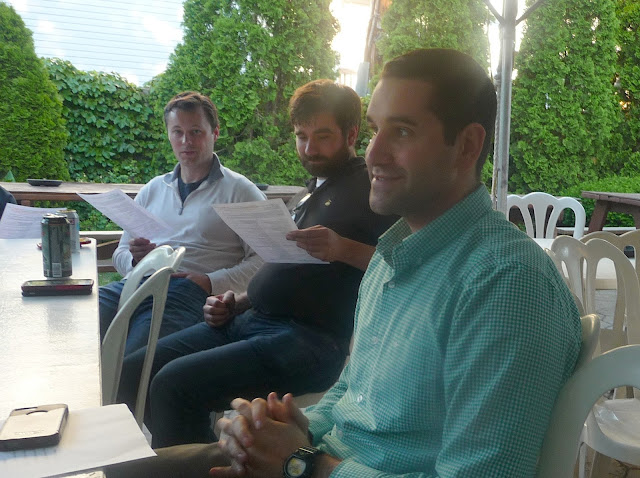 Food for thought was served al fresco from the Happy Village patio Monday. The menu included servings from a local restaurateur, a health-policy organizer and a public-safety volunteer.

The first course for EVA members was an introduction to chef Laurel Khan, owner of Curious, a Chef's Playground. The former chef at fine dining resturant Tru returned to Chicago from Chehalis, Washington, to serve for the past three months at 2020 W. Chicago Ave. The neighborhood's reputation drew Khan to bring her whimisical approach to comfort food here. Curious is an intimate space for 40 diners, open for now Tuesday through Sunday, and BYOB—though Khan says has plans for a creative wine list.

The main dish was served by Ben Gould, community organizing manager for the Illinois Public Health Institute, with details on a proposal to tax sugary drinks.

Some EVA members argued these are stiff taxes, but Gould says they're meant to discourage consumption, which happened after taxes were levied in Berkeley, California, and in Mexico City. A state tax could fund $500 million in obesity treatment under Medicaid and $50 million in community health improvement programs.

Seventy organizations have endorsed the HEAL Act. Gould said the Illinois bill was crowded out of budget negotiations and likely would re-emerge next year.

Next on the menu was an advance look at the National Night Out from CAPS facilitator Annette Cabral. This year's public-safety fair is 5pm Aug. 1 at the 12th District station house, 1412 S. Blue Island Ave. She also reviewed plans for extra police support June 15-18 for the Puerto Rican People's Parade Festival.

Planning committee members Neal McKnight was encouraged that Ald. Brian Hopkins had conferred with Burnett early to rein in the upzoning plan, and chair Brian Foote said a patchwork of spot zoning changes has encouraged developers to overbuild.

In other developments, VanDam said the Foxtrot market is scouting Division Street locations and is seeking Ald. Proco Joe Moreno's backing for a liquor license, since new licenses are limited to restaurants.

Tuesdays at the Triangle concerts have resumed for the summer, according to Stephen Rynkiewicz. Business license roadblocks prompted the Polish Triangle food truck to relocate to Evanston. The festival season continues with West Fest; EVA plans to participate July 7-9 on Chicago Avenue west of Damen.