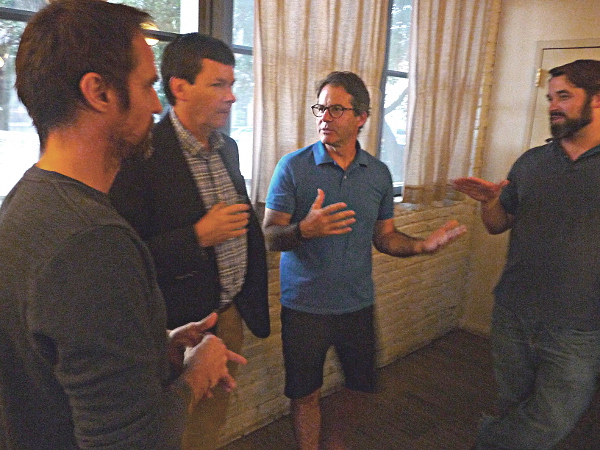 Ald. Brian Hopkins introduced ordinance to lift liquor moratorium to facilitate sale of Happy Village. "I have no problems with this as long as Happy Village stays Happy Village. "Have been largely a responsible bar in the village." "New owner would have to keep what it is intact." Will request to put a plan of operation in writing. Not willing to do so unless the transaction can take place, and this community meeting has been called to do so.

Lucky's Sandwiches manager Jon Donnelly distributed a letter of intent to the group. The process started in February of this year and has encountered hiccups: Signed nondisclosure agreement, was not allowed to enter bar or discuss the potential transition. Did not know there was a need to lift the moratorium.

Partners have been together for 8 years. Lives in 2nd Ward. Wants to know personally from the people who live around Happy Village, are there any concerns. "I understand you don't want a club or anything. This is the kind of place that I want to hang out in."

Stephen: I live about a block away, my experience with EVA is that when there is a transition of a liquor license, that it is typically given to the neighbors for an opinion, this did not seem to be the case. Jon: Because of nondisclosure, I couldn't approach the neighbor. But the first thing would do is walk around and drop information stating plan of intent. If we would apply for a new liquor license, it wouldn't happen, to bring this up to code for a currently license, wouldn't be financially feasible.

Q: The process to transfer a license is to go around and seek 51% approval from 500 ft around the area, is that something you plan on doing? John: Oh yes, it was something I couldn't do at first but now would be willing. This is different since it is a change of officer on the license rather than a new liquor license. UK: So you are willing to do the process? Jon: Of course, whatever legal process.

Q: When did the confidentiality expire? John: Expired through publication.

BobZ: What is your grand plan? Jon: My plan would be to sit down with the employees, not make it a sandwich shop, same establishment with new owners. "We are not ego driven owners" we want it to be successful.

Q: You have sent something out? Jon: Not for this place, not yet. UK2: I live within 200 ft from HV, on Friday and Saturdays it is tough. Trolleys idle outside. Beer garden outside. I would ask that things seem loose with smoking ordinance. Jon: My current bar in Wrigley, I've seen the neighborhood change, we have meetings with CPD every two weeks.

Neal: I think some of the questions being asked about signatures, is whether or not lifting the moratorium, do you need to lift the moratorium? Can you do it another way? Jon: Was not aware of the moratorium when we first started, are learning more with his attorney. Neal: Would you be willing to attach a POA to the licenses? Jon: Am limited on what can do with regards to outside noise. I'd be willing to put it in writing but I have not heard from the sellers in 8 weeks so I am not sure there will be sale.

Q: I've lived by HV for 13 years and knew that if there was going to be a transfer as long as the transfer was within the law. I am asking for a vote. John: I understand your concerns, it is a tavern. Beer garden has operational hours. Everything would be operated within the standard tavern operation laws. I'm not going to tell you want you want to hear to get the deal done, then break my promise. I've worked with 3 different aldermans, can get recommendations, I do feel as an operator, I am someone you want as an operator in your area.

Alisa: In writing this story, I would need to hear what the seller says, where is Cherlyn in this sale? Jon: I let those involved in that side that I would be here. Hopkins: I have had 2 meetings with Cherlyn, 1) That she was ready to sell, and that she did want to have it confidential. 2) Brought her liquor attorney who is well respected, insisted on a POA if there is a lift to the liquor moratorium, guaranteeing that HV will remain what it is for time to come. Because of this, this is the chance to help change.

Kirk Anderson: Describe your demographic of what you want in HV. Jon: When you open a space, you let the neighborhood dictate the space. I feel HV has already been dictated.

Q: When the moratorium lifted, when does it go back? Hopkins: 1 year.

Tom: What patrons are brought in by trolleys and will you be willing to limit them? Jon: Depends on the what the trolley brings.

Q: What kind of assurance can you give us that you are in for the long haul? Jon: All I can give you is my word, the main driver is the real estate. Owning the building is my insurance.

Q: What is the process of attaching a POA? Dan: Coming together from members of the community and signatures get signed and it becomes a legally binding document to the license. Jon: Hoping to meet with the sellers and having POA this week.

Brian: Is the process to lift the moratorium then develop the POA? Hopkins: I had assumed the seller had already approached John, but the plan now would be to draft a POA and post it to the group. If the POA is approved by group, I will take the moratorium ordinance, which is tabled, will be reinstated? Brian: Will the moratorium be placed back in within a year? Hopkins: Yes, but let's discuss at a later time after, this is not part of this decision making process. It doesn't open the door to new liquor licenses. I've generally supported the moratorium in the 2nd Ward.

Neal: There is no impact on not putting the zone back down in a year because there is not a C zone in the area. Hopkins: Willing to develop the POA and provide it to the group.

Alisa: Will the EVA be putting the POA up the EVA for a vote? Dan: Yes, once the POA is developed, discussed with the EVA, when it does go through then it will be brought up to the EVA.

Stephen: Violent crime has been increasing, people have been showing up to CAPS beat meetings. Keeping It Real meeting involved people from a halfway house stating that gangs are easy to get into and tough to get out of. CAPS meetings happen every other month in beats at Northwestern Settlement and St. Helen's.

Brian: Club Foot building owner is willing to put residential on first floor but wanting a zoning change. Board will discuss and possibly present to association in October.

Mike: Working hard to get closing date on the 28th, push ack from seller. City and community have been supportive; up to seller to get this finished.