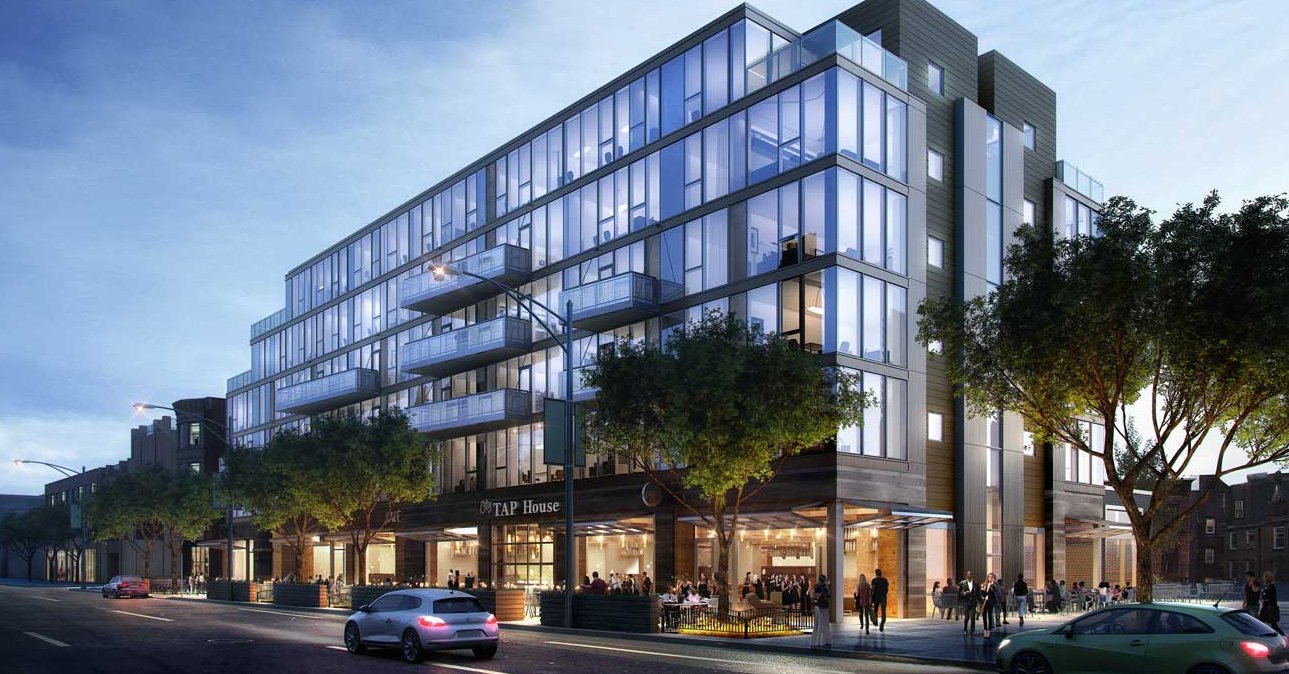 East Village Association board minutes for March 14, 2016, by Daniel Navarro

Peter Gariepy and KK Goh will work on a transition for the treasury. EVA has just over 100 active, paying members.

Local artists are invited to give presentations at general meetings. Dollop Bake Shop, 1000 N. Damen Ave., will be scheduled for a future meeting.

Chicago's liquor commissioners is reviewing a 4am license application at 1935 W. Chicago Ave. A requested copy of the consent petition and voter list was redacted.

The building at 1936 W. Augusta Blvd is in the East Village landmark district. Ald. Brian Hopkins backs its preservation but signals that the city may allow demolition. Hopkins and the city landmark commission must approve any new design. Brian Foote suggests that new construction may not necessarily follow guidelines for reflecting neighborhood character.

The Wicker Park Committee wants EVA to support the 11-story tower and townhouses at 1650-54 W. Division St. Board members want developer Centrum Properties to present plans and the Planning, Preservation & Development committee to make recommendations for a membership vote.

EVA would seek details on how the developer will commit to and follow through on transit-oriented features. Moreno and the Chicago Department of Transportation should agree to public improvements, with contributing dollars. A traffic analysis would suggest what improvements are needed. The developer's traffic report is limited the Paulina Street garage.

The presentation should suggest how to solve traffic problems with not only the parking garage but also Division Street and Ashland Avenue traffic problems. Alternative Schools Network, 1122 W. Milwaukee Ave., may be in advance negotiations and want to resolve to pickup and dropoff.

Moreno has approved lifting the longstanding tavern moratorium lifted and passed it to license commission for a full council. The alderman did not seek community input. (Restaurants have always been exempt.)

The convenience store at 1756 W. Chicago has forwarded its draft plan of operation to sell liquor. It would allow beer and wine in a limited space.

This lifts another license moratorium for a minimum of a year. The city would need new legislation to put the license freeze back in place. Licenses extend for two years.

The city could also grant liquor licenses to Walgreens and on other blocks that have had policing issues. Board members wanted more clarity on this process. Generally applicants must have commercial zoning. Walgreens would fit in under business zoning, restricted to a certain percentage of sales.

Moreno has advocated plans of operation as superior to a moratorium. This license could test an enforcement mechanism. For instance, the alderman could require the business to file a statement on sales volume to enforce the percentage of sales requirement. The plan should be at least as restrictive as the one put in place at Garden Gourmet Market, 1130 N. Ashland Ave.

Façade, awning, sign and windows stipulations in a plan of operations would improve the street. Landmark district guidelines include language on a consistent look along the street. Board members will comment on draft plan of operations and draft a model agreement for to discuss with the alderman and the EVA membership.

A meeting with Moreno could introduce the new board and find out why he asked EVA for review of the Mini Market but not the Division Street request.