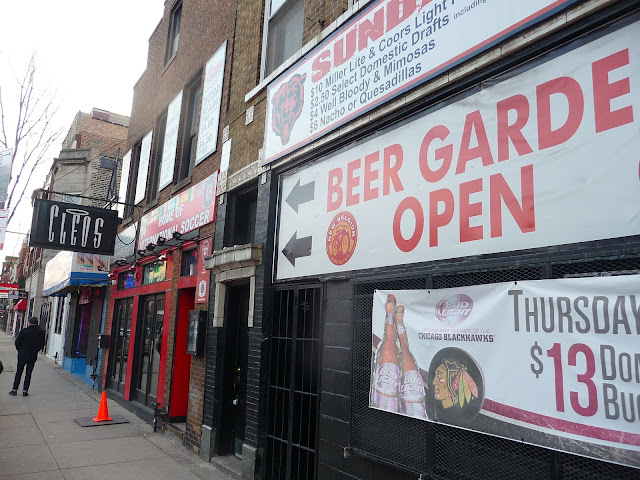 The Cleos street view extends from 1935 W. Chicago Ave. to the building next door.

A late-night license at Cleos pub, 1935 W. Chicago Ave., will be reviewed at the Feb. 1 East Village Association meeting.

Cleos managing partner Scott Floersheimer will make his case, which is likely to echo his Jan. 19 presentation to the Chicago Grand Neighbors Association at Output lounge, 1758 W. Grand.

Kulbida also seeks neighborhood feedback. Residents can contact Sgt. Rebecca Arguelles, who reviews liquor applications, by e-mail or at 312-746-8306. The 1st Ward office can be reached via email or at 773-278-0101. The Department of Business Affairs and Consumer Protection, which issues liquor licenses, is at 312-744.6249.

The late-night license would keep the tavern open till 4am, or 5am Saturday nights. To apply, Cleos submitted signatures of a majority of registered voters listed within 500 feet.

Floersheimer notified neighbors before circulating petitions, and made a case for the license on Cleos' website. He tried to refute objections that surfaced on the Facebook Community Page for Ukrainian Village. He promised to keep the kitchen open till 4, and suggested that most late-night patrons would be workers from nearby restaurants.

He stated that since the bar opened in 1993, the only neighborhood issue he's aware of is patio noise, and that laws protect neighbors from irresponsible operators. Floersheimer noted that Cleos has bought the vacant building next door at 1939 W. Chicago Ave. but said he has no plans for the property. Signs promoting the Cleos patio and drink specials cover the storefront.

The city could act as early as Feb. 13. If denied, Cleos could appeal within 20 days.