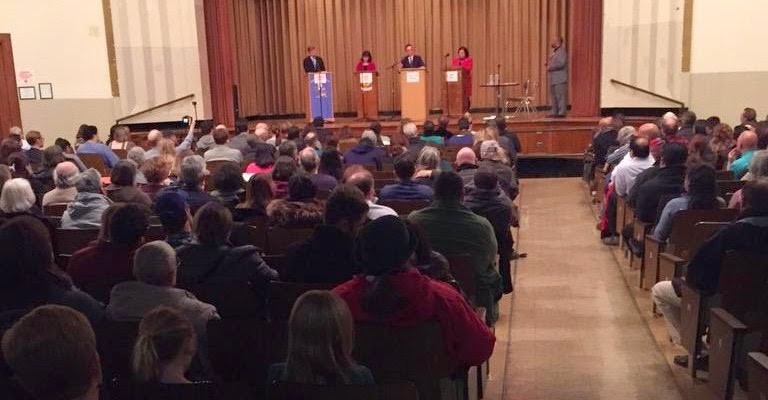 
We received a question about our expenditures on the recent aldermanic debates and why we would spend money to use Wells Community Academy High School's auditorium.

A total of $1,400 was spent on the two debates. Some of these expenditures will be reimbursed by our neighboring community groups and co-sponsors. The amount of reimbursements depends on what their budgets can afford. All funds were paid to Wells Community Academy High School to defray costs for custodial and security staff and building and parking operations.

There were no other debate expenses. The audio equipment and setup was donated by www.zzounds.com at no cost to the organization. We had invited both CAN-TV and DNAinfo to stream the debates but they were unable to dedicate the resources. Portions of the debate were recorded and posted on Facebook and youtube. This video was provided by volunteers.

We conferred with the students, teachers and administration of Wells to coordinate the debates and increase interaction between the community and Wells High School. The debates offered an opportunity to showcase both Wells itself and the students attending Wells. EVA is proud to say that it succeeded on both counts.

Many debate attendees and we would venture to guess some of the candidates had never been inside this beautiful facility. The questions presented by the students were both insightful and provided a unique perspective on issues facing young people in our city. As we posted in social media, the biggest winner from both debates was Wells High School.

As an all-volunteer organization, we can always use more help. We encourage members of our community who are interested in contributing time, resources or money to attend both our general membership meetings as well as our board meetings. Both are open to the public. Please make time to attend. We would love to have you there.