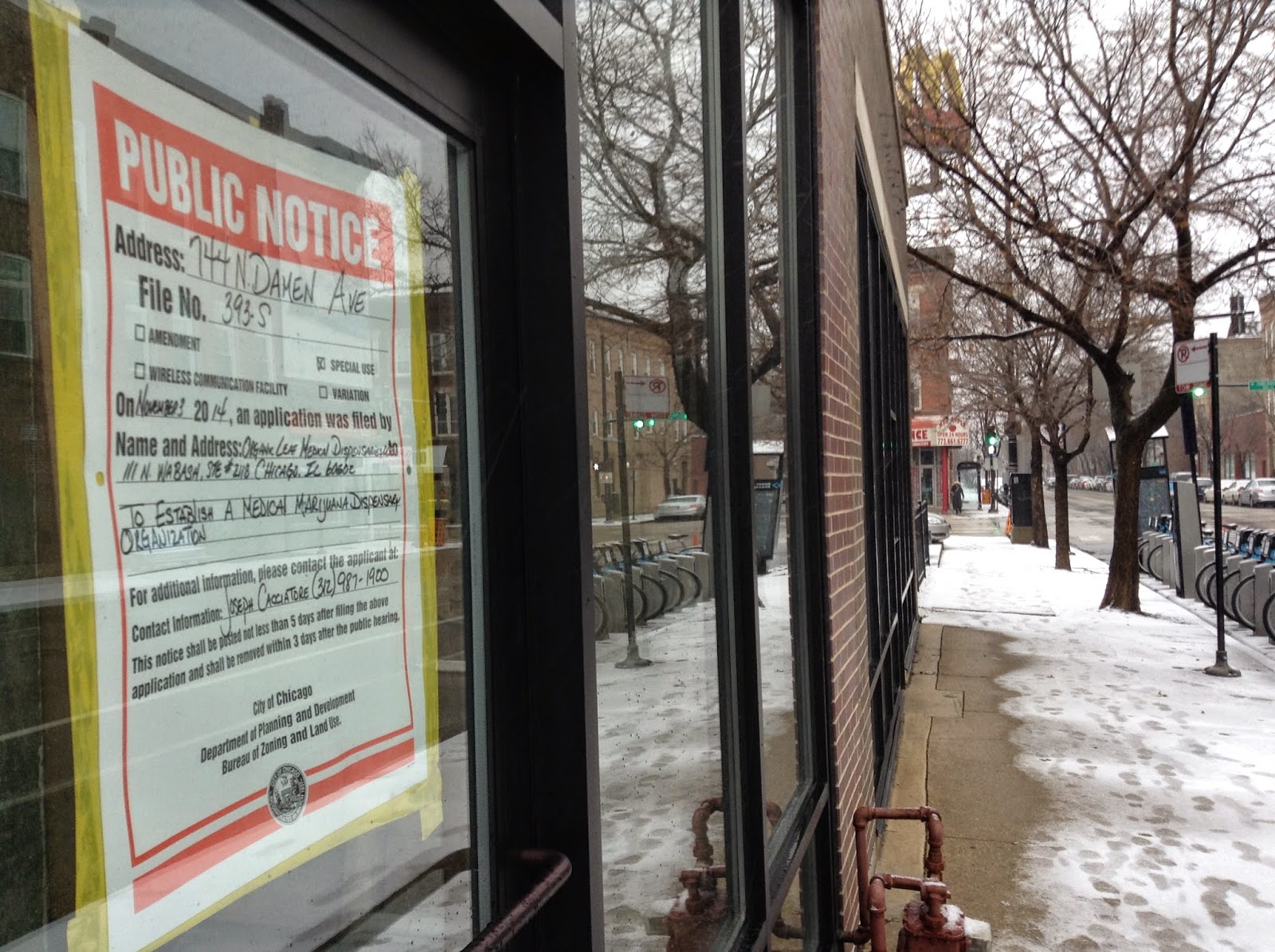 Chicago approved a marijuana dispensary in a retail strip at 744 N. Damen Ave.

Chicago has approved 10 locations for medicinal marijuana sales, including 744 N. Damen Ave. and 1368 N. Milwaukee Ave. But none has received a state license.

The state's "in the process of comprehensively evaluating all applications," according to a Dec. 30 statement from the Medical Cannabis Pilot Program. Only 13 licenses will be granted in Chicago.

Chicago has approved 10 marijuana dispensaries and a grow center.

The city Zoning Board of Appeals approved the Damen storefront Dec. 19. It's in Moreno's ward, but just outside EVA's boundaries (Chicago to Division, Damen to Milwaukee). Members will consider whether to take a position on the Damen site.

At the November EVA meeting, members commented that medicinal marijuana would be a valuable option to treat chronic pain. However, they argued that the stores' large cash transactions and controlled substances would raise robbery risks, and suggested an EVA policy to limit shops to commercial districts.

Marijuana shops are not allowed in residential areas or within 1,000 feet of schools, preschools or day-care centers. Neighbors questioned whether the state restrictions would rule out the Damen address.

The retail building adjoins a McDonald's parking lot. But operator Scott Bergin says 30 cameras and two guards would provide security. He also plans to specialize in products that aren't psychoactive.

Illinois will follow a formula in scoring marijuana stores.

The agency's screening 211 applicants who paid the $5,000 fee for one of Illinois' 60 available licenses. It's scoring their plans for operations, security, record keeping and inventory controls. The top 30% will earn bonus points for such things as employment practices or substance-abuse prevention plans.

Four more dispensaries await city hearings. The zoning board rejected two sites, including 1811 W. North Ave. in Wicker Park. Plans for onsite consultations were a concern, and the operator didn't have a bank lined up. The city also approved a marijuana farm in Hegewisch, which would compete for one of the state's 21 grow-center licenses.

Governor-elect Bruce Rauner has criticized the secrecy as a "rigged process." During the campaign, Rauner maintained licenses should be auctioned to the highest qualified bidder. He hasn't said he'd try to halt the process after he takes office Jan. 12.

Feb. 2, 2014 update: The Rauner administration approved a dispensary at 1368 N. Milwaukee Ave., and held the 1105 W. Fulton Market application for further review. The actions suggest the 744 N. Damen Ave. application has been disqualified, but applicants may appeal.

The Tribune notes the extended review of the Fulton Market application by Perry Mandera, owner of the VIP's Gentleman's Club.