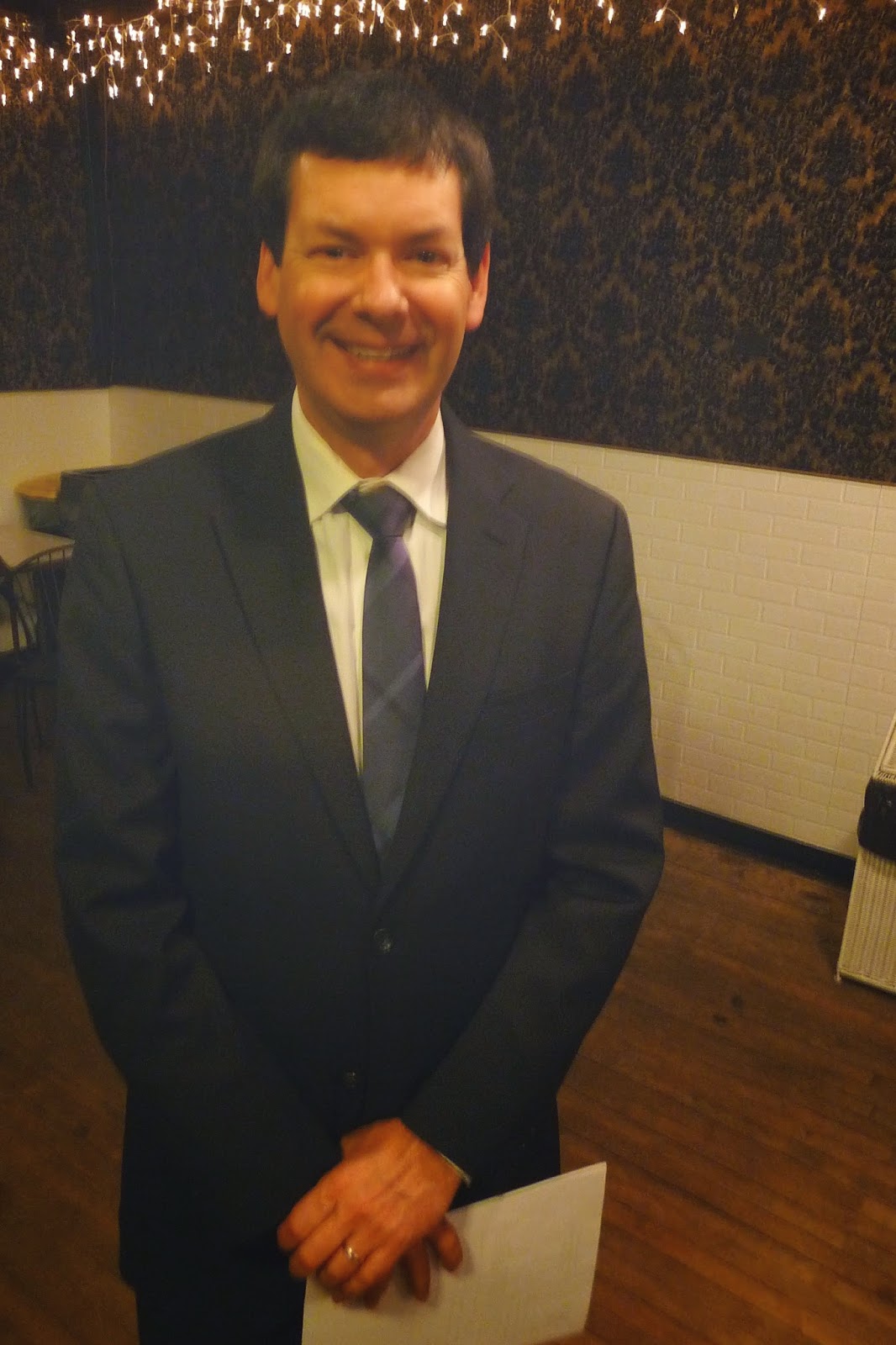 Hopkins spent 16 years working as part of Streeterville neighborhood groups, and had a lot of experience with developers in those groups. Originally from McKinley Park, he worked as chief of staff for Cook County Commissioner John Daley. Campaigning since July, Hopkins said he's concerned about community confusion over the 2nd Ward boundaries.

What is your view of how ward boundaries should be drawn? Federal law requires Cook County to draw a new map based on census data. Usually neutral professionals come up with a map & politicians tinker with it a little. Really, it should only be neutrals, not incumbents. 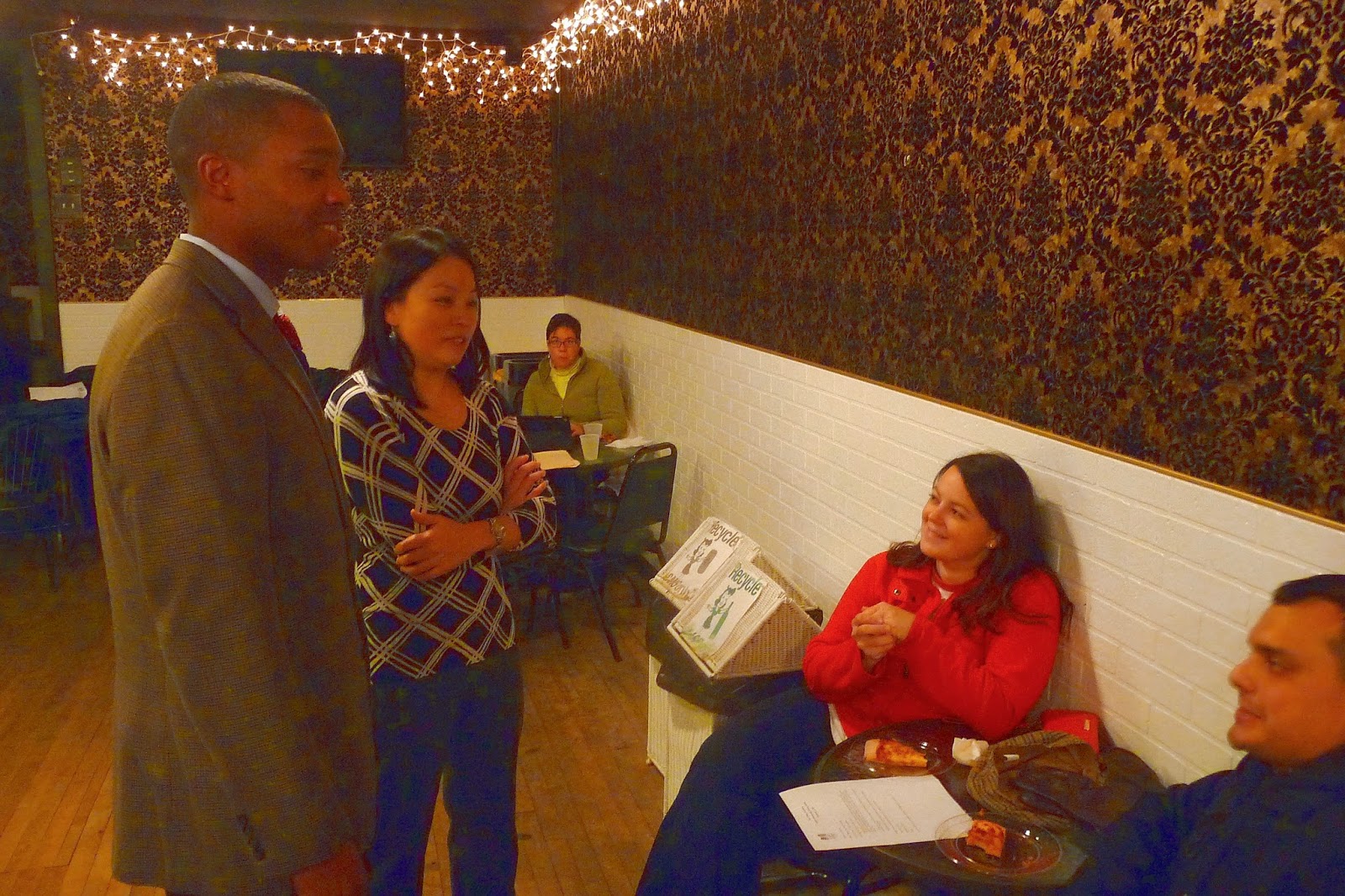 A Marine Corp veteran (Captain, logistics officer), Wilson joined in 2004 and was on active duty in Japan, Iraq and Africa. Then he went to law school at Northwestern and a law review editor. He practiced for a few years at a mid-sized firm in Chicago. Wilson said he has a passion for service and wants to use his leadership skills for the benefit of the city.

"Pension reform is a real example of a lack of leadership. But there are good things happening in the city too: graduation rates are up. ... My goals: smart ward (work with community groups in the City), smart government (transparency - you may not agree with all my decisions, but I will give you information about my decisions), smart Chicago (2nd ward is comprised of parts of 5 wards (42, 3, 27, 32, 1). We should have a neutral body deciding ward boundaries).

"My primary concerns: crime, guns, budget/finance, future of the city. Focusing on guns in particular: illiegal guns on the streets are a huge issue. One problem is that the city buys guns in mass quantities for law enforcement and buys them back when new models are out – the used guns that are “bought back” end up for sale in nearby states & then eventually to city streets. I'm interested in looking seriously at smart gun technology (biometrics or bracelet proximity).

Chicago has a ton of aldermen compared to other cities. Are you seeking a job you want to eliminate? True. There are fewer city politicians per citizen in Los Angeles and New York. Eliminating my job won't be my first act, admittedly.

What are your thoughts on other revenue ideas? For example a “LaSalle Street Tax” on securities contracts would generate several billion dollars for Chicago and ease the pension crisis. We need to look at this - I want to do the research. We need answers for the pension crisis. The city budget is $7 billion. Our deficit is $200 million a year. That deficit will go up in a few years to $500 million a year. Crain's says no on the LaSalle Street Tax, but we need to keep it on the table. The citizens who didn't create the problem should not be paying the price later.

What is your thought process on balancing development vs. lifestyle issues in East Village (development, liquor licenses, liquor moritoria, etc)? The people who vote me in will be primarily residents. Developers are part of the community, sure. I will start by asking community: What do you want the community to look like? I like the fact the community spoke up about whether or not it wanted a Trader Joe's.

How do you plan to manage a ward with such distinct areas - how do you focus on all the different interests? You're right, there are very different areas in the 2nd Ward. I'd like to take it block by block. We all have to have relationships with one another & communicate: homeowners, hipsters, high-rise residents, etc. I plan to show up and be accountable. 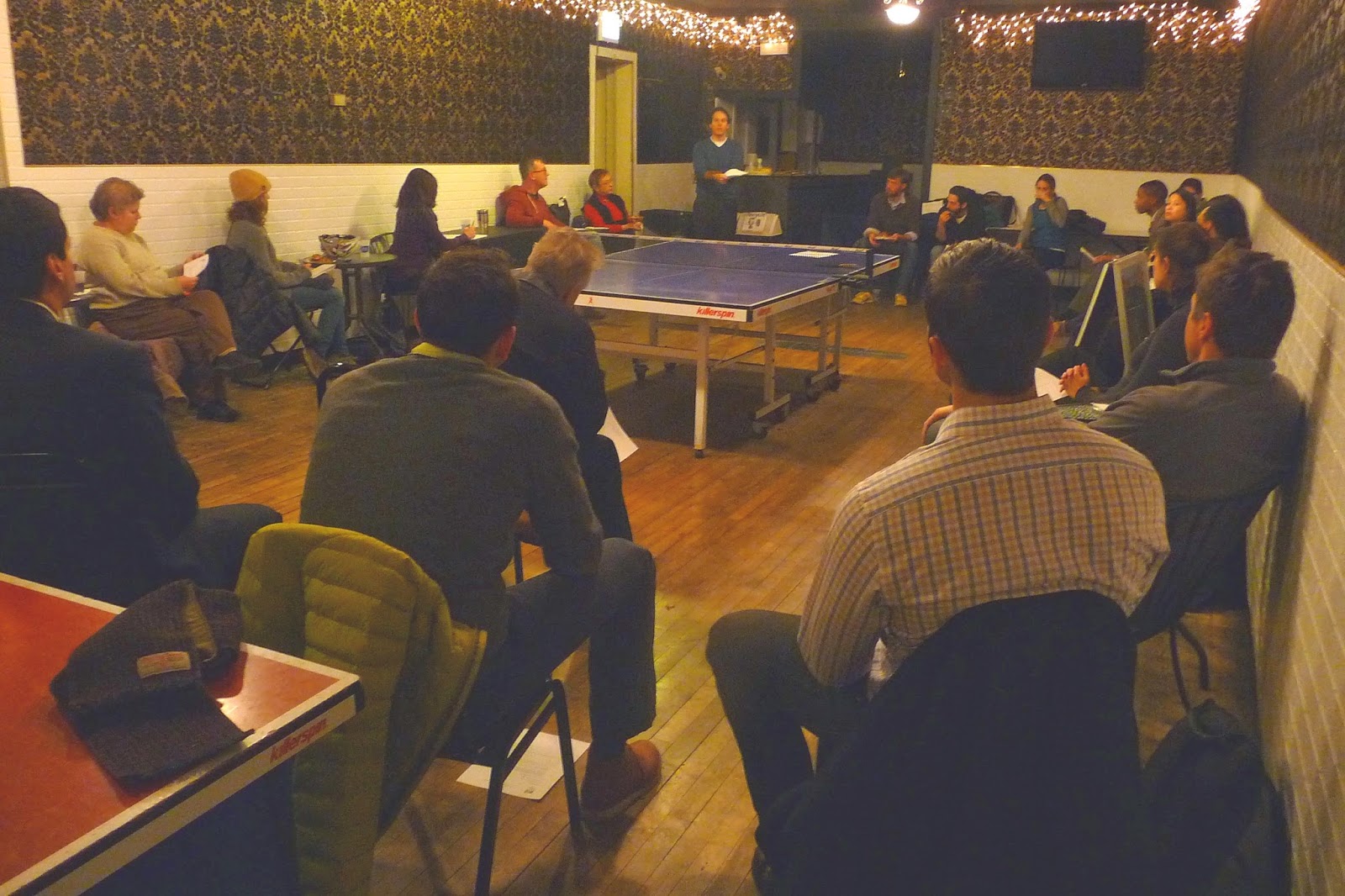 Forbidden Root, 1746 W. Chicago Ave.: EVA leadership initially had concerns about lifting the liquor moratorium. There was pressure to reconsider by parts of the EVA membership & Ald. Proco Joe Moreno. EVA leadership reconsidered. EVA membership then voted to lift the moratorium. Now that Forbidden Root's coming in, let's support the business when it opens in May 2015.

Fifield Cos., 1822-50 W. Chicago Ave. This development passed in the last City Council meeting over EVA's objection. The approved plans have 59 apartment units with ground-floor retail, 52 parking spaces (not quite 1-to-1), using the alley off Wolcott and Wood. The 1st-floor tenant will be a daycare center. The size of the development requires 6 affordable units under city ordinance – the developer will be allowed to build only 4 of these units and put $200,000 into the city affordable housing fund. Construction is expected to begin in the 1st quarter of 2015.

Smithfield/Miller Lumber, 1811-25 W. Division St.: The owner-developer is going back to the original development plan & zoning. There will be 4 affordable units. Ald. Moreno has not been communicating with EVA recently on this development. Sidewalk trees were recently cut down.

Aldermanic debates are scheduled for Wells High School on Jan. 29 (1st Ward) and Feb. 5 (2nd Ward), both at 7pm. Submit questions for candidates to EVA board members or send them to debate@eastvillagechicago.org.