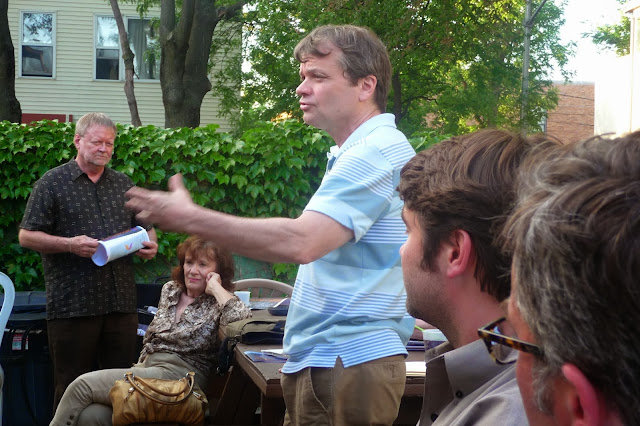 “Crime Scene Chicago: Let Hope Rise 2014”: July and August this summer, partnering with the Chicago Park District, this production will be presented in four parks. On Fridays there will be peace rallies, barbecue and dance competition.

“This is Not a Cure for Cancer” was the spring 2014 production.

Collaboraction has a new board of directors, with 11 people on board. One big reason to support the theater: For every dollar spent in theater, $11 goes to the community. Free tickets were given to EVA members.

EVA is now in the 5th District. East Village was added 16 months ago as a result of Illinois losing population in last census. With 750,000 people, the district covers a large area – Old Town to Hinsdale. Quigley tries to go to EVA meetings once a year; contact his office if you want him to come to your meeting, school, etc., or if you are coming to Washington.

Quigley is on the Appropriations Committee, and the Transportation & Housing Subcommittee. Quigley just returned from Ukraine.

GUN CONTROL: Congress appropriated more money for background checks on gun purchases. Chicago's issue: bad people getting guns. This district has a very low number of prosecutions for gun charges. It's legal to get a gun with no background check a half-hour from East Village, in Indiana.

The General Accounting Office says about 300 guns per year are purchased by persons on a terrorist watch list. Quigley said we need universal background checks. Some states have absolutely no one on the list of dangerously mentally ill people prohibited from getting guns.

FEDERAL FUNDING: Chicago has received funds for the CTA and building bridges. If we're going to spend federal funds, Quigley says, it should be smart spending.

CLIMATE CHANGE. Illinois is a battleground for this issue. Asthma is a huge problem here. Another issue is pollutants into Lake Michigan. It's not just about global warming. We are behind on this issue. This president does not issue a lot of executive orders. Two issues in his recent action are maybe the most important: (1) doubling efficiency of vehicles over time, and {2) power plants.

In May 2014, the EVA board met with developer Smithfield Properties. Trader Joe’s was not present. Basically they presented a 3-story store on Division with garage entry/exit on Honore – a first-floor store and 77 parking spots on the second and third floors.

Changes required include: changing from 1-way to 2-way traffic on Honore, loading zone on Honore, commercial traffic on Augusta Boulevard (Smithfield and its traffic consultant did not realize Augusta was a boulevard) and liquor license changes.

EVA’s directors asked Smithfield & TJ’s to put together a detailed proposal. The board’s not convinced this is the right location for TJ’s and had many questions for Smithfield. The board would also like to hear directly from TJ’s.

Discussion by membership: Development will require that Augusta Boulevard be opened to commercial traffic. Bike lanes on both Augusta and Wood were just repainted. The developer's draft traffic study covered a limited number of intersections, and supporting data was collected in March.

TJ’s has not sent anyone with authority to any community meetings. East Village is a pedestrian/bike community; a member requested that TJ’s build a pedestrian store with no parking.

TJ’s refuses to have a store at this location without alcohol. Smithfield is already interacting with state Sen. William Delgado and Rep. Cynthia Soto. Ald. Proco Joe Moreno does not appear very opposed to the development and has said that he will support what the school wants, but if the school won't take a position he will turn to EVA.

When EVA considers a development, we will not "horsetrade" an approval on new development in exchange for a donation to community entities. (For example, Fifield Cos. wanted to make a $200,000 for Commercial Park contingent on a Chicago Avenue zoning change). EVA does not want to divide the community.

EV has a history of making contributions to the West Town Library. Currently EVA will support the Summer Reading Program (EVA will give funds to buy prizes from the kids). EVA will also seek donations. Please post ideas on EVA website. Library Foundation is about a community group supporting the library & wants to replicate this elsewhere in City. Will be an article in the net EVA newsletter. West Town Library plans to attend the EVA block party & give out library cards. EVA previously partnered with Sun Times, but those donations are currently limited.

EVA's president recently met with presidents of five neighborhood associations. A letter was sent by this group seeking more transparency on street fest planning and budgets. The street fests are money-making events and use the public way.

The West Town Chamber (WTC) has been more forthcoming as a result. The Wicker Park Bucktown Chamber is not being so transparent.

Zoning changes were presented to EVA for 1731 W. Haddon St. and 1947 W. Chicago Ave. A Public Place of Amusement license is required at the Rainbo Club, 1150 N. Damen Ave.; EVA has no objections. The Red Square Russian bath wants to reduce the size of its tree pits at 1914 W. Division St., EVA obects. Tree pits have been illegally reduced. There was also an update on the 1611 W. Division St. apartments.