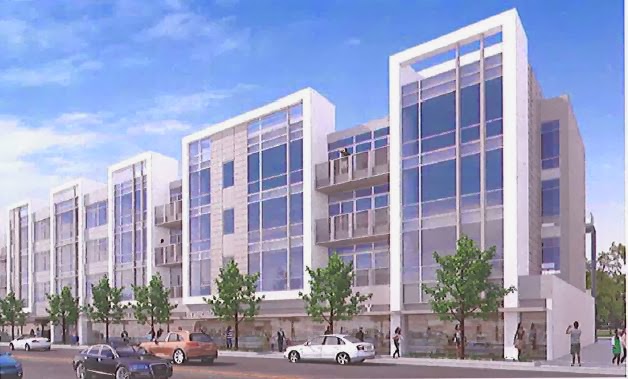 Steven Fifield made a presentation to the board on his current development plan. He's seeking a "no objection letter" for his zoning package, and wants to go before the full EVA membership April 7. Details include the following:

Board members suggested a connection between Chicago Avenue, building and park, such as walkway, arcade, stair or pedestrian overpass. Fifield indicates Chicago Department of Transportation wants no interference with alley traffic. Fifield also sees practical and liability issues. Fifeld is open to a possible 9-foot walkway on east end of building, but would want lockable gate.

Regarding the number of apartments, Greg Nagel indicated that EVA does not necessarily favor high-density development. McKnight notes that EVA likes to think creatively, suggested thinking creatively about density. A suggestion was made that Fifeld contractor do $200,000 worth of work on Commercial Park rather than pay impact fees.

The board asked Fifield to think creatively with the architect and discuss alterations in the next week or so. The board will approach CDOT regarding alley changes.

Rather than lift the liquor moratorium in place, Forbidden Root is pursuing a change in city ordinance that would allow package and carryout sales of their beer as incidental to production onsite. The ordinance has already been introduced to the City Council and put into committee.

Neal McKnight wants to work on developing a direct relationship with businesses and possibly with SSA. McKnight would like to focus on recruiting “institutional members.”

Nearby neighborhood groups are asking EVA to take a side on the Ashland BRT. The board will bring this issue to a vote April 7: "Based on information EVA now has, is EVA for or against the Ashland BRT?"

McNKnight says the Center for Neighborhood Technology is seeking a tax to fund infrastructure, including BRT.

Alcazar-Anselmo is working on working on a draft demolition permit ordinance for consideration.

The next general membership meeting will be at 7pm Monday, April 7 at the Happy Village, 1059 N. Wolcott Ave.