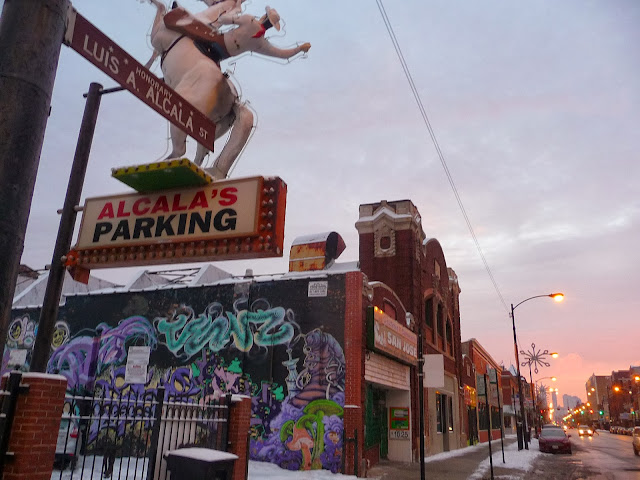 A new brewery and taproom is interested in moving into the former Hub Theater space at 1746 W. Chicago Ave. They will need the liquor moratorium lifted in order to sell packaged goods, and they also need zoning changed from B to C to produce beer on site. EVA has worked to purposefully downzone from C to B in a lot of the commercial strip areas to keep out unwanted light industry uses such as dry cleaning and auto services. Additionally, from an urban planning standpoint, commercial zoning adjacent to residential zoning and spot zoning are not ideal practices. There are some existing C zoned areas close by on Grand Avenue that would work well for a project such as this one.

At this point, the planning committee is against the upzone and moratorium lift, as it goes against what they have been working toward for 10 years. There's also a concern that it is a slippery slope if an exception is made for one business, the door will be opened to exceptions for others as well, such as a muffler shop. For example, in the past there was a request for a C upzone in the space West Town Bakery now occupies. They wanted to open a large dry cleaning plant there, which EVA was against. The point was made that Chicago Avenue is starting to see unique retail and different uses coming in, which is a positive step.

EVA worked extensively with Forbidden Root’s attorney, Rolando Acosta, to establish the transit-oriented development ordinance that allowed for the 1611 W Division site to be developed. It is possible that an innovative strategy can be explored in this case as well to maintain the protections available to East Village residents. Forbidden Root will hold a community meeting on Jan. 23 at 6pm in the proposed brewery site in order to discuss the project.


EVA has been discussing what we can do to guide the neighborhood in the right direction in terms of possibly zoning overlays and/or guidelines.

There are significantly more rental units than single-family homes according to our census tract information. While it is clear we aim to encourage architectural and human diversity in East Village, do you want to encourage single-family homes? Encourage conversion/ renovation of existing stock? Discourage demolition of existing contributing stock? Create tools to preserve existing structures?

In consideration of these questions, we must ask ourselves what is the higher priority: preserving historic stock or encouraging the addition single-family dwellings? Another point brought up is the banning of split-face block, as it's a cheap and low-quality building material that needs a lot of maintenance. Can we ban split-face block through zoning or is it more of an issue of educating residents about the material?

The next steps will be to compile a package of ideas for a vote at the next meeting. Some of the ideas to be included so far are:

We should consider inviting the alderman to discuss these issues so that we may have a greater understanding of what is feasible.

EVA is still considering the opportunity to expand Commercial Park onto the vacant lot rather than the mixed-use development proposed by Fifield, as this is the last large undeveloped property in the neighborhood.

When exploring possible uses of the 13th district police station site, a working group survey found that many were in favor of a land swap that would have expanded Commercial Park. Ronda Locke pointed out that there is currently nothing for kids over 12 there, except the basketball courts. Locke asserted that the expanded park would be in line with the Burnham Plan, and McKnight cited a plan done by Skidmore, Owings & Merrill ten years ago that included Commercial Park on Chicago Avenue. The comment was made that we should not block Fifield’s proposal without confirmation that the park expansion is actually achievable. i.e. Is Fifield willing to sell the land? Can the land and park be funded?

Locke, who is the President of the Commercial Park Advisory Council and was a member of the 13th District Working Group, previously had a freelance landscape architect draw up plans for the park expansion. She has also been speaking with the Chicago Park District regarding the possibility of this, and they are amenable to it. Alderman Moreno has written a support letter and has said he could help with impact dollars. Previously, there was $1 million committed to the 13th District project that could possibly be redirected to this project. Moreno has also stated he would vacate the alley in order to expand the park.

Some residents present did not agree with the expansion of Commercial Park for a number of reasons, including wanting a continuous streetwall on Chicago Avenue and bringing more density and people to the street through the currently proposed mixed-use development. Real estate professional Rich Anselmo commented that density doesn’t do much for commercial districts, whereas money does. Larger, more expensive commercial spaces generally fill in last after the smaller, less expensive spaces are occupied. He doesn’t believe that one-bedroom rentals will bring commercial development to the street. Greg Nagel, also in real estate, stated that there are advantages and disadvantages to both options, and it is hard to know if a park there will hurt or bolster development. Stephen Rynkiewicz pointed out that a fieldhouse fronting Chicago Avenue would be great, and that Eckhart Park is extremely overburdened with school sports and many other neighborhood activities.

McKnight proposes that EVA take three months to further explore the possibility of the Commercial Park expansion and funding before deciding on the Fifield request.


Many comments were recorded during the 30-day comment period, which has ended. Next will be the publication of the responses to the comments, which is on an unknown timeline, but expected in the next few months. For example, one concern was that the traffic analysis only encompassed one block to the east and west of Ashland, which does not seem to be an adequate area. The traffic study also only considered large arteries such as Augusta and Chicago, and EVA would like to see more info for the streets not included in the analysis. EVA's position will remain neutral in expectation of further information to come.


Residents should be aware that there have been a string of commercial robberies recently in West Town. Inside Home, Small Bar, Ugly Mug, Paperish Mess and others have all been attempted or broken into in the morning hours.