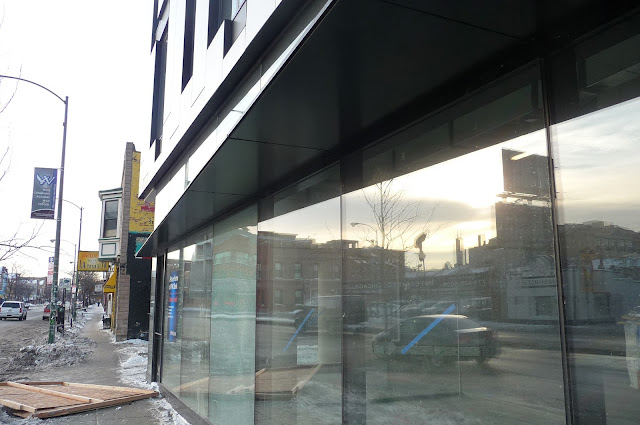 The Polish Triangle's prototypal transit-oriented development has a long history. The 1611 West Division location was a YMCA, a Pizza Hut and (at least on the drawing boards) a Walgreens drugstore. Next month it opens with 99 apartments above a PNC bank and Intelligentsia coffee bar.

This site has posted more than 700 articles since 2007, not counting archived editions of the East Village Association newsletter. Names have changed for prominent sites: News about the 1611 West Division address is filed under Pizza Hut and lead anchor PNC Bank. Similarly, the several Fifield Cos. apartment proposals for 1822-50 W. Chicago Ave. are known for the vacant site's last building, the AAA Distributing news agency, and its onetime prospects for renovation as the Chicago Bowl nightclub.

Search engines and real-estate blogs such as Curbed cite this site for background on these developments. Some of our most often-viewed posts date from several years back, including stubbornly persistent topics like auto theft. The desktop version of this site includes a search box at the top and a "tag cloud" of popular topics at the right. This snowy day is a good time to reflect on East Village history through our growing collection of source material.