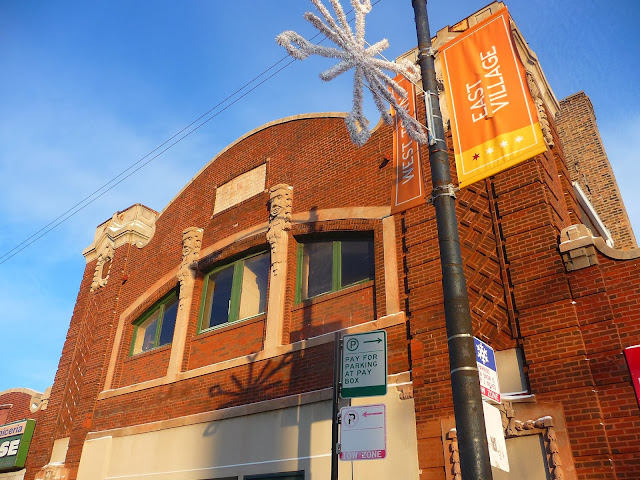 It's again a critical time for East Village and the other neighborhoods near the Loop. There's a strong attraction to neighborhoods near the core of the city. East Village already benefits from this demographic trend, and is challenged by it. The East Village Association recognized this and consulted other groups – and most importantly Ald. Proco Joe Moreno and his staff – to develop a plan that would address the challenges of Chicago’s changing demographics.

As part of this plan, in April 2013 Ald. Moreno agreed to maintain the liquor moratoria in the East Village Association territory until May 2015. It is important to note that not all liquor licenses are banned by the moratoria, and new East Village restaurants continue to obtain incidental liquor licenses. The purpose of the plan was to allow our past planning experience with liquor sales guide the continued development of East Village.

Forbidden Root brewery has demanded that the East Village Association agree to lift two liquor moratoria and upzone a Chicago Avenue parcel it does not yet own, from B to C zoning. This proposal undermines well-laid plans for our community and the alderman's agreement. The proposal asks too much from the neighborhood, and it asks too much from Ald. Moreno. Forbidden Root would force him to break his agreement without considering the consequences. Our experience tells us that these demands are contrary to development of a dynamic, sustainable and locally focused commercial district.

Locally brewed craft beer is very popular right now, because many craft brewers like Forbidden Root espouse sustainable and local production and have committed to contributing to their communities. These are commendable principles that EVA has always supported. Ironically, Forbidden Root’s demands may undermine them.

With the purchase of Goose Island Brewery by Anheuser-Busch InBev, some beverage operators are looking for the buildup and the buyout. We don't know that Forbidden Root is looking to one day sell, but it raises concerns. Ultimately there's going to be an industry shakeout. Forbidden Root appears to consist of high-minded and responsible people, but we're always concerned about the next owner. If Forbidden Root doesn't survive or gets bought up, the neighborhood may have a different operator that's less responsible and not locally owned. That's particularly a problem when we're left with a parcel with C zoning and the right to brew and sell alcohol.

Lifting the liquor moratoria raises other concerns. Admittedly the moratoria can be blunt instruments, but once the moratoria are lifted, a 2-block stretch of Chicago Avenue is open for a full year to new package liquor licenses and tavern licenses as a matter of right. Unfortunately, our neighborhood has had a history of problem bars and liquor stores. Without the moratoria, low land prices and rents on Chicago Avenue will allow for the establishment of liquor stores and taverns that make little capital investment and are out for a quick buck. This mix often brings on vagrancy, public intoxication, public urination and vandalism.

Without the moratoria. it's also incumbent on the neighborhood to establish why a new liquor license should not be issued. This is a high hurdle. Unlike our local chambers of commerce, the community organizations are all-volunteer and do not benefit from paid staff or taxpayer dollars. It's difficult to gather resources to oppose an objectionable applicant.

Many neighborhood residents just got done battling the issuance of a new package liquor license to Red Apple Convenience. Although EVA did not lead this effort, we wrote to support it. Compare the feel of Red Apple (at Damen and Chicago) to an Olivia's or the Garden Gourmet on Ashland. Do we really need a liquor store that feels that it needs employees behind bulletproof glass? The neighborhood is improving but we still face risks, and once a liquor license is granted it's very difficult to take away. The liquor moratoria have resulted in other benefits.

The unintended creation of entertainment and alcohol districts can drive out other retailers. Neighborhoods are then left with a district that caters primarily to those who do not live in the community. We're then forced to travel to other areas to shop – usually in cars, contrary to the sustainability ethic – because the record store, dress shop and bike store are all gone due to rising rents and inconsistent uses.

Division Street between Milwaukee Avenue and Damen Avenues serves as an example of how a commercial strip can grow and evolve with the benefit of a package liquor moratorium and a tavern moratorium. This stretch of Division Street has a healthy mix of different types of locally owned retail establishments. The moratoria on Chicago Avenue have the same rules that have long been in place on Division Street between Ashland and Damen. EVA believes that Division Street is attractive because the moratoria keep it from being overwhelmed by bars and clubs. This in turn encourages growth of locally owned independent retailers.

EVA spearheaded efforts to have pedestrian designations placed on both Division Street and Chicago Avenue. This prevents billboards, drive-throughs, curb cuts and other auto-centric uses. The designation also requires new buildings close to the street, to create a better pedestrian experience. EVA also initiated plans to implement consistent B zoning. Initially this was done to discourage auto-centric, heavier uses allowed by C zoning but inconsistent with residential and pedestrian uses. It also prevented the expansion of package liquor stores.

EVA's efforts go beyond zoning changes and moratoria. In the early '90s, Division Street from Ashland to Damen was nearly impassable for pedestrians. The vaulted sidewalks had deteriorated or collapsed, leaving gaping 6-foot holes protected only by sawhorses and caution tape.  Several of our members and a current board member had the opportunity to sit next to Mayor Daley at an event before the 1996 Democratic National Convention and invited the mayor to walk Division to show him how bad it had become. After Daley's tour, a streetscaping plan was approved. This initiative was unique in that it focused on pedestrian uses and created and protected the green spaces on Division.

The wide sidewalks, large trees and tree pits along Division Street today result are fruits of EVA members' labor. Their initiative spurred the development of stores and restaurants, and attracted customers who could walk from business to business. Division Street was then on its way to becoming the street that it is today. This took time, planning and patience. This collective experience guides our planning for Chicago Avenue.

EVA also fought for the preservation of the Goldblatt's building and the construction of a Chicago Public Library branch in this building. These efforts resulted in a dynamic and sustainable use in a building that was to be demolished and replaced by a one-story building with a street-level parking lot. EVA also spearheaded creation of the East Village Landmark District. This effort prevented the wholesale demolition of historically significant buildings. It also raised property values and encouraged renovation.  Again these initiatives took time, patience and planning.

More recently EVA worked on creating a transit-oriented development at Division and Ashland. Initially the developer proposed a 2- or 3-story building with a surface parking lot and drive-through. We worked with the developer to craft a better project. This project resulted in a change in city ordinances that's spurring new transit-oriented developments throughout the city. The work required a creative legislator and a development partner who was patient, engaged and committed to our neighborhood.

Our experience also tells us that small zoning changes can make a big difference. During the sustained boom of the '90s and '00s, a huge amount of residential investment was made in our neighborhood. The initial investments were renovations of existing structures. This made our neighborhood more attractive, which in turn attracted even more investment. But there was a downside as well. Due to a slight difference in residential zoning, different types of buildings were constructed north of Chicago Avenue. The unintended effect was an incentive to demolish existing structures. The construction of 3-unit condominiums at the expense of existing structures came simply because of this slight variation. The demolition rush was on.

East Village then lost building after building merely because of this loophole. Some bad buildings came down, but many beautiful, valuable and contributing structures were demolished. Some blocks were completely replaced with condominium units built with split-face block. Besides undermining the historic character that made the East Village attractive, this zoning difference taught us to be thoughtful when considering zoning and use changes. Slight changes can make an enormous difference.

We believe that adjustments to Forbidden Root's proposal can allow it to make an investment in the community without compromising community plans and protections built on a history of successful and sustainable development. We look forward to continuing to work with Forbidden Root to craft a proposal that would allow the business to open and to maintain the protections available to the surrounding residents.

Finally, EVA members are very optimistic about our community. We believe that both people and businesses want to locate here. We should take the time to review proposals inconsistent with current zoning, and to use the available tools to continue to grow and prosper and not destroy the qualities that make our neighborhood so attractive.

Forbidden Root is sponsoring a community meeting on its plan. It's scheduled for 6pm Jan. 23 at its property, 1746 W. Chicago Ave.