This group will explore the city’s history through reading and discussing books on events, themes, time periods, and personalities that have contributed to making Chicago what it is today. The book we will be discussing this meeting is Never a City So Real by Alex Kotlowitz. 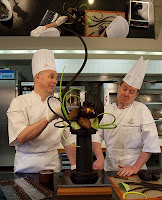 Film Screening – Kings of Pastry
In collaboration with the award-winning documentary series POV, the West Town Branch will be screening Kings of Pastry at 6pm Thursday, Aug. 8.

When Chris Hegedus and D A Pennebaker, award-winning filmmakers of The War Room, Startup.com and Don't Look Back, turn their sights on the competition for the Meilleurs Ouvriers de France, the country’s Nobel Prize for pastry, you’re in for a treat.

In Kings of Pastry, 16 chefs, including Jacquy Pfeiffer, co-founder of Chicago’s French Pastry School, whip up the most gorgeous, delectable, gravity-defying concoctions and edge-of-your-seat drama as they deliver their spun-sugar desserts to the display table. The inevitable disasters and successes prove both poignant and hilarious.
Film Screening – Patti Smith: Dream of Life
The next film in our ongoing POV series is Patti Smith: Dream of Life, which will be shown at 6pm Thursday, Aug. 22 at the West Town Branch.

Shot over 11 years by renowned fashion photographer Steven Sebring, Patti Smith: Dream of Life is an intimate portrait of the legendary rocker, poet and artist. Following Smith's personal reflections over a decade, the film explores her many art forms and the friends and poets who inspired her: William Burroughs, Allen Ginsberg, Bob Dylan, Robert Mapplethorpe and Michael Stipe. She emerges as a crucial contemporary link between the Beats, punks and today's music.

Shot in lush, dark tones, featuring rare performance clips and narrated by the artist herself, Patti Smith: Dream of Life is an impressionistic journal of a multifaceted artist that underscores her unique place in American culture, and winner of the 2008 Sundance Film Festival Excellence in Cinematography Award: Documentary.

In 1893, the 27.5 million visitors to the Chicago world’s fair feasted their eyes on the impressive architecture of the White City, lit at night by thousands of electric lights. In addition to marveling at the revolutionary exhibits, most visitors discovered something else: beyond the fair’s 633 acres lay a modern metropolis that rivaled the world’s greatest cities.

The World's Columbian Exposition marked Chicago’s arrival on the world stage, but even without the splendor of the fair, 1893 would still have been Chicago’s greatest year.

An almost endless list of achievements took place in Chicago in 1893. Chicago’s most important skyscraper was completed in 1893, and Frank Lloyd Wright opened his office in the same year. African American physician and Chicagoan Daniel Hale Williams performed one of the first known open-heart surgeries in 1893. Sears, Roebuck & Co. was incorporated, and William Wrigley invented Juicy Fruit gum that year.

The Field Museum, the Art Institute of Chicago, and the Museum of Science and Industry all started in 1893. The Cubs’ new ballpark opened in this year, and an Austro-Hungarian immigrant began selling hot dogs outside the world’s fair grounds. His wares became the famous Chicago hot dog.