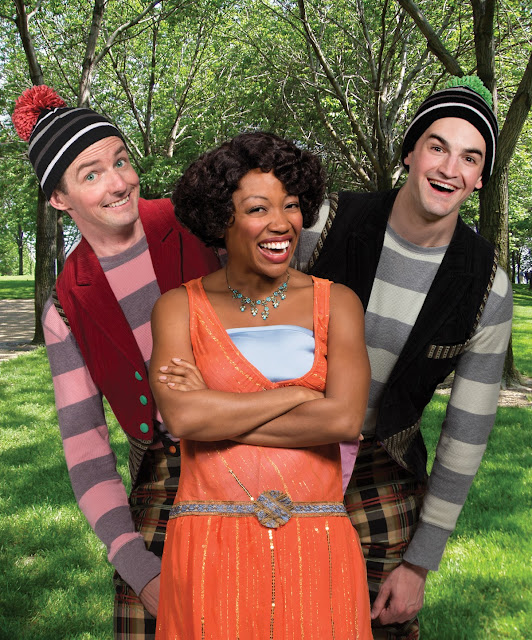 Samuel Taylor, Tiffany Yvonne Cox and Jürgen Hooper in the Chicago
Shakespeare in the Parks production of The Comedy of Errors.
By Alida Szabo

Building on the success of last summer’s inaugural Chicago Shakespeare in the Parks, the expanded 2013 program will bring William Shakespeare’s The Comedy of Errors free for all to neighborhood parks across Chicago. The first stop beyond Chicago Shakespeare Theater's Navy Pier base is a 4pm performance July 28 in Eckhart Park, 1330 W. Chicago Ave.

A specially equipped truck will roll into each park, a stage will unfold and a company of professional actors will share the delight of Shakespeare with families and neighbors of all ages.

Audiences will experience the wildly entertaining tale of a man and his servant landing in a foreign land, searching for their long-lost twin brothers. Everywhere they go, strangers insist that they’re old friends. Mistaken identities abound, but in the end, chaos gives way to clarity in this comedy filled with mayhem and madness.

Chicago Shakespeare in the Parks’ The Comedy of Errors plays in 18 neighborhood parks through Aug. 25. Previews are July 26 and 27 in Navy Pier's Gateway Park. Other West Side performances include July 31 in Dvorak Park, Aug. 8 in Humboldt Park, Aug. 11 in Douglas Park, Aug. 16 in Welles Park and Aug. 25 at Garfield Park Conservatory. For a complete schedule, visit chicagoshakes.com/parks.
1611 Division Calendar Eckhart Park