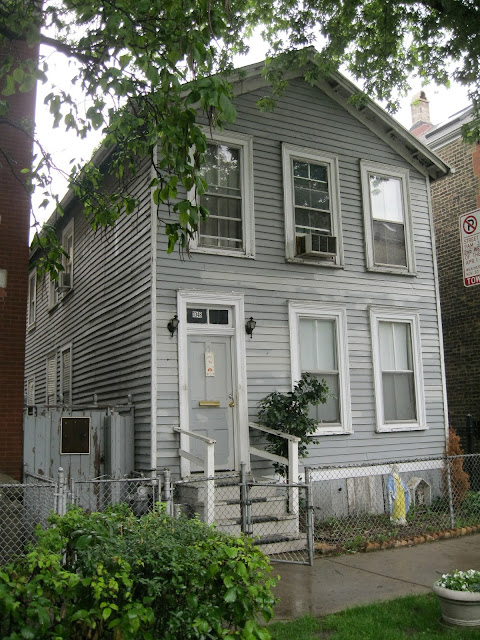 By Scott A. Rappe, AIA

A demolition permit application has been filed for 1048 N. Honore St., a modest frame structure located within the boundaries of the East Village Landmark District.

It is not clear why a request for a demolition permit is being entertained at this time. Nonetheless, the issue will be considered at a commission hearing on July 11.

This house has its original wood siding, windows, surrounds, even its front door and transom are intact – amazing for its age. No vinyl here, only 130-year-old, old-growth wood.

Normally, buildings within landmark districts are classified as either "contributing," meaning they are protected by the ordinance, or "non-contributing" allowing more latitude in what can be done to them. The classification of 1048 N. Honore was inexplicably omitted from the Preliminary Landmark recommendation, which was approved by the Commission on Chicago Landmarks in January 2005.

As is typical in the months following establishment of a preliminary landmark district, additional research and analysis was done by the Department of Planning and Development and consultations with the community were held. This effort resulted in a document called "Recommended Revisions to Building Catalog," dated June 22, 2005. This document adjusted the boundaries of the district to those that exist today, excluded some buildings, included some that were missed initially and recognized 1048 N. Honore as contributing.

A comprehensive and dynamic interpretation of history is one of the prime reasons for preserving a community’s historic assets. This simple wood structure contrasts with the red brick buildings that characterize the East Village district. Being both smaller and less ornamented than its masonry neighbors, it tells a slightly different story about the people living and building in East Village during Chicago’s post-fire period. The existence of this modest home allows observant passersby to consider an alternate narrative to the one told by the ubiquitous red-brick Victorians and contributes to a richer understanding of our neighborhood’s history.

Our few remaining wood homes connect us to the very earliest days of Chicago, some are from the 1870s. The person who built 1048 N. Honore probably witnessed the Chicago Fire, perhaps was even displaced by it. These Italianates belong to a generation earlier and are that much more valuable. They are easier and less expensive to renovate than the brick ones and can easily be insulated and air-sealed to modern standards.

Despite its differences, the inclusion of this structure in the district is completely consistent with the Criteria for Designation, being a finely detailed working-class residence dating from the last decades of the 1800s that retains its original siding, windows, window surrounds, entry door and transom. The loss of this modest building would imply a homogeneity that never existed and deprive the community of a full understanding of its history.

Update: I attended the landmarks hearing and argued that saving the building was consistent with the landmark ordinance. The landmarks staff report also recommended not issuing a demolition permit.
1611 Division Calendar Landmarks