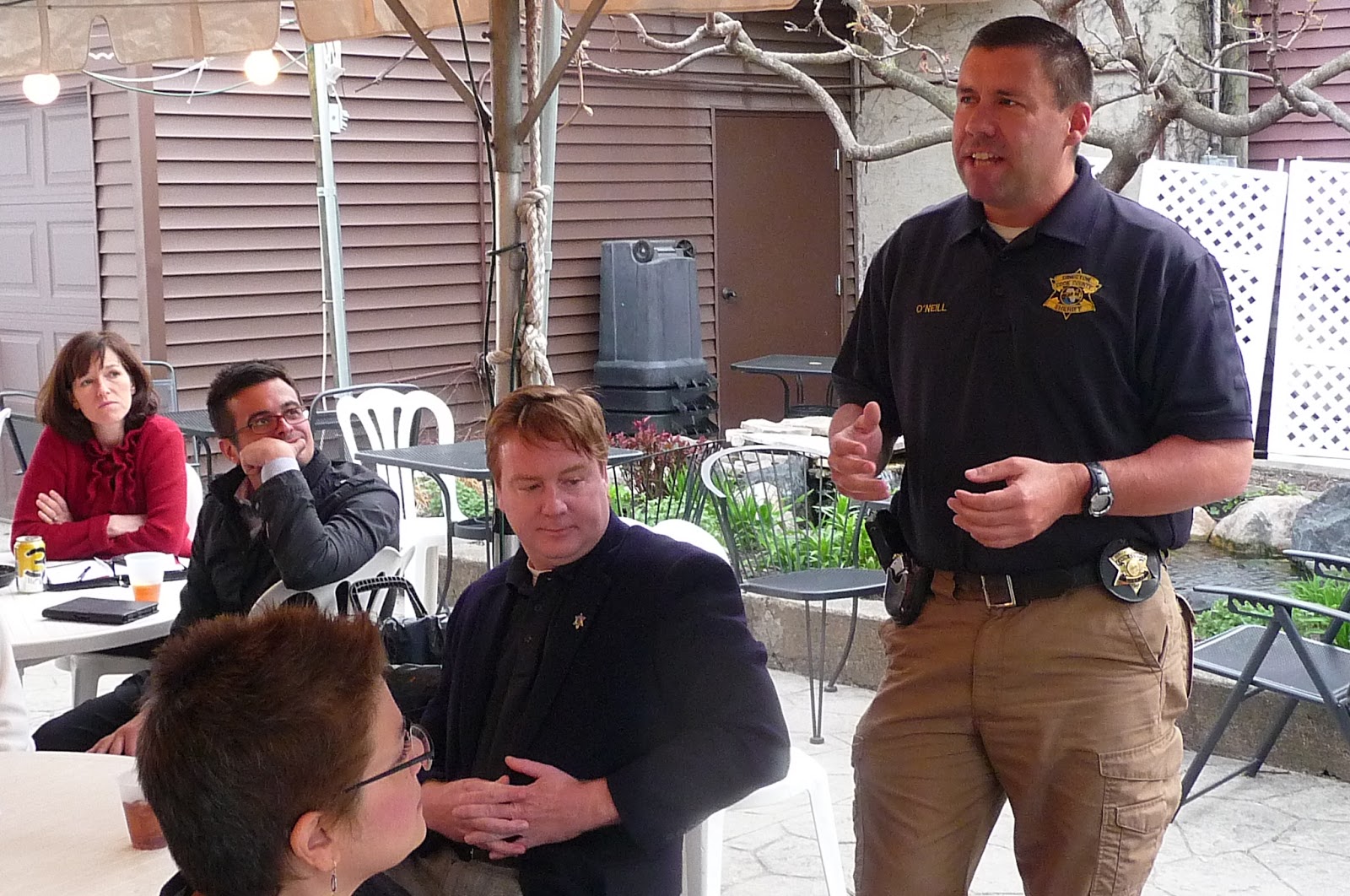 Guest speakers: Cook County Sheriff’s Police central warrant command staff director Bob O’Neill and chief Ed Burke
Director O’Neill joined us to speak about the repurposing of the Chicago Police 13th District Station. While there is no final move-in date yet, O’Neill says that there will be about 85 people working out of the building and about 40 of them will be there per day. The building will be open from 5am to 2am daily. This time will be divided into two 10-hour shifts. The officers will drive out in their cars after roll call and will take their cars home at the end of their shifts. About 5% of the cars will be marked.

No prisoners will spend the night in the building, though the officers will sometimes bring prisoners in to question for a brief them. In fact, they want to remove the existing jall cells altogether, and use that as part of their operational space. Ultimately, they would like to ask other law enforcement agencies to join them. There will also be a custodian/facilities manager present, most likely from 12am to 8am.

There are currently about 42,000 open warrants in the city, which will be prioritized by offense, with the most violent being addressed first. A portion of the staff will be dedicated strictly to child support enforcement. Community members can search the Cook County website to see which warrants are in their area.

Chief Burke pointed out that the mere presence of officers in the area will be a crime deterrent, even though they are not beat cops. According to their oath, the officers must act if they see a crime in action.

Energy Impact Illinois, Vito Greco
Greco wanted to remind our community that Energy Impact Illinois' homeowner grant program has been extended to the end of August. Through this program, homeowners can receive rebates to help lower energy bills. Owners of 2-4 flats and single-family homes can get grant money for 70% off up to $1,750 for air sealing and insulation.

The process begins with a home assessment, after which the homeowner will be given a detailed report with recommendations, cost, expected energy savings and monetary savings. There are no income restrictions to receive a grant. This program is funded by the Department of Energy through the American Recovery and Reinvestment Act and is a great program to take advantage of, as it is not a common one. For more detailed information and to get started, go to energyimpactillinois.org/ news/ energy-impact-rebate.

Marwen public art
Murals completed by a group of students at Marwen led by local artist and teacher Layne Jackson have been installed on the façade of the Amber Building at the corner of Chicago & Marshfield. West Town SSA #29, which funded the project, approached the owner and developer, Building Blocks, about displaying the artworks. Building Blocks was happy to be a part of the project and even attached the panels to their façade. The work will be up until July if you’d like to check them out. West Town SSA is working to broaden its public art program and welcomes ideas, suggestions or assistance from the community.

Please see the following websites if you’d like to know more about any of the community members involved in this project: marwen.org, laynejackson.com, amberbldg.com, bblocks.com or westtownssa.org/home/.

Library partnership
Gladys Anselmo spoke about the partnership with the West Town branch of the Chicago Public Library at 1625 W. Chicago Ave. They are collecting photographs from community members of events in the area as well as accomplishments of neighbors who are interested in sharing, for display on a bulletin board in the library.

There is a lot of new, wonderful programming for all ages as well, so stop by to check it out. More info can be found at www.chipublib.org/branch/details/library/west-town/

Parks
Commercial Park: There will be a block party and potluck on Saturday, June 16 from 12-9pm on the 1800 block of Rice Street (from Wood to Wolcott). The event is free and there will be games, bounce houses, and a dunk tank. Fun for all ages! commercialpark.org

Eckhart Park: Eckhart Park was successful in their fundraising efforts for the new playground and they are now in the queue with the city to go ahead with the project. http://eckhartparkchicago.org

Planning, Preservation & Development
Division & Paulina: The SRO developer is targeting business employees from out of town who would stay for about 2 weeks to a month. The price point would be around $2,000 per month, or $70 to 100 per night depending on the season.

Marshfield & Paulina: The site is currently zoned B and there is an ongoing discussion to swap the alley. Contact Scott Rappe with any questions or info.

Master Plan initiative: Joshua Hahn is continuing his work on his urban planning project, exploring where the neighborhood and community would like to be in to next 10 to 50 years.

Schools
LaSalle II: The school is currently working to redo the entire campus, and the alderman is asking for incremental impact dollars for the project. The city is currently not doing any projects that aren’t fully funded until 2018.

Peabody: There was a recent hearing regarding the plan to merge Peabody with Otis. Ald. Bob Fioretti testified against the closing of Peabody at the Board of Education hearing. The issue is now in the hands of the hearing officers, who will make a recommendation to the Board of Education by the end of the month. Please go to the EVA website for ways to voice your concerns on the matter. [Update: On May 22 the school board voted to close 50 schools, including Peabody.] news.eastvillagechicago.org