Business Minute: Steve Quick Jeweler
Store manager Sarah Wortman recently opened Steve Quick Jeweler at 1909 W. Division St. Steve Quick opened his flagship store in Lincoln Park 26 years ago, expanded to a second location in Lincoln Square five years ago, and just this past fall opened his Wicker Park store. Wortman said that Quick looks for spots with a lot of character. The jeweler is known for bridal sets but offers a large selection and can fix watches. Customers can create their own wish lists so loved ones know exactly what to get for special occasions.

The business has been running an electronic billboard ad for the past three weeks or so, and residents are concerned that this doesn’t mesh with the community’s negative stance on the billboards. An EVA member pointed out that she is keeping track of which local businesses are advertising, and will subsequently set up a neighborhood boycott of those businesses. Many in the community feel that the billboards are obtrusive, not neighborhood-oriented, and a public safety issue. EVA has also been focusing on pulling away from auto-oriented commerce. Wortman pointed out that Steve Quick has always been neighborhood oriented and did not realize the effect on the neighborhood. She welcomes the feedback and will take it into consideration.

People also applauded the new Steve Quick storefront, which has a baseball theme currently. Wortman said Quick wants the windows to stand out even when the store is closed and the jewelry is not on display.

"Augusta and Noble" tells stories of people in our neighborhood, and of those that use the settlement. The process started with story circles, and eventually a playwright crafted a play based on those stories. The issues raised are just as relevant to adults as to children (ages 9 & up recommended). The show opens April 13 and runs through May 16. A discounted neighborhood rate of $10 per ticket applies for residents within the 60622 and 60642 ZIP codes. Go to adventurestage.org for information. 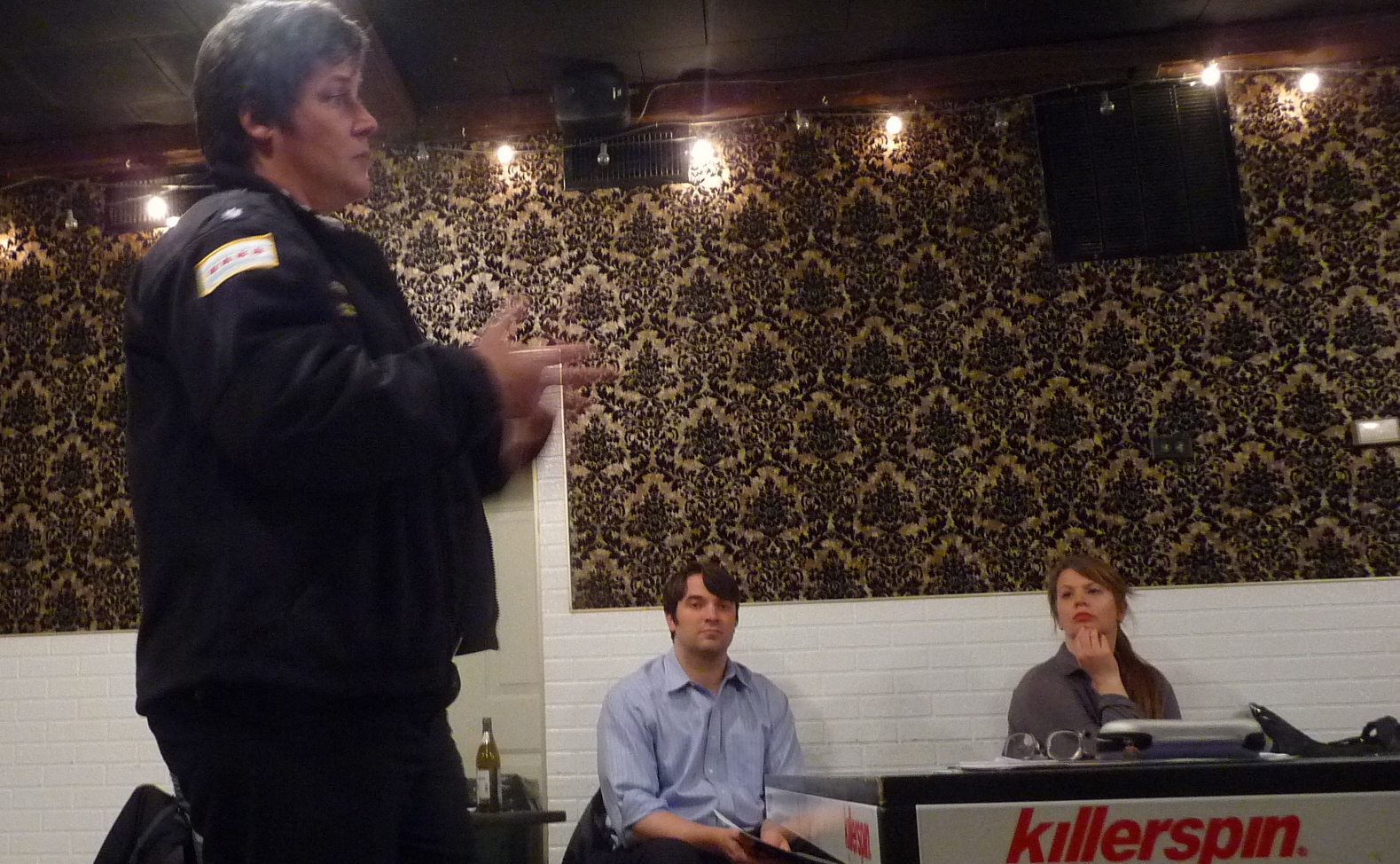 Guest Speaker: Cmdr. Melissa Staples
We were honored to have new 12th District Police Cmdr. Melissa Staples tell us about herself and her role in the community. Staples has been on the job for 22 years, in various areas including patrol, asset forfeiture and one of only five homicide lieutenants in Chicago, as well as the only female. Staples served as the Albany Park commander for two years. Her new post as 12th District commander is very special to her, as she has lived in the community for 13 years.

Staples stressed that she is sensitive the closing of the 13th District station and will not allow the north end of the district to get less police attention. Staples says she has the benefit of the most manpower in the city and will take advantage of that fact. She has already created a team that focuses on robberies, burglaries and major thefts. The district is already down 5-10 of those incidents for the year, a testament to the efficacy of the team. If you see something that doesn’t seem right, don’t hesitate to call 911.

There has also been an uptick in car break-ins. So far this year there have been 277 cars stolen in the district, 87% of which have never been recovered. Staples tells community members not to leave anything in your cars, even spare change. The smallest things can attract thieves.

Can we hold CAPS meetings every month during the summer since crime rates typically rise in the warmer months? CPD hasn’t discussed it but attendance is an issue. EVA president Neal McKnight brought up a proposal that we add CAPS as a component of EVA meetings. This way there would be a monthly CAPS meeting as well as a good turnout.

Our concerns are quality of life issues and we don’t want small issues to become big issues, but our resources are strained. How do you plan to address this? Staples says she hasn’t lost any officers except for some retirees. She has really been making a point in roll call to give focus to the officers; they are not just driving around aimlessly. For instance, she has one officer that focuses on licensing. Staples wants to be contacted with our problems and issues regarding the district, which would typically be through the CAPS process.

Many blocks are very open about the crimes happening in their area, but how can we get the information out about good news, like when a crime is solved? Staples says this is difficult with 127,000 people in the district, and the police website is somewhat difficult to use. She wants e-mail blasts and easier searching on the website, which the department is working on. Staples wants to make everything more transparent, share success stories and make it easier to see crime patterns.

Parks & Schools
LaSalle II has put in an official request to convert the 1800 block of West Haddon to eastbound to help with traffic issues, and asks that only teachers and administrators have access to the alley south of the school.

Do-Division
The annual fest is looking for business sponsors.

Commercial Park
EVA is once again partnering with Commercial Park for the annual Earth Day event from 9am-12pm April 20. Community members can come get supplies at the park, then collect trash around the neighborhood. There will be activities at the park and food provided. Whether or not you attend, please try to clean up around your block when you see trash. Commercial Park has also been trying to install a mural similar to the mosaic at LaSalle II, and recently received a small grant from Friends of the Parks toward that project.