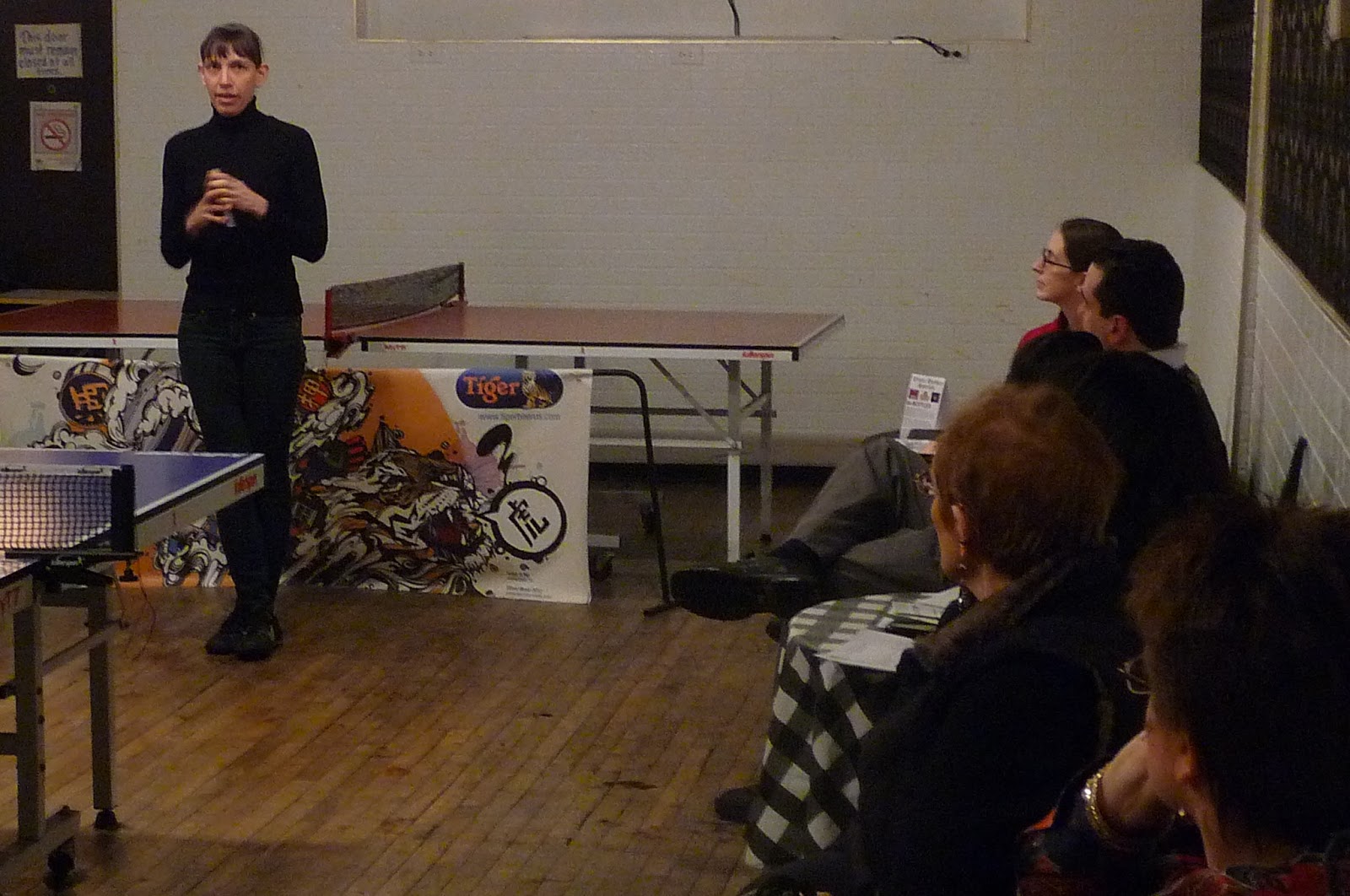 Upton’s Naturals
Upton's Naturals is a Chicago-based natural foods producer specializing in vegan/vegetarian meat alternatives. Its main product is seitan, which is made from the protein in wheat. Both Whole Foods Market and Green Grocer Chicago carry Upton's Naturals products.

Upton’s visited EVA to announce the future opening of its new production facility at Grand & Hoyne on a lot that has been vacant for 30 years. A truly local company, Upton's Naturals started in Skokie and currently is located at Fulton & Damen. A small takeout café will open on the corner of the new lot with a rotating menu of sandwiches, baked goods and other vegan items. A planned community yoga space can be attended by donation. Completion of the building is anticipated in June or July. Upton's Naturals currently employs 16 people and will add more for the café.

Banco Popular (Popular Community Bank)
Branch manager Natalie Trempe and assistant branch manager Edith Armenta stopped by to talk about the Popular Community Bank branch at 1445 W. Chicago Ave. During February they are running their America Saves promotion. If you open a savings account, the bank will contribute extra money as an incentive. For example, if you put $250 into a new savings account, the bank will contribute an additional $50 to your account. Popular's Facebook page is conducting an I Love Saving photo contest. Simply upload an original image of what you’re saving for this year, and you will be eligible to win the grand prize of $5,000. Go to the Popular website at www.popularcommunitybank.com for more info.

Guest Speaker
Tim Nazanin, outreach director for U.S. Rep. Mike Quigley, came to speak to the EVA membership, as East Village is a new addition to the 5th Congressional District. Nazanin pointed out that it is great for us to be proactive on issues that concern us because there was no formal transition in the new boundaries. Congressman Quigley sits on the House Committee on Appropriations, where he serves on the Subcommittee on Transportation, Housing and Urban Development. Nazanin said that Quigley's office can help with veteran’s benefits, IRS, passports, immigration and other things. Staff will even set up tours of D.C. and the White House if you contact the office. Additionally, staffers will write support letters for nonprofits and small businesses to help them get grants. Peter Locke pointed out that they have been very supportive of and helpful to Local First Chicago.

CAPS
The first meeting for Beat 1212 (part of former Beat 1322) is at 7pm Feb. 8 at St. Helen’s, 2347 W. Augusta Blvd. Tom Tomek stressed that it is very important to go to CAPS meetings and voice any concerns you may have about our community. The next Beat 1213 meeting will be at 7pm March 20 at Northwest Settlement House, 1012 N. Noble St.

Winchester & Augusta
Neighbors expressed concern about the old Builder space on the northeast corner being renovated into a restaurant, and that this is not a compatible use for that site. Some have heard that the owner wants a liquor license and a back patio, and will be open from 7:30am to 12am, though this has not been confirmed. Neal McKnight is reaching out to the owner to ask him to present his plans at a future EVA meeting. McKnight also suggested that concerned neighbors send a letter outlining their concerns to Ald. Robert Fioretti (2nd), and copy Ald. Proco Joe Moreno (1st).

4am Liquor Licenses
There have recently been a number of requests for 4am liquor licenses. Ald. Moreno is proposing a ward-wide 4am liquor moratorium, which would apply only to future licenses and not existing ones.

LaSalle II
The school currently has an interim principal during its search for a new principal.