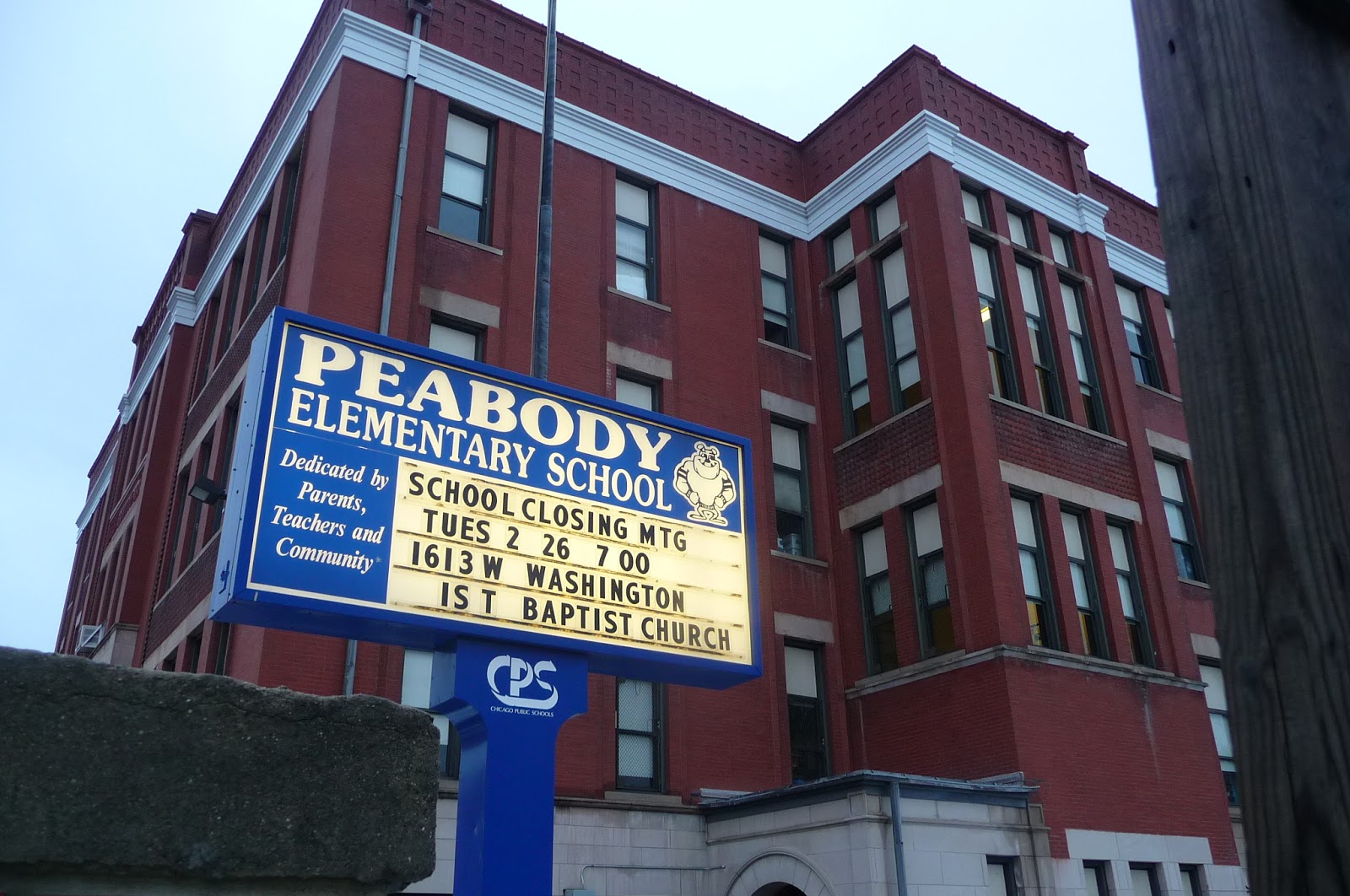 The Chicago Public Schools could set off changes in East Village classrooms as its March deadline approaches for a final list of school closings.

"We're in a wait-and-see period," says Frederico Flores Jr., principal of Elizabeth Peabody Elementary, one of 129 schools being considered for phase-out. The school at 1444 W. Augusta Blvd. is the neighborhood school for East Village residents east of Ashland Avenue.

The prospect of Peabody closings is on Monday's East Village Association agenda. The meeting is set for 7pm at Happy Village, 1059 N. Wolcott.

A hearing this week on closings in the CPS Fulton Network of West Side schools drew 800 people, according to a Chicago Teachers Union report. They included Ald. Proco Joe Moreno, who is scheduled to attend Monday's EVA meeting.

"Peabody is a general-admission elementary school, and there are not many of them," says CTU organizer Marty Ritter. "These are high-quality schools." LaSalle II magnet school at 1148 N. Honore is a converted neighborhood school, and Pritzker School at 2009 W. Schiller maintains both magnet and general-admission tracks.

Peabody's enrollment of 259 is less than half the building's capacity, according to a Chicago Tribune analysis of CPS utilization data. CPS estimates that updating the building would cost $11.6 million.

Peabody was slated to close in 2009, but spared when community protests challenged the CPS space-use calculations. The closings would have sent Peabody students to Talcott at 1840 W. Ohio St., or outside East Village to Ogden, 24 W. Walton St., or Lozano, 1424 N. Cleaver St. However, Lozano is another 2013 closing target.

Under-use is just one factor in this round of consolidations, which may work in Peabody's favor. Peabody has 42 special-education students who would have to be placed elsewhere, and the Near North special-ed school at 739 N. Ada is also on the chopping block.

Peabody's small campus is also easier to secure, and one student testified this week that closing the campus would force pupils to cross gang lines.

Administrators are sensitive to the kind of gang tensions that arose at Wells and Clemente high schools following the close of Austin Community Academy in 2007. "Gangs recruit from the middle-school grades," Flores notes. High schools are off the table in this round of closings.

Flores argues that Peabody has been able to stay open by showing test-score improvements. Over time Peabody's scores on state tests have improved, but they continue to lag neighboring schools. Peabody is on probation for its slow growth in the number of pupils exceeding state standards. That's a heavy lift: Three-fourths of the student body is Hispanic, and CPS classifies one-fifth as limited English learners.

If Peabody is confirmed for closing, Flores says, at least two more hearings would be required to air community concerns.

And debate might shift toward disposing of yet another public building. After floating plans for a new park, Ald. Moreno this week announced plans to turn over the shuttered 13th District police station to the Cook County Sheriff.

The Peabody building adjoins Noble Street College Prep, which prompted speculation that the 2009 plan would have converted it to a charter school. "We would like to see it remain as a public elementary building," the CTU's Ritter says. "Some of these old buildings are built very well. If a school in the public way on Augusta goes vacant, what happens then?"
Schools Stephen Rynkiewicz