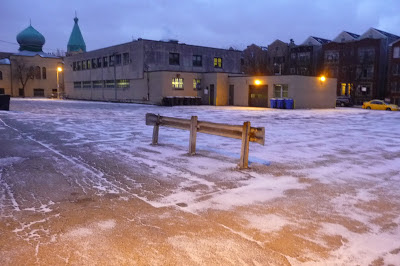 
Winter Mixer 2013
Tom Tomek will bring the old EVA signs to auction off. Gladys Anselmo stated that most of the party supplies will be donated, but we will need to spend $100-200 of EVA funds. Everyone is encouraged to bring a new neighbor. Gladys Anselmo/Peter Locke will put together a half-sheet takeaway for people to learn more about EVA and what we do.

Suzi Wahl will do a story time for the kids, so the adults can mingle. The suggestion was made to invite all of the other neighborhood groups such as Wicker Park Committee, Chicago Grand Neighbors Association, Ukrainian Village Neighborhood Association, Eckhart Park Advisory Council, etc. Neal has already invited many of them. Another fundraising idea would be to get EVA T-shirts made with our logo on them. We should get them made locally if we do this.

Next meeting’s speakers
Business Minute: Suggestion made to invite someone from the Russian baths on Division to speak at the February meeting.

CAPS
The Chicago Alternative Policing Strategy is now operating at a reduced capacity, and East Village beats have been divided into 1212 (west of Wood) and 1213 (east of Wood). There will be bimonthly meetings (once every 2 months) for each beat, and the 1212 & 1213 meetings will alternate, so there will be a meeting every month. 1212 meetings will be held at St. Helen's Church (2347 W. Augusta) on the first Tuesday of every other month, with the next meeting on Feb. 5 from 7-8pm. The 1213 meetings will be held at Northwest Settlement House (1012 N. Noble), with the next meeting to on Wednesday, March 20 from 7-8pm.

Greg Nagel asked if it would be possible for EVA to have a greater emphasis on crime, and perhaps encapsulate CAPS into EVA in some way, by having a meeting after ours for example. We could have CAPS coordinator Molly Murray ask an officer to stop by the EVA meetings sometimes. Neal McKnight would like new Cmdr. Melissa Staples to speak at our February or March meeting (Tom Tomek will outreach to Staples). McKnight suggested we come up with a name for this integration and do it at the beginning of our meetings.

McKnight and UVNA have been asking for real numbers regarding crime before and after the closing of the 13th District police station. For instance, how many officers per beat are there? How many total are there per district? What is the crime closure rate? How do they calculate the need for officers? We are expecting to get a report with an analysis of the 90 days before and after the closing to assess crime levels. Neighbors have noticed an uptick in gang graffiti since the station closing.

Planning, Preservation & Development
1822-1850 W. Chicago Avenue: Chris Fifield was present to discuss the newest iteration of the project, requesting a special use permit from Ald. Proco Joe Moreno to incorporate live/work units into the buildings. There will be 3 adjacent 12 rental unit buildings, each having one live/work space on the ground floor alongside typical retail spaces, for a total of 39 units.

The smaller commercial spaces are flexible and can be combined for a bigger tenant, or a small retail tenant could take one space. The parking count is down to 51 spaces (from more than 100) for the whole development. Developers are still looking at traffic patterns to best design the site circulation.

The building will be Type II construction with enclosed parking. The developers are planning to address the park in some way and asked the Chicago Department of Transportation if the project could incorporate a parkway. CDOT would not allow it, as it did not want pedestrians crossing the alley.

The live/work tenants will have to have a business license, and there are allowable and prohibited uses. Some examples of allowable uses are artist studio & sales, offices, personal services and retail sales. Some examples of prohibited uses are massage, operations requiring a Children’s Activities Facility license, food & beverage sales, firearms, ammunition, tobacco & smoking accessories. Also, the work portion of the space must be a minimum of 1/3 of the floor area, it must be designed as a storefront, and it must be visible from the sidewalk. These units will be desirable also due to their high 18-foot ceilings and loft style. Fifield’s overall goal is to close soon and build the project this summer.

EVA requests that the ability for a live/work tenant to renew its lease should require a valid business license to insure proper adherence to the live/work ordinance. Peter Locke suggested that there be a connection from Chicago Avenue to Commercial Park. Even though CDOT has said no to the parkway, can we look at some possible replanning in order to gain this access. EVA would also like to bring in local businesses and avoid national chains in the retail spaces. Local First Chicago is currently working on getting together a legally binding ordinance to bolster local businesses.

Miller Lumber: There has been a reconfiguration of the project, including a reduction in parking, resulting in 3 fewer units (down to 36 total). There will still be 2 restaurants on the ground floor, with the residential lobby between the spaces, so they can’t be combined into one larger space.

Building at Paulina & Division: The building has been sold and there are rumors about it being turned into a hostel. The new owner has two other hostels in the city. While no permit has been pulled, this is still of concern. EVA wonders how it would be managed? The building currently has B zoning and is subject to the liquor & tavern moratorium, as well as the pedestrian designation in place. A bed & breakfast or vacation rental would be allowed in this building, and Scott Rappe will look into the ordinances in more detail.