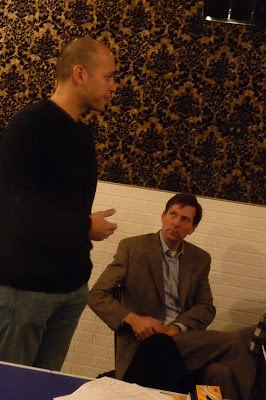 Holiday party
Gladys Alcazar-Anselmo and Peter Locke have been hard at work securing a location and details for the event. The party will be held at 6pm Jan. 25 at Banco Popular, 1445 W Chicago Ave.

The aim is to keep it simple, with drinks and appetizers. Alcazar-Anselmo is working on securing raffle prizes to encourage people to bring new neighbors by entering them in a raffle if they do. The idea was brought up to auction off the old East Village signs. E-mail Locke or Alcazar-Anselmo with any ideas, more donations or raffle prizes, etc. There will be a $10 entrance fee that will cover expenses.

Next meeting’s speakers
Business minute: A representative from Pure Vibes Fitness at 834 N. Ashland Ave. will give a presentation. There may also be someone from Village Yoga, which is located above Pure Vibes in the same building.

Someone from Dominick’s approached Suzi Wahl about giving a presentation at the January meeting. Greg Nagel stated he had contact info for someone there that he would pass along to Neal McKnight, who will contact Dominick’s.

Guest speaker: McKnight invited a representative from Mike Quigley’s office, and is waiting to hear back. The alderman should be invited to the meeting if someone confirms. Another idea would be to have a speaker from the city Department of Housing & Economic Development to discuss its vision. Nagel suggested a Meet Your Neighbor platform in which each person would introduce themselves for a few minutes. McKnight suggested we think about a format like that for the future.

West Town summit
The West Town Community Leaders Summit took place on Nov. 29. McKnight, Rob Schickel, and Meghan Quinn attended on behalf of EVA. Schickel gave a presentation about EVA. Reps from many other neighborhood groups attended and spoke briefly about their interests. Aldermen Proco Joe Moreno and Scott Waguespack also attended and want to continue the communication between all of the groups.

McKnight requested that Schickel set up the next meeting with Ukrainian Village Neighbors Association and Wicker Park Committee to focus on street fest safety, security, limitations, plans and what changes we would like to see.

Nagel brought up that it is important for us to communicate to the community and to our alderman what we have been doing throughout the year. We should put out a Year in Review to highlight our successes, and include issues that are coming up as well.

Planning, Preservation & Development
818-820 N. Marshfield: EVA received a proposal for 18 condos, and the developers are looking for a zoning change from B1-2 (when it was going to be a parking garage) to B2-3, which would be much denser. We would like them to present at the January board meeting with the understanding that we want them to stay within zoning. Unless there is a special reason, such as with the Pizza Hut site, we want to remain consistent that we do not agree with zoning changes. However, it looks like they need the zoning change because under their current zoning they would be required to do retail at the ground floor, and this site is on a side street.

Miller Lumber: This project is on hold and has no permits. Neal will call for more info on the status of the project.

1822-1850 W. Chicago Ave.: Chris Fifield came to present some new ideas to build three smaller buildings with smaller, "fine-grain" retail spaces. The smaller retail would reduce liability for Fifield as it would be easier to maintain tenants than for the original 30,000-square-foot space. There would be three live/work units on the ground floor, one in each building. One of these units could be an art studio for example. The new proposal would be a combination of 2- and 3-bedroom units and would stay within current zoning. They would have to get special approval from the alderman, who is interested in live/work concepts.

4am liquor licenses: There have been a few requests, such as Innjoy. WPC and UVNA are against allowing them. The proposal is to enact a moratorium against 4am licenses on Division from Western to Milwaukee. McKnight will work with WPC and UVNA to put the proposal together. We should have the general membership vote at the Jan. 7 meeting.

Augusta Blvd.: EVA would like to get streetscape improvements along Augusta. We need to get the aldermen on board.

Tree pits: EVA has decided to refrain from action on this issue.

Tax appeals
Aaron Bilton from the Cook County Board of Review spoke about appealing your property taxes. You can now file online, and Bilton mentioned that 70% of all complaints are now received through the online service. There is no cost for filing a complaint, and the only outcomes will be a lowering assessment or a statement that your assessment is fair. Your assessment will never be raised.

If you provide evidence with your complaint the staffers will use it, but if you do not include evidence, they will look it up for you.

You do not need to be an attorney to file with the Board of Review. You may represent yourself, but you may not represent anyone else.

Any savings you are granted will last for the assessment period of 2 or 3 years. You should have gotten a notice of reassessment from the Cook County Assessor, and even if your assessment went down, you can still file because others’ may have been reduced even more.

There were 145,000 complaints last year, and they expect to receive 155,000 this year. You must file by Dec. 18 and you will hear back in about 3 months, which is generally about 8-10 weeks from the time your township closes. Postmark any evidence or documentation to the address on the back of the complaint form within 5 days. If you want a hearing, hold on to your evidence and bring 2 copies to the hearing, one for you and the other for the Board of Review. However, most do not need a hearing unless they have a very unique situation, such as a lot of foreclosures on the block. Your assessment is based on both market price and uniformity.

A great resource is the Cook County property tax portal. If you give your e-mail address for the database, the county will notify you when your township opens next year.

Holiday party
The party will be held at 6pm Jan. 25 at Banco Popular on Chicago Avenue. For a $10 cover you will get beer, wine and pizza. Bring a dessert to share. You can also be entered into a raffle if you bring a new neighbor to the event.

CAPS
It is unclear when the police will leave the 13th District station; some have heard Dec. 17. There has been a remapping of the beats. EVA will reach out to the new commander. Most likely the building will be torn down and the site converted to a park.

Planning, Preservation & Development
1822-1850 W. Chicago Ave. Chris Fifield will be presenting at the next board meeting.

Paulina & Division corner: The property on this corner has been sold by the owner, who also owns Rite Liquors. The new owners are not local, and there has been talk that they want to turn it into a hostel. There was previously a plan for a boutique hotel, but a lot more work would need to be done on the building.

Amber Building: EVA has been invited to walk through the terracotta building across from Goldblatt's. The owner is Building Blocks, which has been doing work on the building. Curbed Chicago did a walkthrough recently and images are on its website.

Damen & Chicago: Lorraine’s diner is demoing today. There might be a new restaurant at that location in the future.

Newsletter
We want to keep the community up to date through our website, and you can become a member on the site. If you have your card set to auto debit and that card expires it will not charge you, so your membership may have lapsed. You can update your info online, or you can ask KK if your membership is up to date.

Commercial Park
The advisory council threw a holiday party last weekend and it was a huge success. Don’t forget about yoga every Thursday. There are also many kids' activities Tuesdays through Thursdays. Check out commercialpark.org for more info.