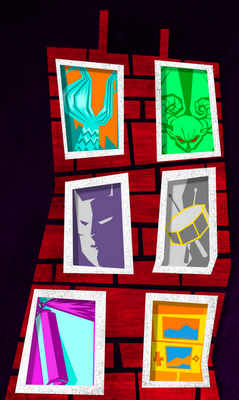 Mention the local ZIP code by phone at 773-342-4141 or at the Vittum Theater box office, 1012 N. Noble St., to get $10 tickets for the current Adventure Stage Chicago children's theater production.

The Midwest premiere of Six Stories Tall, a play about mermaids, monsters and spray paint, is recommended for ages 8 and older and runs through Dec. 13.

The Adventure Stage Chicago production marks only the second time all six tales have been staged. The play debuted at Washington D.C.’s Kennedy Center in 2008 as Mermaids, Monsters and the World Painted Purple. It includes the award-winning short play "I Am Not Batman" from the 2007 Humana Festival in Louisville, Ky.

"The gift that Marco Ramirez has given us with Six Stories Tall is the joy derived from the power of youthful imagination and the conceit that young people can be superheroes, guardians and saviors," director Tom Arvetis says in the publicity material. "We see a boy save a mermaid, a girl defeat the devil at the crossroads, another boy become Batman, another girl defeat a legendary monster relying on video game skills, a boy and a girl invent a musical language together, and a boy express his love for his grandfather by literally changing the world."
Arts Calendar