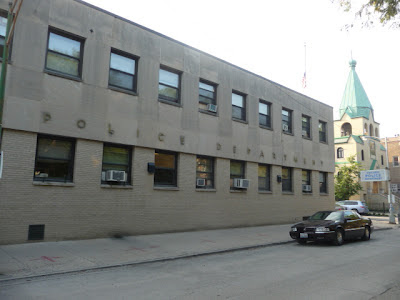 Chicago will demolish the Wood Street police station in October to make way for a city park. "The city determined that it was too costly for anyone to renovate the 13th district building," Moreno said in an Aug. 9 statement.

Architects Peter Frisbee and Grace Rappe set a ballpark estimate of $4 million to $6 million to upgrade the building at 937 N. Wood St. As members of the alderman's working group with Catherine Garypie, Ronda Locke, and Audrey Rath, they met Aug. 7 with representatives of Mayor Rahm Emanuel, the park district, police and the city's buildings and Housing and Economic Development departments.

A majority of 351 respondents to the working group's online survey would raze the station for outdoor use, Moreno noted.

The group will lead community meetings and poll residents on park uses. Its report is due as police move in October to a consolidated station house at 1412 S. Blue Island Ave.

The goal is to have a new park installed this spring, with a ribbon cutting early summer, said Locke, Moreno's community outreach director. Garypie, Locke and Rappe gave East Village Association members a preview of their presentation at EVA's Aug. 6 membership meeting.

The park district would have $400,000 available for park construction, according to Garypie's notes, with $200,000 from 1st Ward capital funds matched by local development contributions. The city earmarked $113,000 to level the building, determining that neither the city budget nor private fundraising would support rehab.

Moreno last year said Emanuel pledged an “innovative, impressive and appropriate” use for the site, along with a police presence. At the meeting Moreno asked police to identify a satellite site; EVA has proposed the city-owned Goldblatt's Building at 1613 W. Chicago Ave.

The city will investigate whether asbestos poses a demolition issue, and the park district will determine if it will manage the new facility from nearby Commercial Park, 1845 W. Rice St.
Commercial Park Police Stephen Rynkiewicz