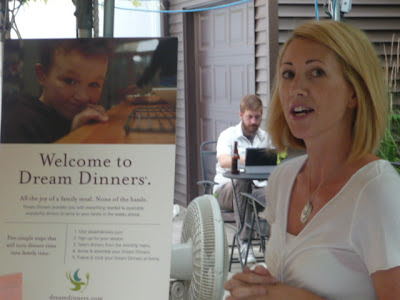 Business Minute
Guest Speaker Jodi Hamilton spoke to the group about her Dream Dinners location at Chicago & Damen. Hamilton is president and CEO of the franchise location, which opened 16 months ago, and she and her husband are also proud to call themselves residents of the neighborhood.

Dream Dinners is a meal-assembly service that provides everything necessary to create healthy, family-friendly dinners. Register online or in the store to attend a meal assembly session, where you can prepare ingredients, and then pack your uncooked dinners to take home and make throughout the month. It’s even BYOB during the sessions if you want to enjoy your favorite wine while you prepare. Check out their website at www.dreamdinners.com/chicago for more information.

The alderman has been trying to meet with the Chicago Park District, as the most discussed use for the space at the moment has been a park. There have already been financial commitments toward the development of a park on the land in the 2013 budget.

An application for demolition has been submitted but the working group wants to brainstorm ways to salvage the building. Police commander Frank Gross had a great idea of using the building the commemorate law enforcement, as Chicago is one of only a few major metro areas without a museum of this kind. The consensus is that ideas as to what the community wants should be decided and voiced before the demolition occurs.

The working group plans to have community meetings to discuss possible uses and welcomes suggestions from community members. As an example, the 9th district just sold their decommissioned building for $1 and will be developing it into a theater. The working group is interested in the possibility of cultural uses such as that and has been reaching out to cultural institutions.

The latest estimate for closing the building is November or Dec. 1.

Food Truck Social
The possible location on Milwaukee was deemed too disruptive to traffic by the Chicago Department of Transportation, so the new proposed location is the now empty, former AAA Distribution site, on West Chicago Avenue between Wood and Wolcott. The event is being put on by West Town Chamber of Commerce, Empty Bottle Presents and Time Out Chicago on the weekend of Aug. 25-26.

Proceeds will benefit Share Our Strength, a national non-profit, with other local non-profit benefactors, including 10% of the gate proceeds to Commercial Park Advisory Council. EVA would like to request a higher percentage as comparable to other neighborhood festivals. Additionally, better ways of handling trash as well as extra security beyond the boundaries of the festivals are necessary. As an example, Green Music Fest hired a company to take care of the trash and the process was very successful, even including separation of the trash items on site by the patrons.

EVA 30th Anniversary Planning
We will be celebrating EVA’s 30th year as well as the 2nd anniversary of the Chicago Pubic Library in the Goldblatt’s Building (1625 W. Chicago Ave.), which EVA worked hard to save. EVA is the second-oldest neighborhood organization next to Logan Square Neighborhood Association, which has been going for 50 years.

Approximately $750 was raised for our 30th Anniversary event at the June fundraising dinner at Enoteca Roma.

EVA would like to offer a business membership to represent neighborhood businesses as well as create a business council to give them a voice within the group.

Annual August BBQ
A block party would be great to include neighbors of all ages as well as beer. 3 Floyds has donated a keg and we would like to ask Black Dog Gelato if they would be willing to donate their delicious gelato. Chicago Grand Neighbors Association would also like to participate and they are more than welcome. The location will be nailed down at the EVA board meeting on July 16. Flyers will be prepared and distributed as soon as the details are set.

Liquor Moratoria Issues
Ald. Moreno is considering lifting some liquor moratoria along Ashland, stating that a plan of operations is required by the business and enforceable. However, concerns were raised that the additional businesses allowed to submit for liquor licenses after the first is granted under the lifted area would not have to comply with the same or similar plan of operations.

SSA Expansion
SSA 29 is looking to expand, including parts of our neighborhood, adding Damen from Augusta to Chicago and extending down Ashland. It looks as though this will mean approximately $800/year tax increase on a three-flat.

The question was brought up as to how residents were informed, as many meeting attendees had not heard of the possible expansion.

The issue will be discussed further at the EVA Board Meeting on July 16.

West Town Street Lab
Meghan Quinn is still on the lookout for artists who would like to show their work in vacant storefronts along West Chicago Avenue. Additionally, any owners of vacant spaces who would like display the work of wonderful local artists please send an email to Meghan at meghan_quinn@yahoo.com.

The first pop-up gallery at 1363 W Chicago has been a great success and will be closing on July 19. Stop by to check out some wonderful artwork by Veronica Bruce and Brooke Bennett.

CAPS
There was no CAPS meeting due to the July 4 holiday. The next meeting will be held on Wednesday, Aug. 1.

Parks Meet at Commercial Park for neighborhood clean up on July 14 at 9am. Don’t forget to bring your own gloves.

On Thursday, Aug. 16 there will be a Movie in the Park event showing "The Wizard of Oz." The event will start around 7pm.