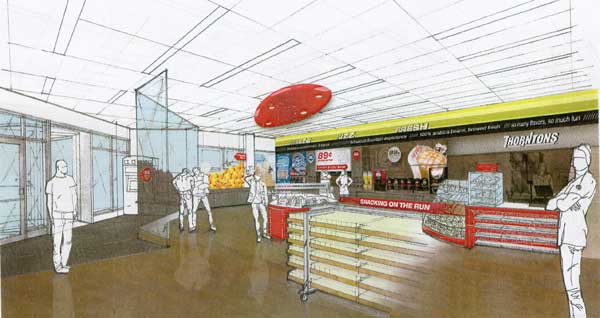 A design for Thorntons Urban Market at 1555 W. Division St. by Ideation Studio

Transition to new board

Neal McKnight and KK Goh planned to meet April 12 regarding banking. Meghan Quinn is now in possession of electronic membership lists; she will email minutes to Stephen Rynkiewicz for approval and posting on the website.

The board approved the SquareUp.com processing system so that we can more easily sign up new members at meetings and events.

McKnight suggested that in cases when we have no guest speaker we substitute with an update of ongoing developments in the neighborhood (most likely given by Scott Rappe or Neal McKnight). Someone from Comrade Cycles will be presenting at the May meeting. Gladys Alcazar-Anselmo suggested we have Chicago Athletic Club speak at the June meeting as the chain is opening a location on Division. She will contact the management.

Tom Tomek made and distributed through e-mail a Google map showing his proposed placement of about 42 new East Village signs. After walking Chicago Avenue from the expressway west to Damen, he felt that the larger intersections do not need the signs as there is already too much visual clutter. McKnight suggested installing signs on Damen and on Augusta. Though they are larger streets, they are more residential and would benefit from the signage. They will be left off Division and off Chicago.

Tomek will send the map to Joe at Chicago Event Graphics. Metal L-brackets and S-hooks will need to be purchased to install the new signs. Tomek brought an example bracket to the meeting and said he would look at Menards and Home Depot for the best options. The group agreed to spend $300-350 for the necessary hardware.

The old East Village signs will be taken down and auctioned off at the picnic. 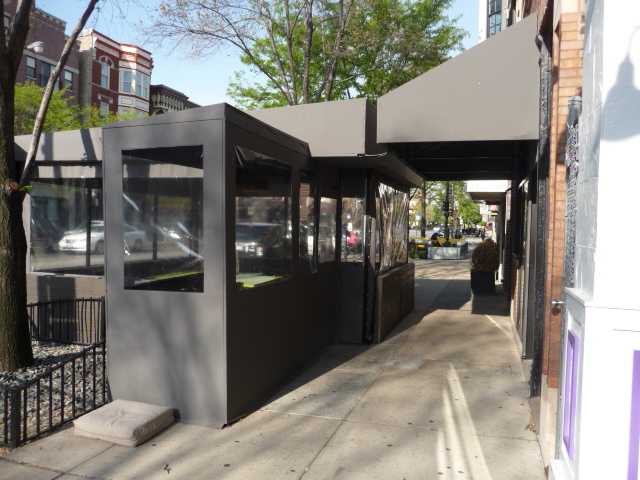 The structure at Mana Food Bar, 1742 W. Division St., is not appropriate for the street. Wicker Park-Bucktown Chamber agrees. Mana assured Scott Rappe that everything has been properly permitted. Rappe verified that this is true but it remains unclear whether the city knew exactly what they were permitting. Mana's description is to screen patrons from the elements, but no drawings or images were presented to the city.

We can have the permit amended by the commissioner. Our goal is to have the wind screen look like everybody else's so more structures don't start appearing along the street. City intent is that roof structures get removed seasonally but Mana plans to leave this one up year-round. The wind-screen permit is good for four years (until 2016) and Mana feels it has been approved through the proper channels. EVA needs to take steps to get the permit amended so the issue does not have to be revisited with other businesses.

McKnight suggested we treat Division as a pilot project to gather multiple groups (EVA, Wicker Park Chamber & SSA) to look at the permit applications more closely and go to the alderman with the information. Greg Nagel is on the zoning board of Wicker Park/Bucktown Chamber and will ask Ann Nolan if the group wants to be involved. McKnight will speak to Wayne Janik about being involved as well. Rappe is asking the Chicago Department of Transportation to reissue a letter regarding the current streetscape requirements.

Barry Nemerow (owner of the property) and Rick Claes (principal of Bluestone Diversified Investments, the developer representing Thorntons) presented a proposal for Thorntons Urban Market at 1555 W. Division, the former Washington Mutual bank site. The proposed market will take the entire ground floor of the building.

Thorntons Inc. is seeking a license to sell beer and wine only (no hard liquor) and is willing to agree to restrictions since the license from the city will not be segregated in this way. Thorntons is a family owned, regional chain based in Louisville with 170+ convenience stores in 5 states (KY, IN, IL, OH, TN). There are 39 Chicago area stores that sell packaged beer and wine.

One concern of EVA is the store's plans for loading goods, as this is a busy six-corner intersection with a pedestrian designation and children from many nearby schools. The floor plan in the proposal does not show a loading entrance. Claes does not currently have a solution but will have to explore options and address the issue just as CVS does across the way.

Claes has signed a 5-year lease with two 5-year options. The lease is contingent on getting building permits and the beer & wine license. If Thorntons does not get the license, it will not open the store. The building owners agreed to give the developer until May 10 on contingency. Thorntons realizes that this is not enough time to get through the city but if neighborhood groups and the alderman approve, then they would make a reasonable decision to move forward without official city approval.

Another concern raised by EVA was who would hold the liquor license. Applying for a license under company distinction is important due to the ease of transferring the license.

Thorntons agreed to a restriction that they would never sell gas at this location, even if the Urban Market model fails. The question remained how this restriction would be enforced.

Thorntons has requested control over the billboard on top of the building. The property owner currently has leased the billboard to someone else.

EVA asked what Thorntons would do as far as a covenant to restrict their product line. Claes responded that the stores are run by field-level employees so there would have to be some objective way to document complaints for the store to respond in a reasonable manner.

He stated that Thorntons has 134 licenses in 5 states and only 6 violations in the past five years for selling to minors. It was pointed out that the problem at this site isn't so much underage customers as transients. Claes stated that Thorntons anticipates clients who live two to four blocks from the store. Thorntons doesn't want to cause problems or create a nuisance for their neighbors. The chain plans to sell higher-end wine than CVS.

Greg Nagel stated that EVA's policy is usually not to accept anything like this, especially not a large chain. McKnight pointed out that 52% of the projected business is devoted to tobacco, alcohol, candy and snacks. Why would a community group support this use? Claes responded that most of the local urban markets fail within a year or so and that this space has been empty for 2.5 to 3 years. Thorntons sees beer & wine sales as ancillary to grab-and-go food sales. With $2.5 million to $3 million in annual sales, the store would set a positive economic standard for the neighborhood. Thorntons feels that this location presents an opportunity for the area to have a good option take home food aside from restaurant takeout.

Rappe will send follow-up questions from EVA and we will continue the conversation.

In discussion, board members saw many negative issues raised by the presentation: a large neon sign on the corner, a large regional company rather than local, a lost opportunity to put something unique in that location, Thorntons' lack of experience with an urban business model, the expectation that without a moratorium Garden Gourmet would get a license as well, and the lack of a plan for daily loading and unloading.

It was discussed that EVA should be more proactive in attracting the businesses we want. As a board we should articulate what would be compelling reasons to lift a moratorium. McKnight suggested we give a chance to Wicker Park Committee and Pulaski Park Neighbors to weigh in. Proco Joe Moreno is the alderman at this site.

McKnight suggested that we take an inventory of the existing moratoria and decide what we think about each site. Ideally we would have one set of criteria but it may change based on location. We also will start a discussion with aldermen and/or the liquor commission about the possibility of a modified liquor license (i.e. only beer & wine) so that we wouldn't have to enter into unenforceable covenants with business owners.

Alcazar-Anselmo has done a lot of work thus far and the West Town branch library at 1625 W. Chicago is on board as the location for a celebration and membership drive.

It was decided that we will shoot for a target date of Sept. 12 or 13. Landmarks Preservation Council of Illinois is interested in participating. Alcazar-Anselmo has gotten in touch with old EVA members to help plan and implement events.

For startup money we will hold EVA Dinner Night at a restaurant and a percentage of the proceeds will go to the event. Joe Hunnewinkel is creating a 30th anniversary special issue that can be used as community outreach and marketing. He will create a theme that will also be featured on T-shirts.

In addition to the celebration and a press kit, there is also a history and storytelling component to the project that is being worked on by the prior members of EVA.

EVA will write a letter of support for the West Town Street Lab arts initiative.

On the empty lot south of Commercial Park at 1834-50 W. Chicago Ave. there has been a proposal for 3 separate structures by North/Clybourn Group with Hanna Architects. The project will have commercial tenants on the ground floor and residential above. The project is within ordinary zoning and traffic will enter through the back.