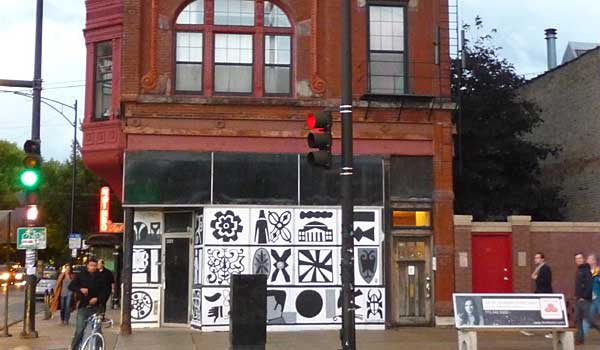 Ald. Robert Fioretti began the meeting with a presentation described here on the 2nd Ward and its redistricting to include East Village.

The project seeks to bring art and culture to our everyday experience and show the creativity of West Town residents. This initiative could also generate economic development in the neighborhood. EVA president Neal McKnight mentioned that Ken Kosinski might be interested in doing something on his vacant lot between Wood and Wolcott.

Quinn said Katharine Wakem, program manager for the city's Special Service Area 29, has expressed interest in the project but was concerned about insurance: The West Town Chamber of Commerce tried to do a community art presentation on vacant storefronts but could not get proper insurance. A couple of members mentioned that the Wicker Park-Bucktown SSA has been able to do similar projects, and McKnight suggested that Michelle Starks of State Farm may be able to help with insurance.

EVA members voted and decided to write a letter of support for the project. 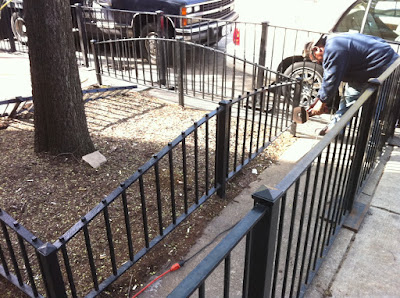 Wrought-iron fence is removed in March at the Anthem tavern, 1725 W. Division St.

The tree pits have been restored this afternoon at Anthem after the city cited the bar for removing city fencing. We are still waiting to hear about the punishment to be given if any. Ronda Locke spoke about the Earth Day cleanup on April 21, for which volunteers are needed.

We would like to improve membership and are considering using the Square credit card reader to let people join more easily at meetings. The processing fee is 2.75% per swipe.

Gladys Alcazar-Anselmo had some ideas about the 30th anniversary of EVA. She feels we should document photos and stories of our 30 years, which we could sell as a 30th anniversary booklet and promotional piece. Because saving the Goldblatt’s building at 1625 W. Chicago Ave. was one of EVA's biggest projects, we could hold an event there.

McKnight and Scott Rappe have been working to make information sharing among the neighborhood groups better. Neal has reached out to Chicago Grand Neighbors Association.

On the Miller Lumber apartment project, we successfully got the proposed number of units from 52 down to 39 (4 of which will be affordable units), and parking reduced to 35 cars, meaning there will no longer be a curb cut and all traffic will be routed through the alley.

Peter Locke testified before the city zoning committee to extend the Chicago Avenue pedestrian designation from Ashland to Damen. The issue passed out of the zoning committee.

Roots Handmade Pizza, 1924 W. Chicago Ave., has put up a "Respect Your Neighbors" sign and has been trying to get deliveries off of Winchester by sending letters to vendors. Public Way inspectors have cited some businesses for blocking the street.

Two packaged goods licenses are being sought in areas covered by Chicago's license moratorium. The first is the Garden Gourmet on the 1100 block of North Ashland Avenue, the second is a Thornton’s convenience store on the former Washington Mutual bank site at Ashland and Division.

Thornton’s said that it will require liquor sales to compete with the CVS pharmacy that sells liquor diagonally across from the site. A member noted that EVA was against CVS's application for a liquor license, but CVS was awarded one nevertheless.

EVA will be vetting both requests, asking the operators to speak at one of our meetings. If a moratorium is lifted, businesses on both sides of the street for a couple of blocks surrounding that business will become eligible to apply for a liquor license.

There was no CAPS report since Tom Tomek is on vacation. There is a CAPS meeting this week at police headquarters.

Pritzker school, 2009 W. Schiller St., attracted 600 people to the performance of "Fiddler on the Roof," a great turnout. The next show will be "101 Dalmatians" in May or June. Also, it was publicized that many students from Pritzker have been getting into selective-admission high schools, a testament to the quality of the school.

Ronda Locke is looking for someone to dedicate one hour on one Tuesday a month to Green Team Growers to help kids plant and take care of a garden. Contact her if you are interested or know anyone who would be. Also, Green Star Movement, who designed the beautiful mural outside LaSalle II school at Honore and Division, will do something similar at Commercial Park, 1845 W. Rice St.

We are still awaiting word from the Public Building Commission about the 13th police district station at 937 N. Wood St. The mayor’s office said it seems likely it will be a park. Ronda Locke’s latest estimate is that the 13th will be closing in October so we will have time to get a wish list together for what we want to see happen at the site.

Omar Sweiss from Red Apple attended the meeting and made a quick statement. He stressed that there is no moratorium at the Red Apple site. He came to the meeting in good faith still wanting to work with EVA regardless of the group sending opposition letters against their liquor license request. Red Apple has 800 petition signatures in its support. The owners decided to not withdraw their application as EVA requested since they spent money applying. McKnight suggested that Sweiss put his thoughts in writing and submit them to the EVA PP&D committee.

Meeting commenced at 7:08 pm at Happy Village, 1059 N. Wolcott; no Business Minute today as a representative from Comrade Cycles couldn’t make it due to a last minute issue. Comrade Cycles will appear at the May membership meeting instead.