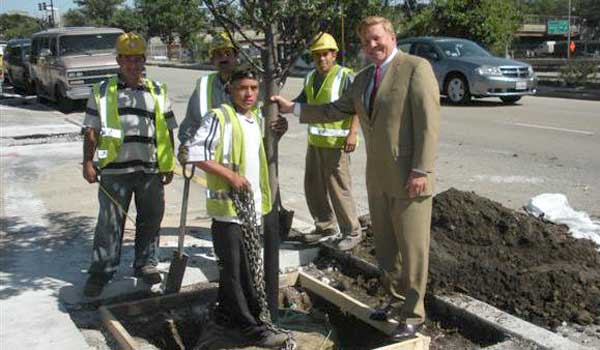 Ald. Robert Fioretti carries three things in his car: paint to cover graffiti (he doesn’t always wait for 311 to do it), a scraper to remove posters, and clippers to remove illegal signs.

Chicago's 2nd Ward was redrawn Jan. 19 to include parts of East Village. In his first meeting April 2 with East Village Association members, Fioretti said Chicago has to build up its infrastructure and schools. Fioretti stated that we must collaborate to move our communities forward. New city landmark districts include the 2nd Ward's Motor Row and Music Row, joining the Prairie Avenue district created in 1979.

Every home should have a tree, Fioretti said. He said his ward has removed every dead tree and planted 1,600 trees over four years.

The ward has obtained resurfaced 250+ blocks of streets, and secured funds to improve parks and schools. There are 26 parks in the 2nd Ward, he said, with 3 new parks under construction. In visiting this neighborhood, Fioretti said he has seen outdated lighting that needs to be upgraded for safety.

Fioretti recognized community groups for their hard work with little recognition. The alderman said he can relate from serving with other groups and foundations. He said he planned to serve as president of the Historic Pullman Foundation for only 2 years but ended up staying on for 8 years, working hard to repair the clock tower after a tragic fire.

Liquor licenses are a right and not a privilege, Fioretti told EVA members. He said he has closed down liquor stores that were not good corporate citizens.br>
For trash pickup he proposed a grid system 2½ years ago to make it more efficient. The 2nd Ward has only three garbage trucks for 249 alleys.

Many of Fioretti's new constituents have been voting in the 32nd Ward. EVA's Gladys Alcazar-Anselmo told Fioretti that the East Village portion of the 32nd Ward has been neglected and asked how he determines what gets done and what doesn’t. Fioretti said every area can be addressed in a 4-year term. Currently he holds town-hall meetings and tries to implement participants' requests. He also drives around with the ward streets and sanitation commissioner and police commander to identify and address hot spots.

Former EVA president Greg Nagel noted that EVA has developed working relationships with past aldermen, and asked Fioretti how we as residents should interact with him on community concerns. Fioretti reiterated the importance of community groups and said that he would send people asking for things such as liquor licenses to the community groups and make sure he knew the community’s stance before deciding on an issue.

Neal McKnight, the current EVA president, asked Fioretti when he thinks the ward remap will go into effect. Fioretti stated that legally it will not take effect until after the next election in 2015. We should be contacting 32nd Ward Ald. Scott Waguespack until told otherwise, but it was agreed that keeping Fioretti in the loop would be beneficial since we he will eventually be our contact. Fioretti said the remap splits communities, which he finds unfortunate.