Be a nosy neighbor 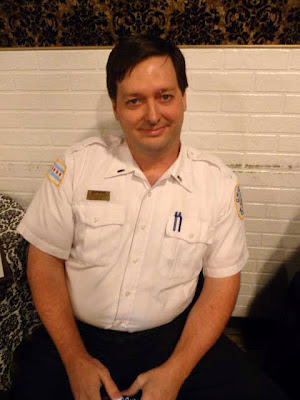 This advice was a standing headline in issues of the East Village Association newsletter a generation ago, and it still holds true.

At Monday's EVA meeting Molly Murray, the volunteer Chicago Alternative Policing Strategy coordinator for East Village, recounted the testimony of ex-convicts assembled by the Safer Foundation for a July police seminar: Burglars would steer clear of a neighborhood where a resident stops and asks if they were looking for someone.

And nosy neighbors get things done. Ronda Locke, 1st Ward police liaison, said that at the city's 911 call center not even gang mentions trigger a faster police response than a report of suspicious activity.

A thorough description of the suspect is what police find most valuable, said Lt. Roy Whitmore, filling in for Cmdr. Frank Gross as EVA members discussed neighborhood response to crime. That's everything from age, height and skin tone to shoes, jacket insignia and other clothing details.

Phoning 911 is the right call even in non-emergency situations, Locke said: The dispatch center can quickly move a call to the team that handles 311 city service requests. Operators often are more adroit in getting a police response than calls directly to the district. But it may take persistence or a supervisor's intervention, Locke admitted, because operators' skill levels can vary.

The CAPS program in 2008 produced these tips on calling 911:

If you do not get an immediate response, do not hang up and call again. This will only put you at the end of the waiting list.

Situations that involve threat to life, bodily injury or major property damage or loss are the highest priorities. Police claimed to respond to these calls in 10 minutes or less.

Provide as much information on the situation as possible. Operators ask questions about the persons or autos involved in an accident. If you request an ambulance, the operator will ask about medical history.

If you wish to remain anonymous, say that when the operator answers.

Operators will not have your exact location from a cell phone. They'll ask for your name, approximate location and the phone number.