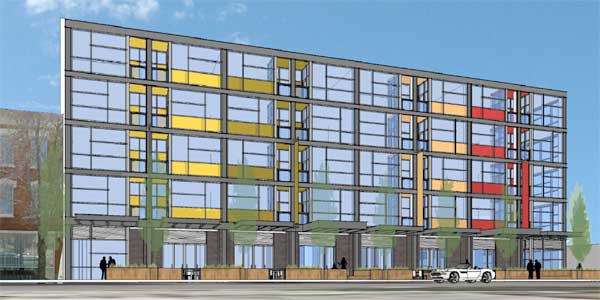 A four-month-old plan has resurfaced for 52 apartments on the site of the L. Miller & Sons lumberyard, 1815 W. Division St. Ald. Proco Joe Moreno will discuss mixed-use development of the site in a March 6 public meeting.

The 1st Ward office did not disclose details of the Smith Partners proposal or respond to a request for details. But development attorney Rolando Acosta briefed East Village Association planning co-chair Scott Rappe last year on a five-story plan for the site, with 9,000 square feet of ground-floor retail space.

Rappe briefed EVA directors in November and in turn relayed their concerns about the project's height and density. Acosta did not respond to Rappe's suggestion that Smith Partners limit the project to four stories.

The number of apartments and their small size, 622 to 926 square feet, were among the points of contention. So was the height precedent and the impact on traffic and parking in a location across from an elementary school. The location's only public transit other than LaSalle II Magnet School buses is the 70 Division route on the CTA.

October 2011 renderings were drafted by Berkelhamer Architects. Antunovich Associates was the architect of record, and Smithfield Construction Group was identified as contractor. The EVA board reviewed black-and-white copies of the renderings. Rappe's e-mail response to Acosta follows, as well as the renderings.


The East Village Association board discussed the proposal informally at our meeting Monday. Before we schedule a formal presentation, I want to relay some comments:

1. While EVA has actively encouraged increased density at the 1601 W. Division site, this site is different in that the proposed increased unit count are likely to have a greater impact on the adjacent neighborhood core. The East Village Association worked with previous aldermen to establish the current zoning designation of B3-2 in order to ensure that new development is consistent with the existing vintage buildings in height and density. We are also concerned that the requested zoning change would eventually create pressure to demolish existing high-quality vintage buildings simply because they do not maximize this higher density. Thus, we are not inclined to support a zoning change that would deviate from this longstanding policy.

2. There is great concern about the increase in traffic directly across from LaSalle Language Academy and its impact on the safety of children walking to school. We are unlikely to support a curbcut in close proximity to the existing alley, and suggest that the parking layout be revised so that all traffic uses the existing alley.

3. We are concerned about safety and aesthetics related to the parking lot. Open parking is inconsistent with the residential character of this block; we would prefer to see the building come to the ground where it overhangs the parking, and an appropriate screen where the parking is uncovered.

4. The site plan and renderings seem to indicate the tree pits that are currently missing would be replaced, but that they would be offset from the existing tree line. The East Village Association was a key player in establishing the streetscaping design that has contributed to the success of Division Street. We would like to see the missing streets aping elements restored in a manner consistent with the original design.

We strongly encourage your client to work within the existing B3-2 zoning. A four-story, thirty-nine unit building would be appropriate to the site, and we would likely support a reduction in the parking requirement, if some spaces were dedicated to a car-sharing service. Please call me if you have any questions.