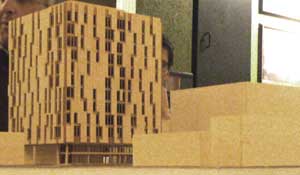 An unusually open development process at the former Pizza Hut lot continues Feb. 27 with a public hearing by Ald. Proco Joe Moreno, whose opinion has weight in City Council votes to follow.

The site at 1601 W. Division will be reviewed in a 6 pm meeting at Near North Montessori School, 1434 W. Division St.

Current plans call for 110 to 119 studio- to 2-bedroom apartments, a PNC bank and storefronts in an 11-story building. The project would require zoning changes and a planned development ordinance to waive height limits and parking requirements.

Since Pizza Hut shut its doors five years ago, EVA has been promoting development that makes the most of the site's direct access to the CTA Blue Line station and bus connections. Planning co-chair Scott Rappe summarized EVA's Polish Triangle planning goals in a Feb. 6 statement. Text of the letter follows.

Since 2007, when the above referenced property became available, the East Village Association has advocated for a development that was appropriate to its prominent location on the Polish Triangle, took advantage of its proximity to public transit and had the potential to become a local landmark.

The property was purchased in 2011 by Rob Buono and Paul Utigard, who are proposing a development that appears to meet the four criteria set forth by the East Village Association for the redevelopment of this property:

1. Significant presence: The eleven story height of the proposed building will give it a significant presence on the site, anchoring the corner and, along with the landmark Home Bank & Trust Building, will create a gateway to the thriving Division Street retail/restaurant district to the west.

2. High Density: The proposed size of the building will provide approximately 100 rental units, strengthening the demand for local retail businesses and positively impacting street activity and safety on the Polish Triangle.

3. Mixed-Use: In addition to residential units, the proposed building will add retail space along Division Street where none currently exists, and provide for office space on the second floor.

4. Pedestrian & Public Transit Friendly: The proposed building will provide limited on-site parking thereby encouraging the use of the adjacent public transit, and increasing pedestrian safety by limiting automobile traffic on and off the site. Indoor resident bicycle storage and a number of affordable units will attract renters without automobiles.

Messrs. Buono and Utigard have met with the East Village Association on numerous occasions as they have developed their proposal. We have found them to be open, receptive to our suggestions and responsive to our concerns. Together, we have discussed a variety of issues, and ways to address them, and we look forward to seeing their resolution in the final PD proposal. These include:

We are encouraged by what we have seen so far and ask that you support the application, with the caveat that the East Village Association be kept apprised of the process and retain an active role as the specifics of the PD are negotiated.