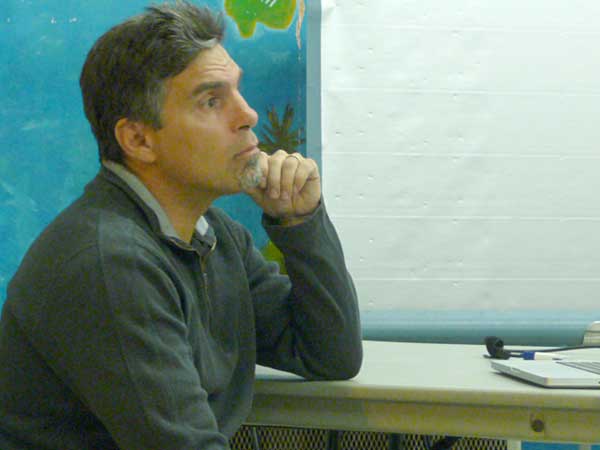 Members are identified by first name, last initial and proximity. They can request confidentially to borrow tools or use skills of nearby members. A system will be added to rate satisfaction with borrowers or service providers, Templeton said. Nagel noted that the site allows EVA members to circulate fliers within the group.

Buono's presentation to the committee indicates one parking space for every three apartments. That's consistent with the location at a Blue Line hub. However, Aaron Bilton suggested that high-end apartment tenants would own cars nonetheless.

Miller Lumber: The committee also has reviewed what Rappe called a trial balloon for development of the L. Miller & Sons lumber warehouse at 1815 W. Division St. An apartment building one story taller than the Prasino restaurant at 1846 W. Division would have 52 units, compared with 18 allowed under current zoning. Reviewers found the density and parking allowances inappropriate for the site, which faces LaSalle II school's entrance and lacks the Polish Triangle's transit access.

Police station closing update: Discovery of asbestos in the demolition of the new station-house site will delay closing of the 13th District station at 937 N. Wood St.

CAPS
Anne Shaw said she is seeking assurances that redrawn beat maps will maintain the neighborhood's police presence. A rally earlier in the day sought better security for streets near the Congress Theater, 2135 N Milwaukee Ave, after a New Year's Eve assault.

New business
Winchester traffic: Roots Handmade Pizza, 1924 W. Chicago Ave., will extend an agreement to close sidewalk cafe and large windows an hour earlier. Deliveries continue to be an issue, as the loading zone and alley are often parked in.

Board of Review: Property tax appeals close Jan. 20 and can be filed online at cookcountyboardofreview.com, Bilton said. The 1st Ward will sponsor a tax workshop Jan. 12 at Haas Park.

Ward redistricting: At Jan. 11 hearing on competing ward maps, EVA will ask for boundaries that do not split East Village.