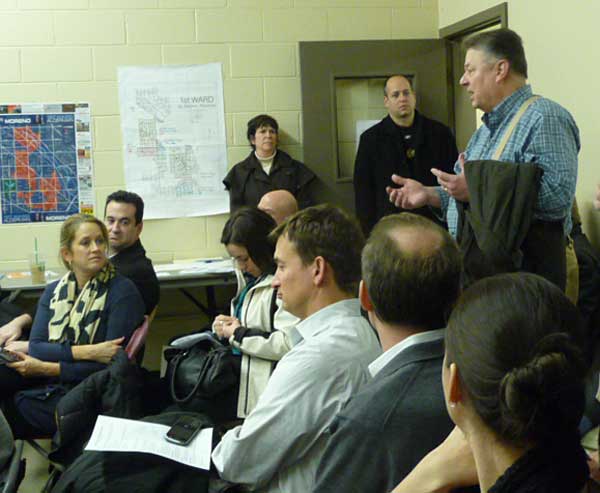 The owner of a vacant lot on Chicago Avenue pledged to work with neighbors in developing the property, which was rejected last year as a music hall.

Ken Kosinski sees 1834-50 W. Chicago Ave. as a "middle anchor" between the Dominick's Finer Foods and Goldblatt's buildings, he told more than 50 people attending a public hearing Monday at the adjoining Commercial Club Park. Plans might build a path to the playlot at 845 W. Rice St. or address another community need, Kosinski suggested.

The East Village Association contacted Ken and Lois Kosinski after they inherited and tore down the former AAA Distributing Co. auto warehouse. Kosinski said his family grew up in the neighborhood and that he saw the property as a catalyst for further development. "With the right input we can really do something special," Kosinski said.

At Monday's hearing Moreno volunteered that he had contacted the Chicago Community Trust, unsuccessfully seeking funds to expand the park. 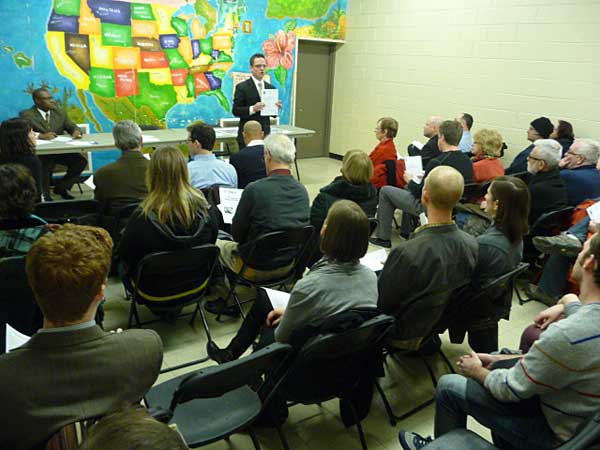 In 2010 EVA members approved a plan for a restaurant and concert venue there, operated by New York's Brooklyn Bowl. Sound-proofing and parking issues led managing partner Peter Shapiro last year to abandon his plans to lease and renovate the AAA building.

Asked for an update, Moreno said he has been trying to persuade Shapiro to locate elsewhere in the 1st Ward. Moreno did not say which if any sites he suggested.

The ordinance would tuck parking behind any new building. Kosinski was not ready to endorse the change. "We have to put all those cars someplace," he said.

The measure would ban drive-throughs and ease off-street parking requirements so that buildings face the sidewalk, encouraging foot traffic and discouraging crime. "The idea is to have a connection between what's happening in these stores and out on the street," said Steven Valenziano, a city Housing and Economic Development administrator.

The EVA board has been supporting the ordinance. "The really cute shopping along Armitage and Halsted, that doesn't just happen," said president Greg Nagel. "The zoning of those streets laid the groundwork."

As the hearing was nearing a close, Moreno told a questioner that he was waiting for the West Town Chamber of Commerce to weigh in, and that he would not take a community vote. He said it would be his decision whether to move the measure to the City Council.

"If we are going to change the zoning, it would be sooner rather than later," Moreno said, suggesting a City Council hearing in March. "There's benefits and downsides to any zoning change, and frankly that's probably why most alderman did this [zoning review] in their offices."
Business Luxe On Chicago Stephen Rynkiewicz