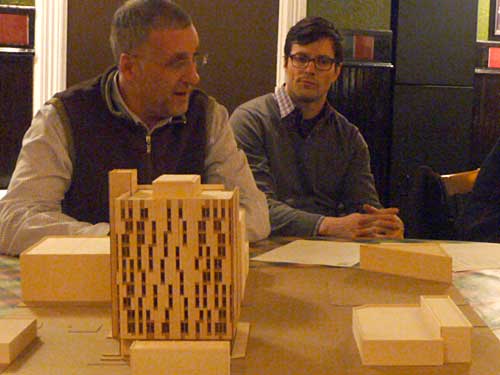 Rob Buono, with the development project at 1601 W. Division, presented plans for the site to the board and the Marshfield Avenue neighbors group. Neighbors expressed concerns about parking, a drive-through and increased dog waste.

The project will have 35 parking spaces, 20 on the site and 15 on the Wendy's property. Marshfield residents requested a change to zone parking and Ronda Locke with the 1st Ward office stated the staff will get started on that now. A disclosure could be made to prospective tenants that they would not be eligible to park on the 1100 block of Marshfield. The developers agreed to discuss this further.

A bank will occupy the south side of the first level with one drive-through in the alley. No left turn will be allowed off Division Street into the drive-through, and those exiting can only go south on Ashland Avenue.

Tenants will be allowed pets. The concern for increased dog waste was brought up. A suggestion was made to the developers to purchase bag dispensers with waste disposal along their property to help decrease this nuisance.

Dog waste
Dana Palmer made the motion for EVA to purchase 10 bag dispensers to be placed throughout East Village to help alleviate the dog waste issue.

EVA signs
Tom Tomek will speak with the ward office about getting the new East Village signs installed.

Chicago Avenue Pedestrian Designation
EVA was requested to write a letter in support of a pedestrian designation along Chicago Avenue. Scott Rappe moved that the East Village Association supports the extension of the existing Pedestrian Street designation from Wood Street to Damen Avenue. Greg Nagel seconded the motion and it was passed unanimously. Rappe will write the letter.

Red Apple curbside delivery
Rappe will follow up in regard to this issue.

Feb. 6 membership meeting
Peter Locke with Local First Chicago and Chicago Neighborhoods First will be the guest speaker. Neal McKnight will ask Garden Gourmet Chicago to be the business minute.