Liquor at Polish Triangle! Say it ain't so, Joe 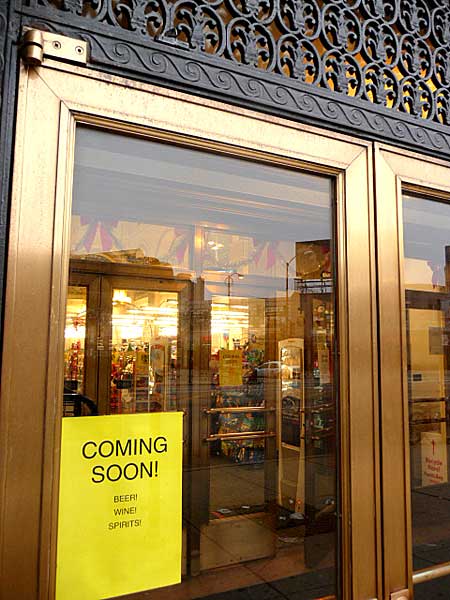 Last month the East Village Association learned that Ald. Proco Joe Moreno introduced and the City Council passed legislation lifting a longstanding packaged liquor moratorium on Ashland Avenue, from Division Street to Blackhawk Street. The sole purpose of this legislation was to grant a liquor license to the national retailer CVS Pharmacy.

This single-purpose legislation was introduced and passed without the input of the community, and calls into question Ald. Moreno’s commitment to transparency and local business.

The East Village Association, the Wicker Park Bucktown Chamber of Commerce and Near North Montessori School all opposed lifting the moratorium. The Wicker Park Committee requested that no action be taken until CVS made a presentation, which never happened.

All of these groups have been working for years to improve the Polish Triangle, and all are concerned that liquor sales will set back their efforts to improve the Division-Ashland-Milwaukee intersection.

Ald. Moreno simply could have told these community groups that he planned to lift the moratorium and grant the license with concessions. Instead, the legislation was introduced and passed without addressing community concerns. Members of the community learned of this decision after the legislation had passed, We found out by walking past CVS and seeing a beer and wine "Coming soon!" sign.

This decision has multiple consequences. First, because Ald. Moreno introduced and the City Council passed this legislation, multiple locations on Ashland Avenue are now available to sell package liquor. This may exacerbate ongoing issues that relate to liquor sales.

The Polish Triangle has had lasting problems with vagrancy, public consumption of alcohol and public intoxication. The problem was so bad that Ald. Moreno just this past year ordered the benches removed from the Polish Triangle. This type of activity impacts both the 13th and 14th police districts. We do not need to create new crime problems or exacerbate an existing problem. 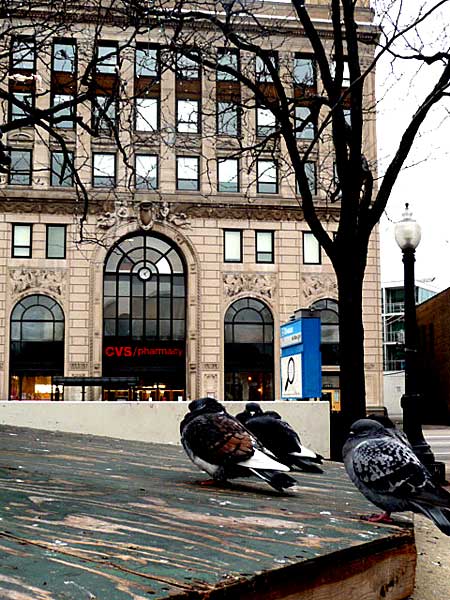 Nelson Algren Fountain at the Polish Triangle
In addition, by lifting the moratorium and granting CVS a liquor license Ald. Moreno will discourage the development of local business.

CVS has more than 7,000 locations around the country and can be a formidable competitor, in the same way Wal-Mart is formidable. This legislation creates a new hurdle to attracting a responsible, independent wine shop to the area. The East Village Association last year attempted to accommodate just such a locally owned liquor store.

EVA explored modifying an existing package liquor moratorium in the empty Washington Mutual space at 1555 W. Division. When the local family that proposed the wine shop learned that CVS was seeking a liquor license, they withdrew the plan. They said would be undercut on price and driven out of business.

EVA tried to reassure the family that a different moratorium in place across the street would keep the gargantuan retailer from getting a liquor license. They obviously had a better handle on the situation, and did not waste time, energy and money in an venture the alderman would undermine. Ald. Moreno has now cemented a national liquor retailer in our community that will effectively exclude a locally owned, locally responsive business.

EVA simply does not understand this decision based upon Ald. Moreno’s previous stances against making zoning changes to accommodate national retailers. This decision is all the more troubling because Division Street and Wicker Park have gained a national recognition as a shopping destination anchored by locally owned and operated businesses.

Ald. Moreno states that “CVS agreed to some restrictions on the type and packaging of beer and liquor that would be sold, and since CVS is a well-regarded corporation,” operating in multiple locations in his ward, he supported the single-purpose legislation. Not so fast. Do you know who you are dealing with?

Another unit of CVS Caremark Corp., sued by the Illinois Attorney General and 27 other attorneys general, in 2008 settled a deceptive practices case for $38.5 million arising out of its marketing of prescription drugs. Just two years later in October 2010, CVS agreed to pay $75 million and forfeit $2.6 million in profits from the sale of products containing pseudophedrine, which is used to make methamphetimine.

At the time it was the largest civil penalty paid under the Controlled Substances Act. CVS admitted that stores did not monitor excessive purchases, and the U.S. Attorney stated that CVS failed to follow its ethical and legal responsibilities. If CVS has difficulty curbing the sale of nasal decongestant, what steps would it take to control the sale of liquor?

Ald. Moreno did not take the time to confer with the local community groups on these issues. Based upon CVS's record and the location of this store, the community at least should have been given the chance to weigh in on control issues. What restrictions did Moreno pursue? How was any agreement documented? How will it be enforced? We still do not know. These questions should have been vetted by the community before the moratorium was lifted.

Decisions have consequences that are not immediately obvious. Community input helps legislators and executives understand the risks. Governing is messy and sometimes disappoints people. In this case, Ald. Moreno's lack of transparency disappointed residents and organizations that are trying to bring lasting, sustainable improvements to the Polish Triangle.

Because Ald. Moreno did not want to share his pro-national retailer decision directly with the community, EVA has a simple suggestion for him to restore confidence: Live up to your stated commitment to transparency and post on your website all of your proposed legislation, including zoning changes, prior to introducing them to the City Council. That way the community can review these changes and head off bad decisions. That way voters will not have to say “Say it ain't so, Joe, say it ain't so.”