LaSalle II Magnet School
Before a meeting with Chicago Public Schools administrators, Neal McKnight issued a board statement seeking commitments for 50% of at-large admissions to neighborhood students at LaSalle II, 1148 N. Honore, and for retention of the foreign-language curriculum. The neighborhood quota, negotiated by former Ald. Manny Flores at the school's opening, has yet to be implemented. 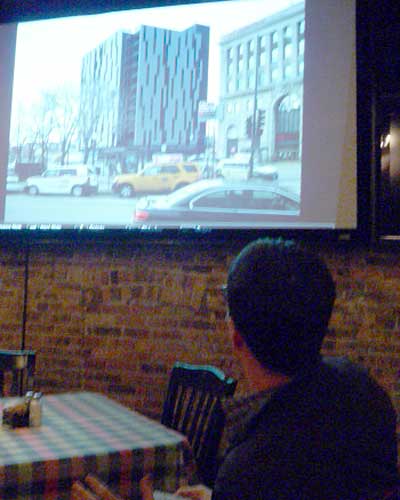 Wicker Park's Coyote building, the Northwest Tower at 1608 N. Milwaukee Ave., is 12 stories tall; across the Polish Triangle, Noble Square Cooperative at 1165 N. Milwaukee Ave. spans 28 stories. "We feel this site in a way is addressing the Triangle in a more direct way," said developer Rob Buono, noting the contrast with CVS, a former bank building. "We want something iconic." 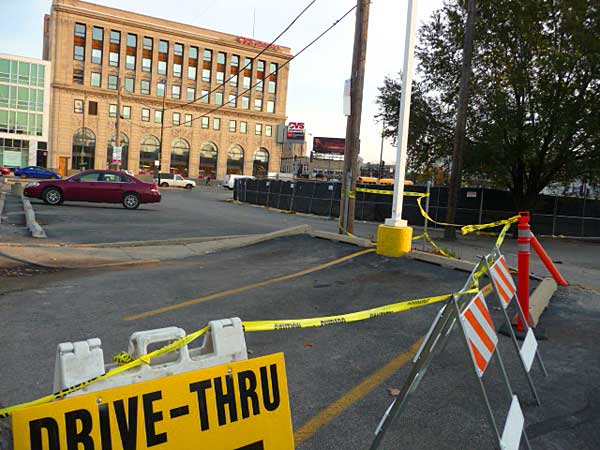 The development would have 110 to 119 studio to 2-bedroom apartments. Parking provisions have not changed, with Wendy's on board to share its lot. The elevator tower's west face might frame a tall billboard: an art project promoting a tenant.

Scott Rappe said the Chicago Department of Transportation is considering a potential kiosk vendor at the Triangle. Buono is interested in contributing to a "significant" Polish Triangle improvement.

Ruxbin Kitchen
The Ruxbin group has withdrawn plans for a package license following suggestions from Rappe that would accommodate a restaurant bar at 851 N. Ashland Ave.

Chicago Avenue pedestrian street
Ald. Moreno plans a public hearing on extending Pedestrian Street rules along Chicago Avenue between Damen Avenue and Wood Street. Neal McKnight will set up a meeting with the owner of 1834-50 W. Chicago Ave., which has been razed; Rappe will circulate a letter on the issue.

East Village branding
Wakem and board members compared notes on sign installation vendors and on ways to facilitate communication among neighborhood and business groups.