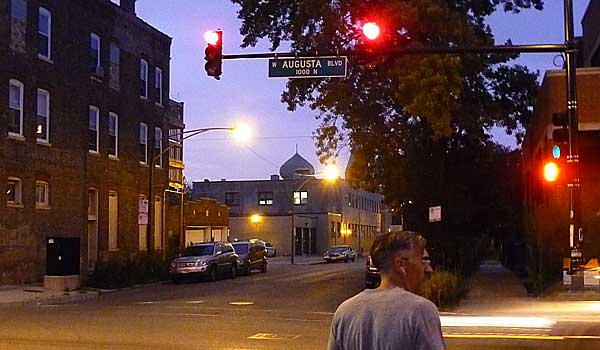 When residents gather at the Wood Street police station Wednesday for the monthly East Village CAPS meeting, crime is likely to take a back seat to the cop shop itself.

The 13th District station house at 937 N. Wood might be eliminated in next year's city budget, which Mayor Rahm Emanuel submits to the City Council this month. Although the location has been a target for a generation, reports of its potential lockdown have prompted circulation of an "Act Now" handbill in the neighborhood.

Modernizing the 13th squad would be more economical than a distant relocation, according to the broadside, and its closing would lead to "reduced police responsiveness ... an erosion of public safety and more 'broken windows' in this great neighborhood."

Anne Shaw, a local attorney, has created an online petition to save the Wood Street station. There's a Facebook page where you can "Like" the 13th District, and a growing comment board on EveryBlock.

The flier suggests that neighbors contact the local aldermen (linked at left), the police superintendent, the Chamber of Commerce, the mayor's office and the East Village Association.

"We're being punished for having an active community and good police officers," said EVA vice president Neal McKnight, suggesting that its low crime rate put the district at risk for consolidation.

EVA was challenged on its position, restated here last month, to retain the site for community use in the district's "eventual relocation." Scott Rappe, who co-chairs the planning committee with McKnight, said the intent was to take sale of the property off the table, removing a big incentive to shutter the station.

McKnight indicated the community's first priority should be to retain the current police presence, with officers who know the neighborhood. One alternative, McKnight said, is to establish a police substation in the renovated, city-owned Goldblatt's Building at 1625 W. Chicago. But Locke suggested not much space was available there.

Crime-stoppers likely will find the city budget a more vital topic than the next iPhone. But the gadget's anticipated release has prompted a CAPS reminder not to be so oblivious when using mobile devices.